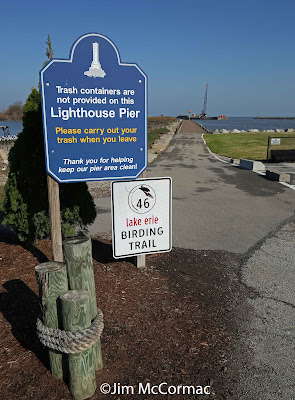 UPDATE: Note below that I lamented the too nice weather during my trip last Wednesday. Well, the weather changed big time the following day, and a few Cave Swallows, a Red Phalarope, and two Franklin's Gulls were found at this very spot yesterday. Then, 22 Franklin's Gulls were in about the exact spot where I photographed the Lesser Black-backed Gull this morning. Bad weather means good birding along Lake Erie.

I visited one of my favorite Lake Erie haunts yesterday, Huron, Ohio and its famed municipal pier. This is stop #46 on the Lake Erie Birding Trail, and one of the lake's true birding hotspots. I've been coming here for many, many years, and have seen lots of great birds from this pier.

My hope was for bad weather, and my plan was to perch by the lighthouse at the pier's end and conduct a "sea watch". Rough weather in November can produce lots of scoters, big numbers of gulls, and perhaps jaegers or other rarities such as Red Phalarope. Alas, the weather was too nice - calm seas and very Indian Summerish, with temps ultimately hitting 60F. Nonetheless, I trundled out the 6/10th mile long pier to the end, with much gear in hand, to see what might happen. 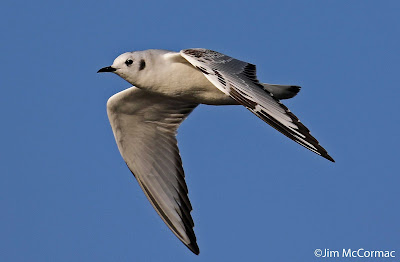 Not much was going on at the lighthouse, which wasn't surprising. The lake was flat and waveless, and skies were blue. Well, at least the light was great for making photographs, so that's what I did. This juvenile Bonaparte's Gull was making a regular loop around the lighthouse, so I committed him/her to pixels. On a cold blustery day in November or December, the Huron River and adjacent Lake Erie can swarm with many thousands of these small gulls, and big concentrations often have rarities like Little Gull in their ranks. 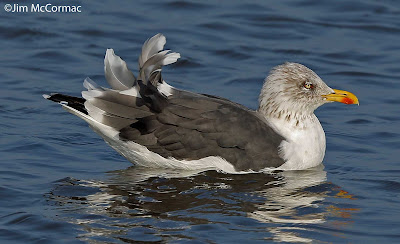 There is a small peaty beach just a stone's throw west of the pier at its juncture with the mainland, and I was pleased to find this beautiful Lesser Black-backed Gull there on my return. I was able to make a wonderful series of images of the bird. I wrote a thumbnail sketch of its status in North America and Ohio a few years back; RIGHT HERE. 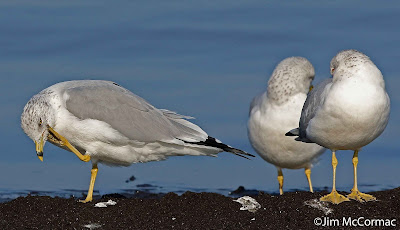 The early morning light offered near-perfect illumination of the several hundred gulls that roosted on the beach and nearshore waters. Given the unlikelihood of rarities due to the nice weather, I settled in to watch the gulls for a while, and secure some images.

Shooting sitting gulls isn't exactly difficult. They're pretty big, and usually relatively unwary. Thus, to avoid gull shots that look like 10,000 other gull shots, I like to try and catch them doing something interesting. If you wait and watch long enough, they will. 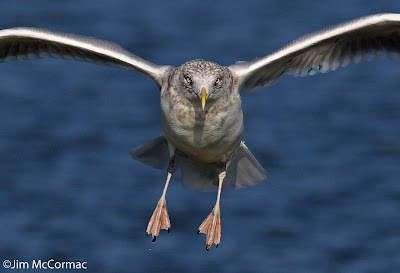 Flying gulls are a few notches up the difficulty scale from perched gulls, but still not too tough to pull off. They are often predictable in their flight patterns, and depending on the wind, frequently fly with a rather languid manner. However, capturing good images of certain of their aerial hijinks can be hard. 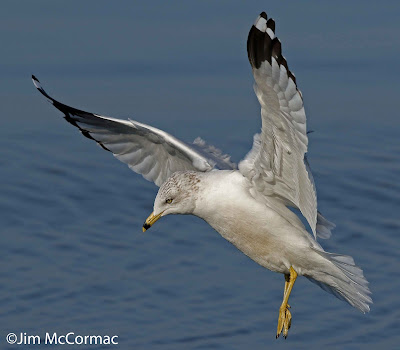 An adult Ring-billed Gull drops to the water.

Much of one's success with shooting flying birds, gulls or otherwise, depends on how the camera is set up, and the type of lens that is used. A fast shutter speed is essential, obviously. I shot this image and those that follow at 1/2000 of a second, give or take. 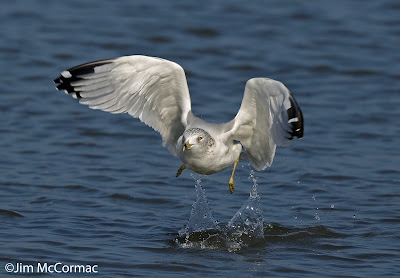 A Ring-billed Gull jumps from the water, creating mini waterspouts. The Ring-bill is by far the most common gull in Ohio, in most places at most seasons. As winter sets in on Lake Erie, their numbers will often be matched or bested by Herring Gulls. But on this day, the Ring-billed Gulls were the dominant gull. I've got scads of images of them, but the lighting and overall setup in this spot was too good to pass up. 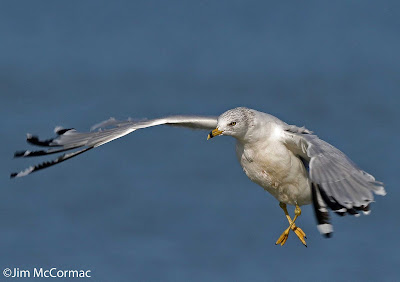 One interesting gull habit that you may have noticed is their tendency to execute a brief rather violent shimmy soon after take off from water. This hard shake blasts the water from the plumage, and in the process the gull's contortions take on some interesting appearances. I spent quite a bit of time and effort trying to freeze the birds in mid shimmy-shake. It isn't as easy as it might seem. In spite of having a pretty good idea that a recently launched bird might do this, it's still a bit tough to track it smoothly with the camera, and freeze the action. This Ring-billed Gull is in the midst of some interesting water-shedding gyrations. 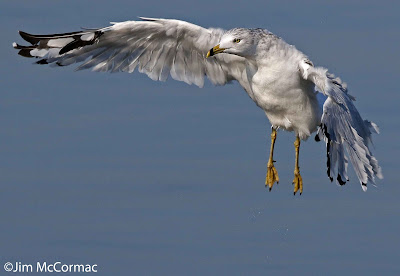 This image was made at 1/2500, and it still didn't totally freeze the violent wing thrusts of this Ring-billed Gull as it shook fiercely in midair. Notice the turbulence buffeting its primary (outermost) flight feathers. 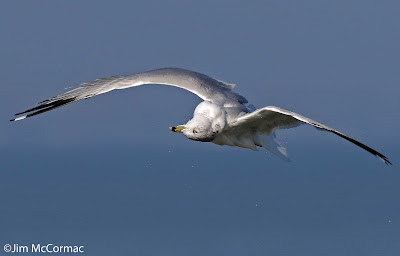 This is what I was really trying for, and the vast majority of my efforts failed. This one, though, is a keeper. When the gulls do their shimmy shake, they often briefly invert their head and it looks like they are flying upside down. This whole shake and shudder stunt lasts only a second or two, and the bird will only be in this head down position for a fraction of a second.

Watching birds' behavior, even very common species, can sometimes reveal interesting opportunities to make out of the ordinary photographs.
at November 12, 2015

We, being on the seaside and having two huge waste disposal sites inland, get a lot of gulls, especially in the winter. I've seen that shimmy shake and now you've shown how the bottom half of it looks before all the water flies everywhere. Thank you!