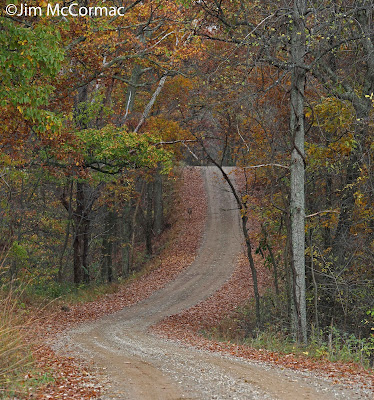 A gravel forest road winds through Shawnee State Forest in southern Ohio, as seen last Sunday. I spent the entire day down there stalking game with my camera. Fall's color had largely passed, and leaves were snowing to the ground. Temperatures were perfect for this time of year - about 60 F.

As always is the case when I am free to hunt down here unfettered, lots of interesting game was located. I returned with many "keeper" images of a wide diversity of subjects, both floral and faunal. The day started with a pretty cool bang, although I couldn't get documentary images of the incident. I located a sizeable mixed foraging flock of birds - chickadees, titmice, White-breasted Nuthatches, Yellow-rumped Warblers, both kinglets, and others - and was hanging discreetly on their periphery waiting for photo ops. Suddenly, I heard a loud ruffle of wings close behind, and whirled around to see that a tiny male Sharp-shinned Hawk had barreled into the scene. Its arrival was accompanied by protest scolds, then dead silence. I don't know if the fierce little hawk bagged anything, but man how I wish I could have got an action shot of the accipiter wing-braking and pivoting, eyes wild with bloodlust and talons splayed. 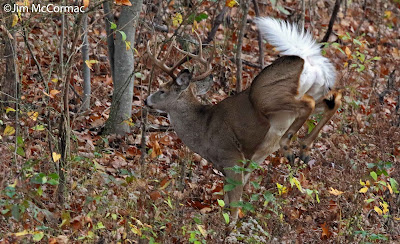 I did manage to catch this gorgeous ten point buck on pixels. It was strolling along a shaded woodland border, and allowed me to approach fairly closely. I was ready for it when it leapt up an embankment, flag tail flaring. 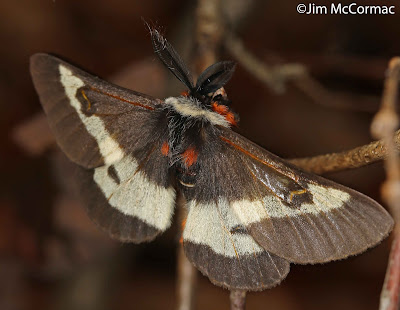 Speaking of bucks, it was a buck of a decidedly non-ungulate kind that was one of my targets this day. This gorgeous lepidopteran is a Buck Moth, Hemileuca maia, and they don't emerge until the Indian Summer days of very late fall. The moth is so named because of its emergence at about the same time buck deer are entering rut. Buck Moths are local in Ohio, mostly in the southern counties, as well as a population in the Oak Openings near Toledo. Shawnee is probably the best place to hunt them. 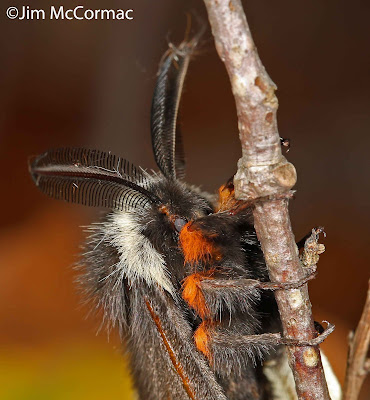 Buck Moths are day-fliers, and look like fluttering little Pandas when in flight. They're fairly large as moths go, and are easy to spot on the wing. Mid to late afternoon seems to bring the peak of activity, and I probably saw three dozen or more this day. The way one typically sees Buck Moths is on the wing - males patrolling in an incessant search for girls.

The challenge is getting close enough for photos. One way to do it as to deftly net one of the moths as it rockets by. But as soon as you bring it out of the net it'll just shoot off if not detained in some way. One way to do that is to chill it briefly in a cooler (which does not have any lasting ill effects), but I've never liked the look of the temporarily refrigerated animal - it looks understandably stiff and wooden. This is not a technique for me; I prefer stalking and shooting creatures on their own terms.

Another way to go about the challenge of photographing Buck Moths requires more patience, and more luck. Just attempt to follow one of the animals as best as possible, and hope it 1) lands to rest, or 2) finds a female. Nearly all of the moths one sees flying about the forest are males, on the prowl for females. 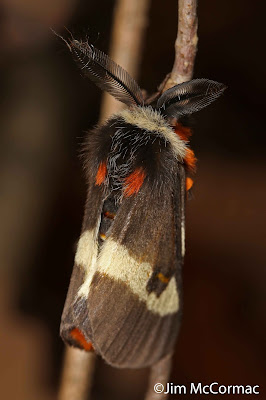 I hit pay dirt this day. A moth blistered by as I walked a ridgetop road, and I lit out in pursuit. It eventually veered into heavy undergrowth and seemed to vanish. As I moved in, I saw why it had disappeared. A female was dangling from a low branch, and her pheromones were pulling in the boys.

Buck Moths are silkworm moths (family Saturniidae) and they don't eat. Members of this group are basically large often colorful and ornately patterned flying gonads. They have no functional mouthparts, and exist only to find a mate, mate with that mate, and in the case of the female, drop eggs. The males' large fernlike antennae are incredible pheromone receptors, and allow them to pick up the females' airborne cues from great distances. 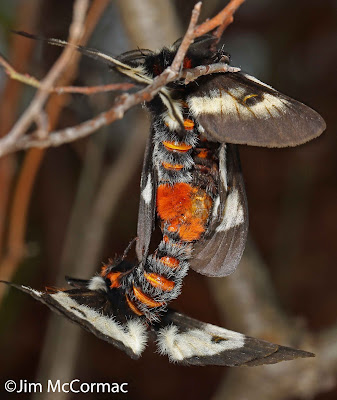 This is the scene that the amorous male moth that I chased led me to. A female Buck Moth, with her larger abdomen, clings to a branch while coupled to a male, who dangles below. Note the gorgeous pattern and bright orange-red coloration of these moths, as well as their dense "fur". Thick hair allows the moths to better retain heat and fly in cool temperatures. I've seen Buck Moths active in temperatures in the low 50's F, and I'm sure they fly in cooler weather than that.

Because these moths were so fixated on the business at hand, they were easy to closely approach. Their location was not easy to access, though, and necessitated pushing through some greenbriar and then laying on the leaf litter to get on their level. But eventually I was able to find a satisfactory position and make some images of the action. 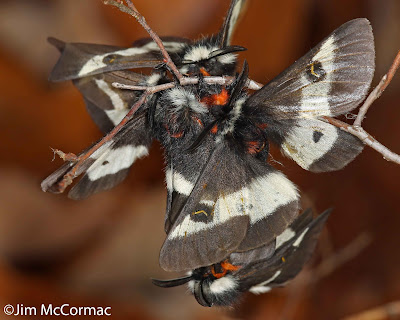 An incredible mating scrum creates a sizeable ball of Buck Moths. A constant procession of males kept bombarding the scene, and many of them would attempt to pile on. There are at least four interlopers swarming the mating couple in this shot. As I lay there watching the scene, moths would bat about my face, and I could even hear the soft whir of their wings as they excitedly fluttered about.

Not a bad experience for the dedicated stalker of Buck Moths.

Fascinating. I have never seen this moth before. It is gorgeous.