Walkingsticks blend so well, they're easy to miss 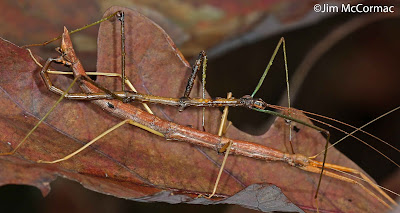 A pair of northern walkingsticks in their mating embrace
Walkingsticks blend so well, they're easy to miss
COLUMBUS DISPATCH
November 15, 2015
NATURE
Jim McCormac﻿

When it comes to mimicry, few bugs rival walkingsticks. They are twigs come to life, moving with a lackadaisical swaying gait and chewing the leaves around them.

A walkingstick must be seen to be believed. Even the family name, Phasmatodea, points to their nearly magical appearance. It’s derived from the Greek phasma, which means phantom — an allusion to the insects’ incredible similarity to sticks.

Worldwide, there are some 3,000 species of walkingsticks. Peak diversity occurs in tropical regions. The longest known insect belongs to this group, the little-known Chan’s megastick of Borneo. One of six specimens of this near mythic bug is in the London Museum of Natural History. It measures more than 22 inches long.

The common stickbug in Ohio is the Northern walkingstick, Diapheromera femorata. Common as they may be, walkingsticks blend so well with their surroundings that most go unnoticed. Also, they generally are more active at night and tend to stay high in the trees.

I made the accompanying image recently in a large southern Ohio forest. The much smaller male stick is on top, mated to a female. In my experience, walkingsticks descend to lower levels in late fall and are easier to find.

Walkingsticks’ mating embrace can last for days. Their stamina is probably not due to an infusion of self-manufactured super Viagra, but because of the male’s need to protect his genetic stock. If he were to leave the female before egg fertilization, interlopers would likely knock his sperm away and replace it with theirs.

When the reproductive process is complete, the female begins dropping eggs in the leaf litter. The eggs resemble plant seeds to a remarkable degree. In some walkingstick species, ants are duped into absconding with the eggs. They cart them to underground nests, where the ants feast on a tasty appendage attached to the egg, but leave the embryo alone. The eggs are thus safely guarded, and the hatchling stick resembles an ant. It eventually makes its way from the nest and into the trees.

Newly emerged walkingsticks resemble tiny versions of the adults. The Northern walkingstick goes through about five molts, growing with each shed of its exoskeleton. A fully grown female can stretch to 4 inches.

Northern walkingsticks are eating machines, consuming prodigious amounts of leaf tissue. In a large forest, there are so many leaf-eating sticks that they become an integral part of the forest ecology. Their collective droppings enrich the complex humus of the forest floor.

Naturalist Jim McCormac writes a column for The Dispatch on the first, third and fifth Sundays of the month. He also writes about nature at www.jim
mccormac.blogspot.com.
at November 16, 2015

Great post---a most fascinating "critter" indeed.
I've only seen them a few times---and oddly enough, they were in strange places like my kitchen window and a screen porch door. I mistakenly thought they ate insects. Perhaps they were in search of companionship-LOL!