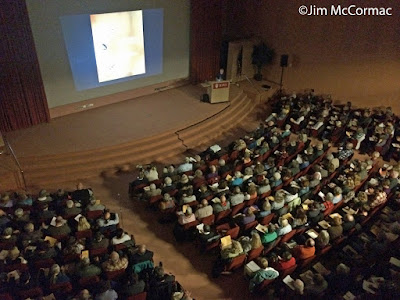 I made a whirlwind trip to the state next door last weekend, Indiana. The Indiana Native Plant and Wildflower Society was holding its annual meeting, which is a big affair. In this photo, which I made with my iPhone from the balcony of the conference room at Indiana University - Purdue University Indianapolis, Doug Tallamy orates to the group. It was a packed house - about 350 attendees. They take their flora seriously in the Hoosier State. I was flattered to be asked back (3rd or 4th time!) to speak, especially given the otherwise star-studded lineup: Doug, Rick Darke, Mike Homoya, and Kevin Tungesvick. It was a great time, and fun to catch up with lots of people and hear some great talks. Kudos to all of the conference organizers and volunteers for the usual bang-up job.

Mid-November in Indiana means crane time, though, as in Sandhill Cranes. And the Mecca for Hoosier State cranes is Jasper-Pulaski Fish & Wildlife Area, which is in only two hours or so northwest of the conference venue. Even though I've made the Jasper crane scene a number of times, at the last moment I decided to stay over there and arrive at the big crane field the following morning before daybreak. This decision was partly based on the weather - it was to be a bright clear day, and every other time I've been, the skies have been leaden-gray. Blue ether would make a better backdrop for photography, of course. 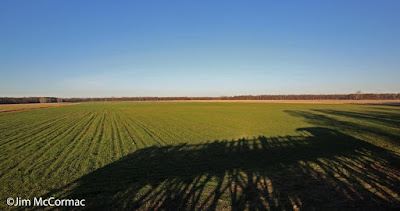 The observation tower casts a long shadow over Goose Pasture as the sun pops over the horizon. This mammoth field serves as the gathering ground for myriad cranes before they begin their day, and again in the evening before they fly off to the marshes to roost for the night.

I prefer being here as the sun rises, for a few reasons. One, the light is to your back. Two, there are generally way fewer people than in the evening. Sometimes the viewing platform is overly packed for the dusk show, but even on this beautiful Sunday morning, just after sunrise, there was plenty of room for everyone and our tripods. 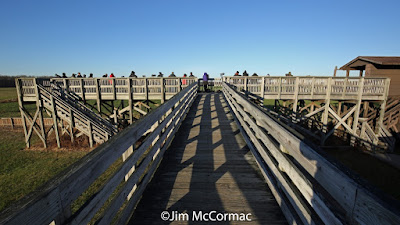 Assembled crane enthusiasts admire assembled cranes in the field beyond. I was told that estimates put the number of cranes at about 8,000 birds, but it didn't seem like that many to me. Nonetheless, there was certainly no shortage of the spectacular animals. 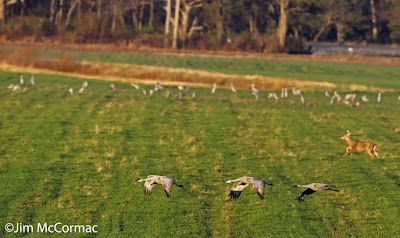 This scene is kind of Disneyesque and I couldn't resist making the shot. A trip of Sandhill Cranes wings by while a White-tailed Deer gallops along, and a loose assemblage of more cranes loiters in the backdrop. Such is Jasper in November. 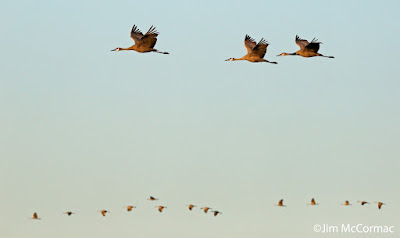 While there are places where far more cranes gather than here, J-P is still an amazing experience. People come from near and far to drink in the sight of these fabulous giants flying about, wings spanning well over six feet. Cranes are vociferous, and the air resounds with their primitive guttural rattles. 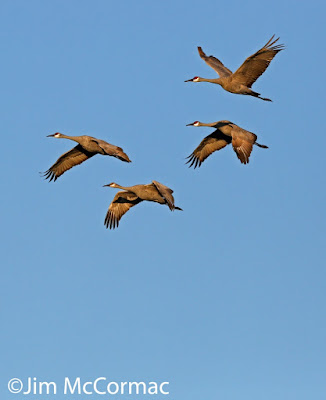 As the sun cleared the horizon, its rays began to cause flying cranes to glow with beautiful golden tones, and the click of cameras accelerated. I met some new friends on the platform, and we had a great time shooting birds, talking photography, and alerting each other to incoming opportunities. Mike Bader was one of them, and some of his stunning work can be seen RIGHT HERE. In general, bird photography is a solo pursuit, but in this case it doesn't matter. The cranes are probably going to act the same whether there was just one person hiding under the platform, or 75 people gabbing away on the deck. 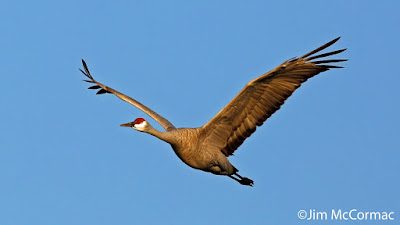 A gorgeous red-capped adult crane wings right over the platform. I shudder to think how many images were clicked off of this bird. It sounded like mini machine guns going off. I shot this one with my Canon 7D Mark II which fires ten frames (rounds) a second, and there was plenty of similar hardware aimed at the bird. There must be millions of (camera) shots fired at cranes at J-P during the peak fall migration. 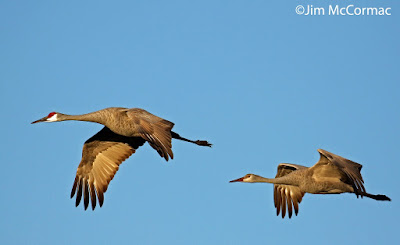 Sandhill Cranes remain together as family units throughout winter and well into spring. Many of the groups have at least one juvenile in tow. Here, a youngster trails an adult. The juveniles give a distinctive high-pitched whistle in flight, sometimes drowned out by the adults' raucous rattles.

Jasper-Pulaski should be prime for cranes into mid-December, so if you're looking for an interesting avian experience, check it out.
at November 19, 2015