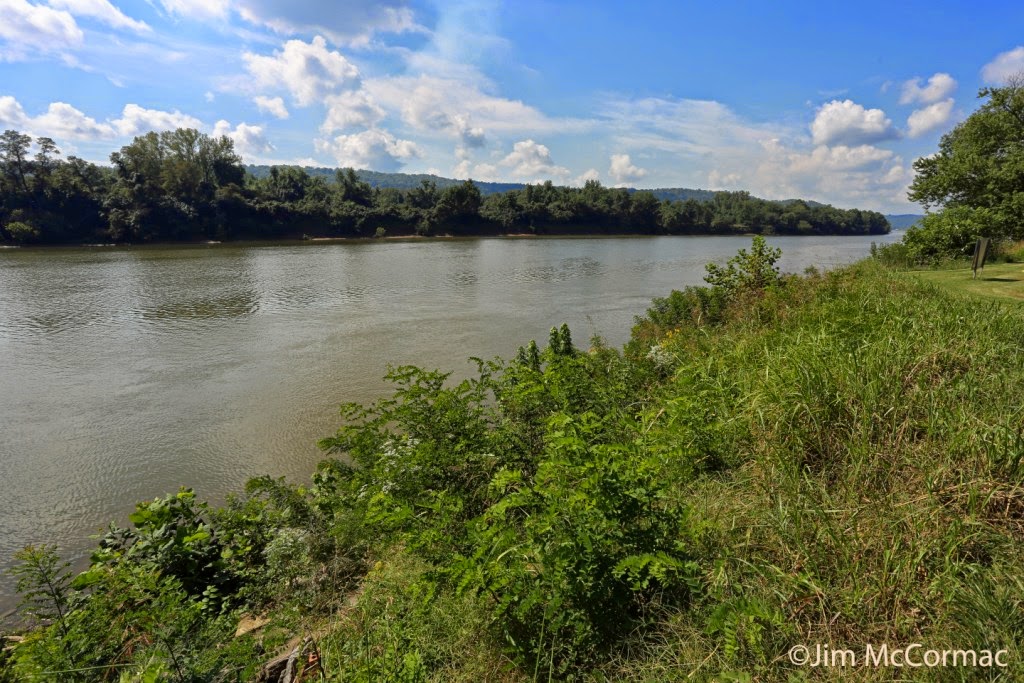 A "weedy" unkempt bank of the mighty Ohio River, in Adams County, Ohio. That's Kentucky on the far side. I was down in the hill country for the past four days, much of which was spent attending a fabulous workshop on the singing insects (Orthoptera), taught by Wil Hershberger and Lisa Rainsong. More on that later.

We had some time on either end of the workshop to do some exploring, and we didn't let any grass grow under our feet. Some amazing finds were made, including the animal featured in this post. John Howard and I were riding together, and when we pulled into this site and saw the habitat, one animal was on our minds: the world's greatest beetle, the amazing Amorpha Borer! 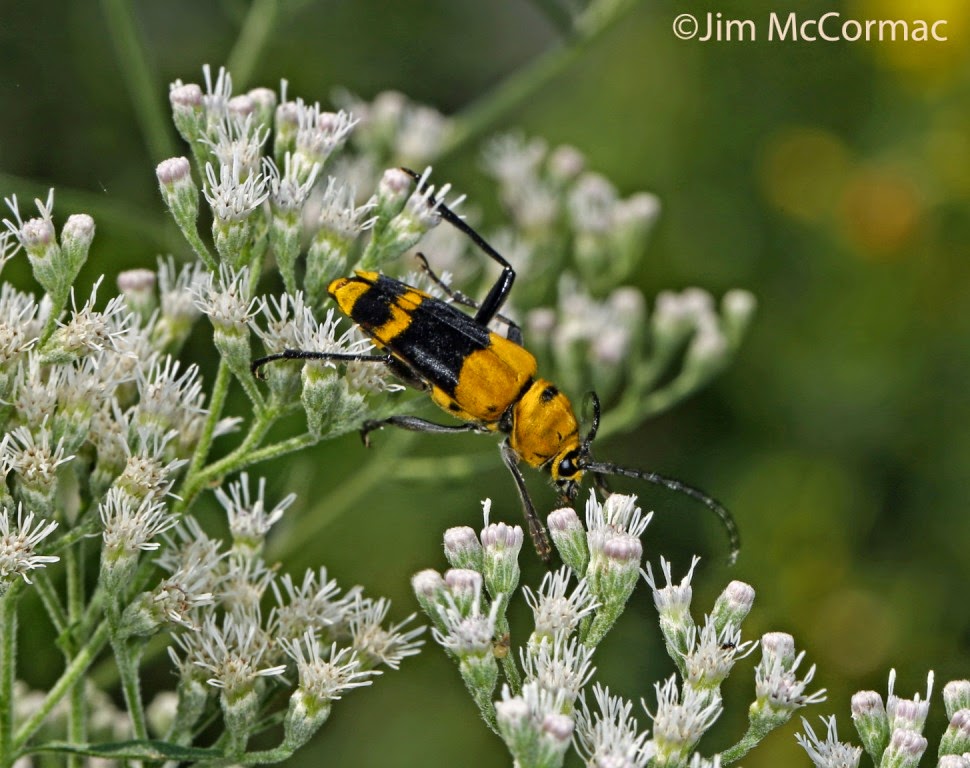 Our party fanned out onto the riverbank and began the hunt, and it wasn't long before a mighty shout went up from Laura Hughes - she had spotted an Amorpha Borer, Megacyllene decora! We rushed to the spot, and marveled over the tangerine and black beast as it ran roughshod over the flowers of Late-flowering Thoroughwort, Eupatorium serotinum. Soon Laura saw another, and before we left a third beetle had been tallied. That was a record for us. John and I, especially, have searched for these beetles for at least six or seven years, and the best we had ever done was two in a day. After stopping at another site in Scioto County, where we added two additional beetles, our day's total came to an incredible five (5) Amorpha Borers. 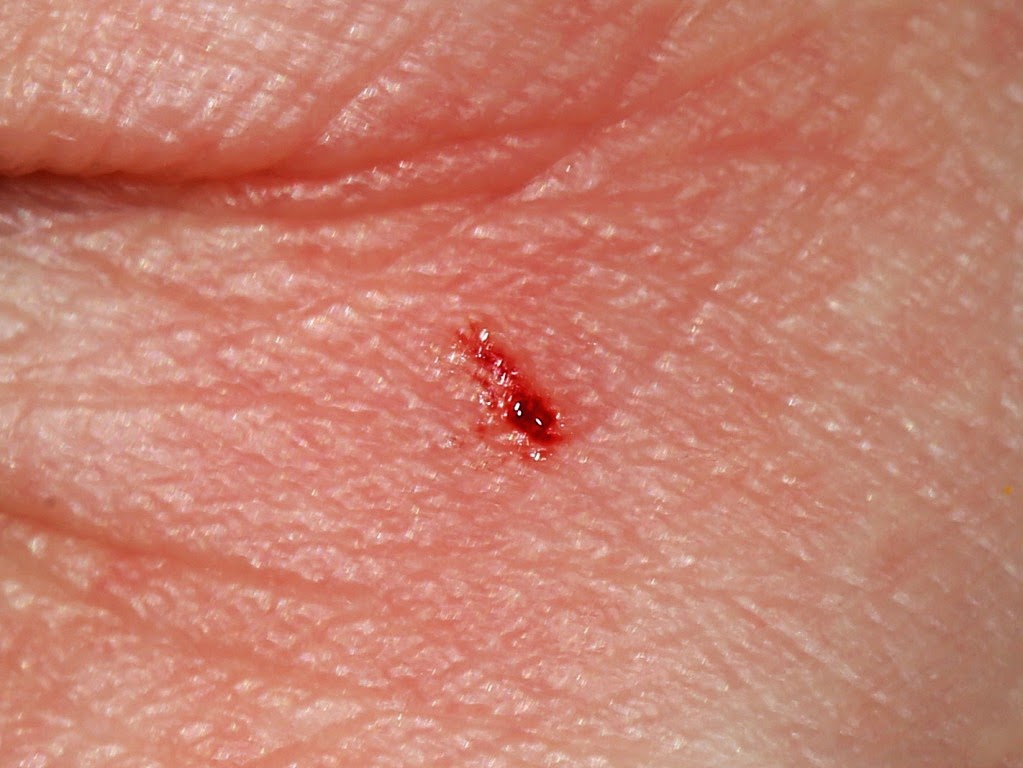 Laura quickly learned that these large brutish beetles are not to be trifled with. She deftly snagged one with her bare hands, and received a blood-inducing nip in the process. 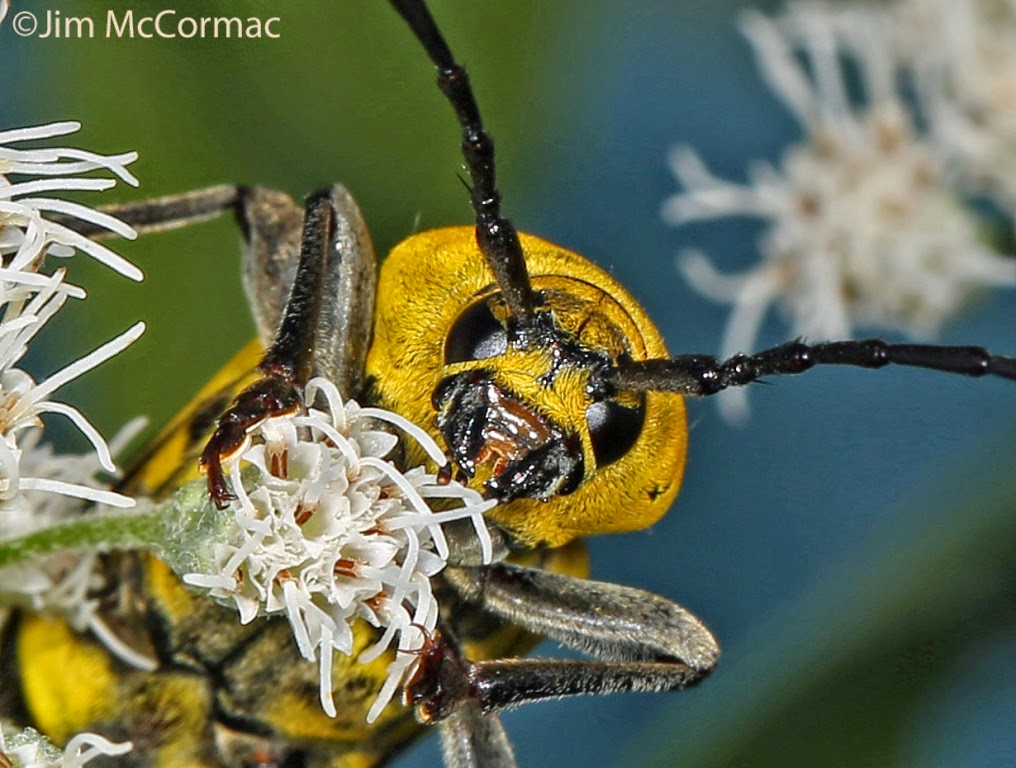 The jaws of the Amorpha Borer are large and powerful, as is the case with many longhorned beetles. 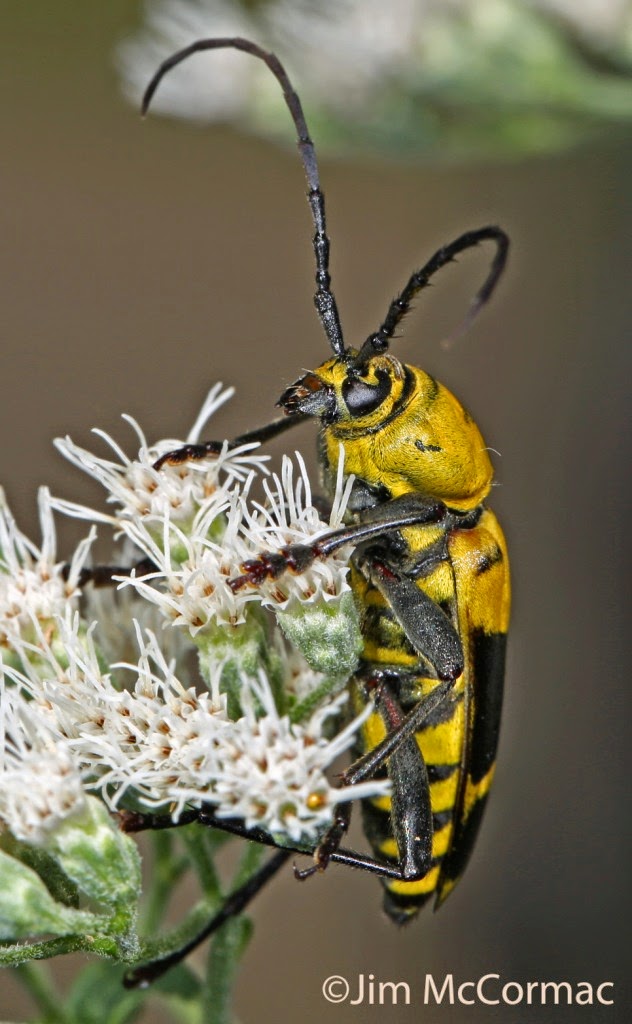 The Amorpha Borer is a striking insect, and appears to be a hornet mimic. Note the bold black and yellow banding. In flight, especially, they really do look like a yellowjacket or some such stinging insect.

From our experience, and we have spent a fair bit of time seeking this beetle, the Amorpha Borer is rare and local. It does not seem to range away from the banks of the Ohio River (in Ohio), and its flight period seems to be from August into September. We have never found them far from their host plant, which is False Indigo, Amorpha fruticosa. The beetle larvae feed internally on the stems of these plants. When the adults do emerge, they seek nectar avidly, but always (?) in close proximity to the host plants. A decided favorite is the aforementioned Late-flowering Thoroughwort, but we have also found beetles on goldenrods.

So those are the ingredients for finding Amorpha Borers in Ohio: an overgrown bank of the Ohio River, plenty of False Indigo, and blooming thoroughworts and goldenrods. 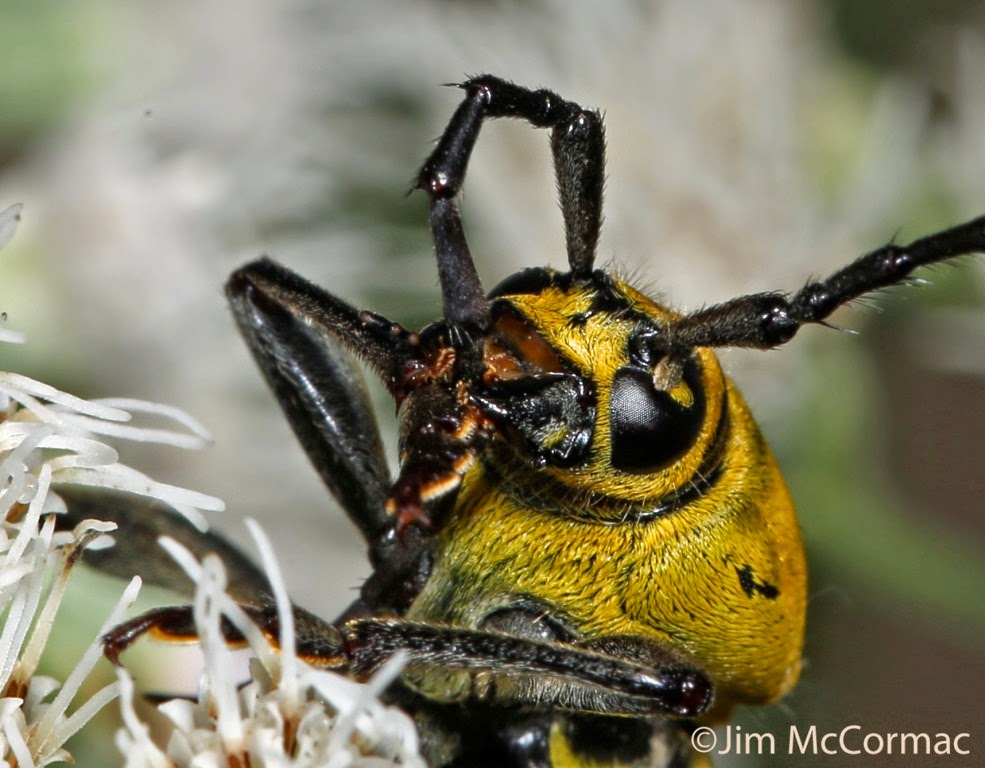 As befits their good looks, the beetles are always meticulously groomed.This one is running one of its antennae through its mouthparts, to keep everything clean and in good working order. 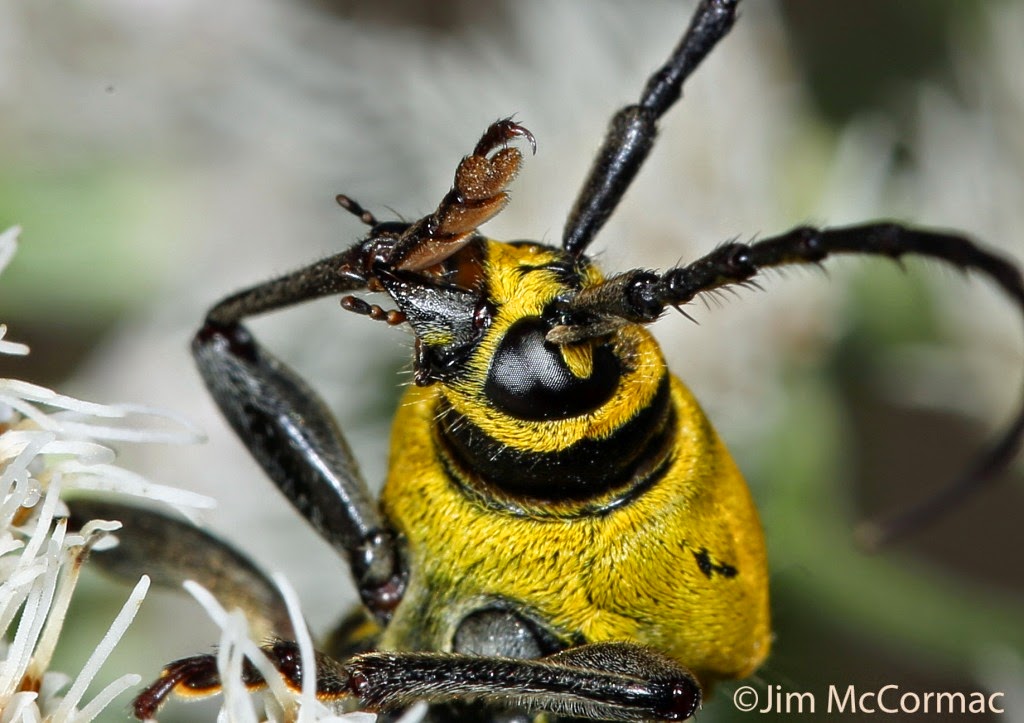 Once the beetle had completed the task of antenna-scrubbing, it set about washing its feet. One never knows when the paparazzi might arrive on the scene, I suppose. 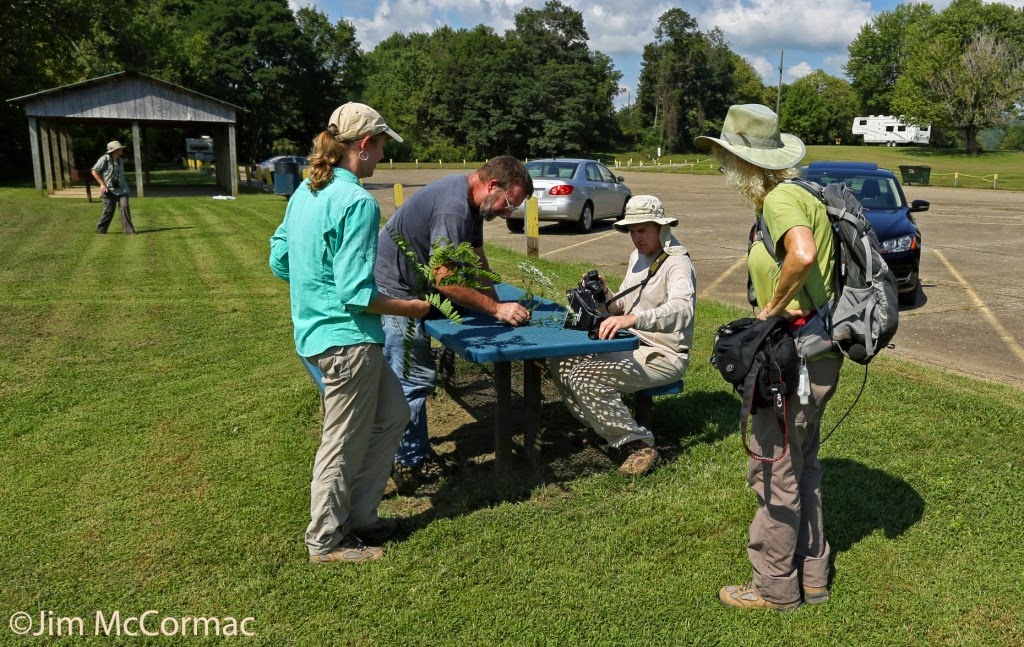 In order to better capture the beetle's true magnificence, we temporarily detained one and shot images on foliage affixed to that picnic table. John Howard (left) assists David Hughes (seated), while Laura Hughes (left) and Lisa Rainsong look on. Wendy Partridge is in the backdrop, and Wil Hershberger was off looking at something elsewhere.

Based on our searches, John and I believe that Megacyllene decora is probably an uncommon and local, if not downright rare, beetle in Ohio. We would love to learn of other populations, but so far no one has alerted us to any. A check of the massive Ohio State University insect collection (courtesy of George Keeney) revealed no specimens, either. Such a large flashy beetle would surely draw the attention of collectors, and if they were at all plentiful, I suspect specimens would reside in OSU's collection.

Perhaps the Amorpha Borer deserves to be state-listed as threatened or endangered.

how big is that beetle? tough to gauge the dimensions from the pics...