Major kudos to Steve Landes! He found an incredibly rare bird (for Ohio) last Wednesday, and performed in a highly efficient manner in regards to getting word out. Within a half hour or so, just about everyone in Ohio's birding community knew about the Reddish Egret that Steve had found. 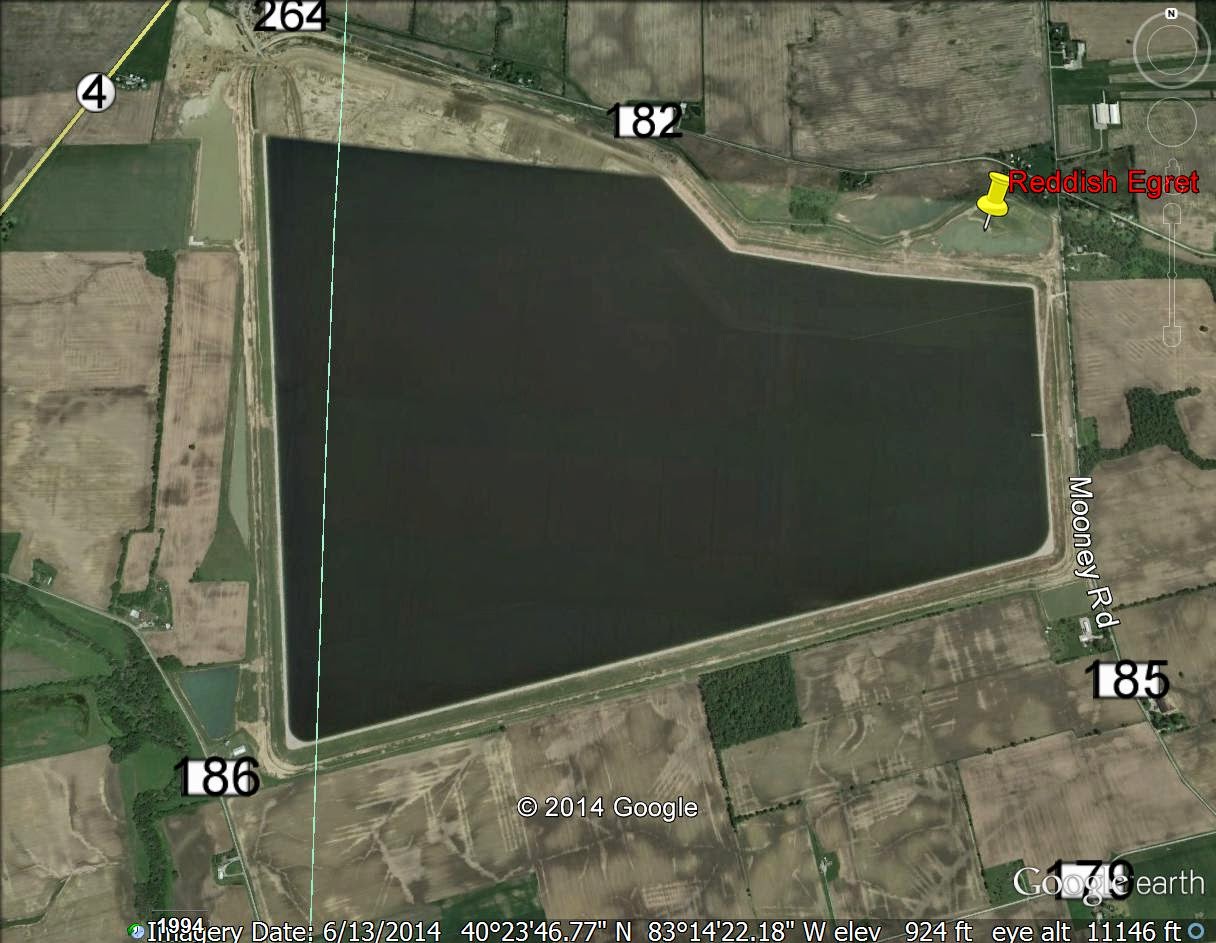 Ground zero for the egret - the City of Columbus' new upground reservoir in northwestern Delaware County, about 40 minutes northwest of Columbus. The egret has been frequenting shallow ponds on the reservoir's north side - I marked the spot where I saw it late Wednesday afternoon. I don't think the presence of the massive reservoir is coincidental. The bird, as it winged over, likely was attracted to the large water feature, and then dropped in to hunt in the adjacent shallow wetlands. 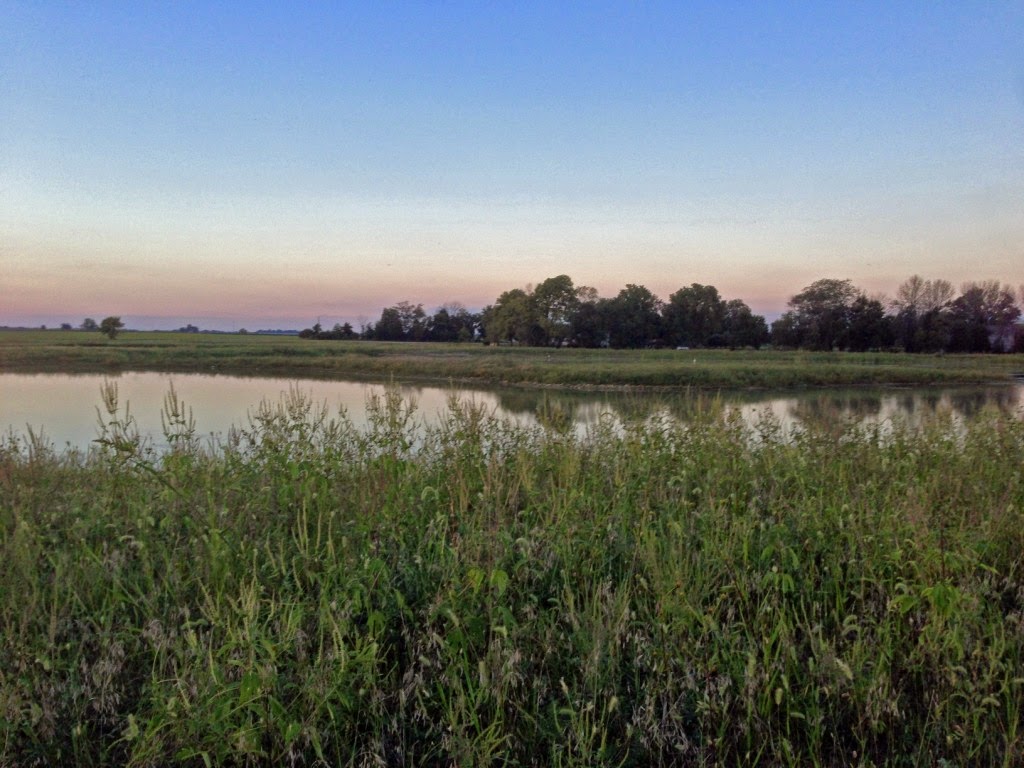 I heard the initial report while in my office and unable to escape. Immediately after work, I rushed home, grabbed some gear, and headed up to the egret. As fortune would have it, Steve Landes was there. In my lust to see the Reddish Egret, I ran afield with only the big lens bolted to the Canon, so Steve was kind enough to share this iPhone picture of the general habitat. Nothing unusual, but the waters hosted plenty of fish and other aquatic prey. 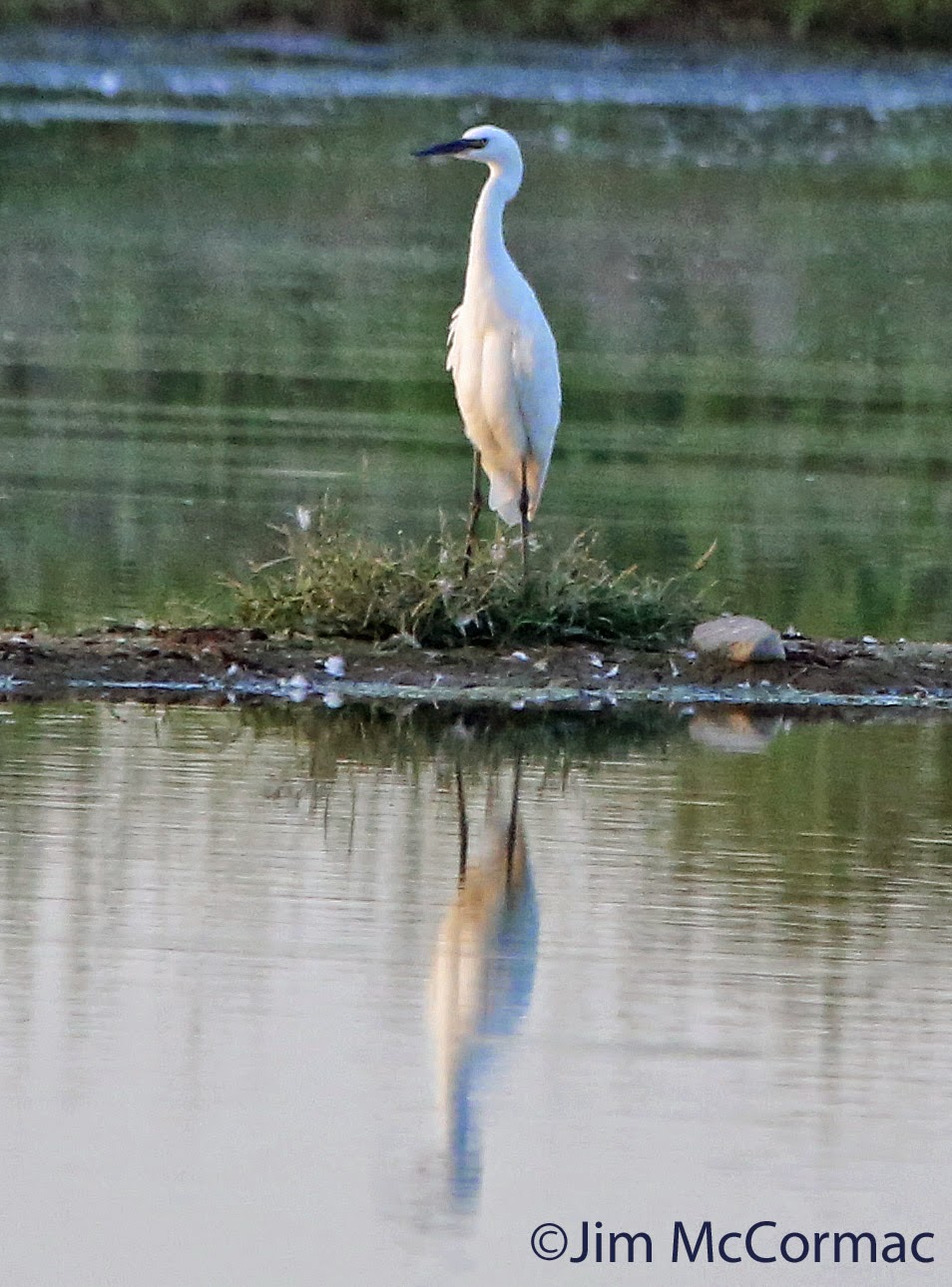 The Reddish Egret, in a rare moment of repose. Steve's bird is a white morph, and a subadult. Apparently, at least in U.S. populations, white morphs comprise less than ten percent of the population. More typical dark morphs are slaty blue-gray with reddish-maroon neck and head. Of course, this bird may have come from points south of the U.S. There are thought to be less than 2,000 pairs in the United States, mostly along the Gulf Coast of Texas. But the species ranges south through Mexico, Central America, and the Caribbean. Like many other species of southern herons, Reddish Egrets can engage in northward post-breeding dispersal. Nonetheless, they seldom stray from coastal saltwater habitats, so to have one in Ohio is remarkable. 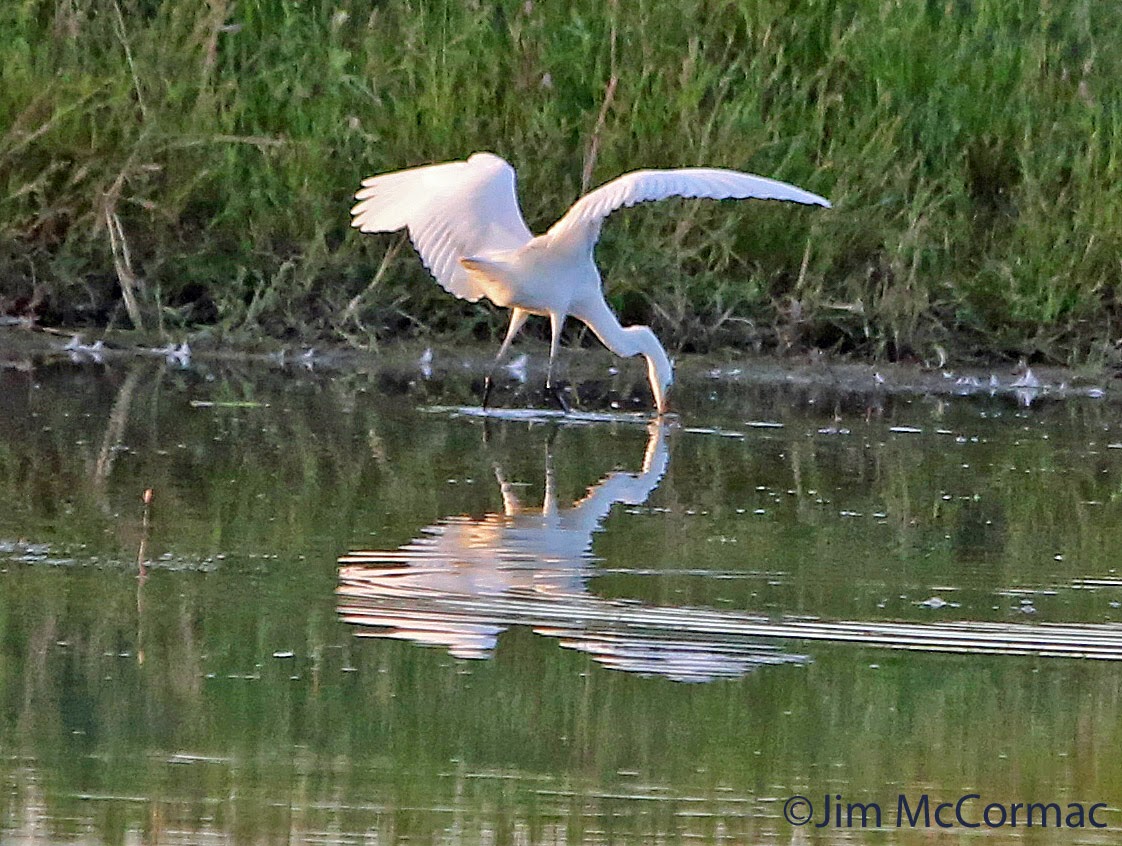 This was a brilliant find. It would have been quite easy to dismiss the bird, especially from a distance, as a juvenile Little Blue Heron, or perhaps a Snowy Egret, without taking a good look. No one would probably be thinking about Reddish Egret. But Steve did stop for a close study, and nailed it.

One clue for Reddish Egret is its feeding tactics. The animals often rush manically through the shallows, chasing and lunging after prey. Mantling the water with outstretched wings is a common practice - the sudden appearance of shade probably serves to spook fish, which the heron then darts after. 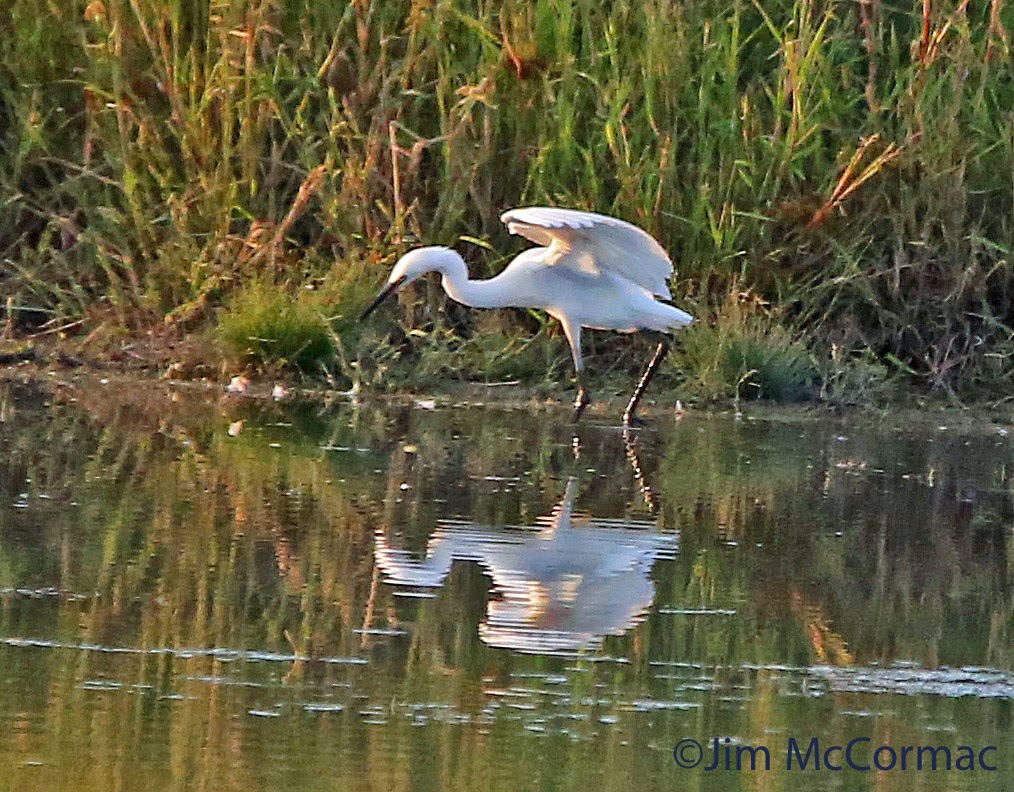 I apologize for the less than stellar images, but these were shot from afar in fading light. I know others have much better images, and if someone sends me one, I'll post it. But at least we now have images of this species in Ohio. There was a previous report, but that bird was never photographed and was a single observer sighting. I don't doubt it, but such reports should ordinarily fall into the hypothetical category. I'd say that even if it was my own sighting. First state records should require indisputable evidence. But evidence abounds in this case.


A short video that shows the frenetic feeding behavior of the Reddish Egret. 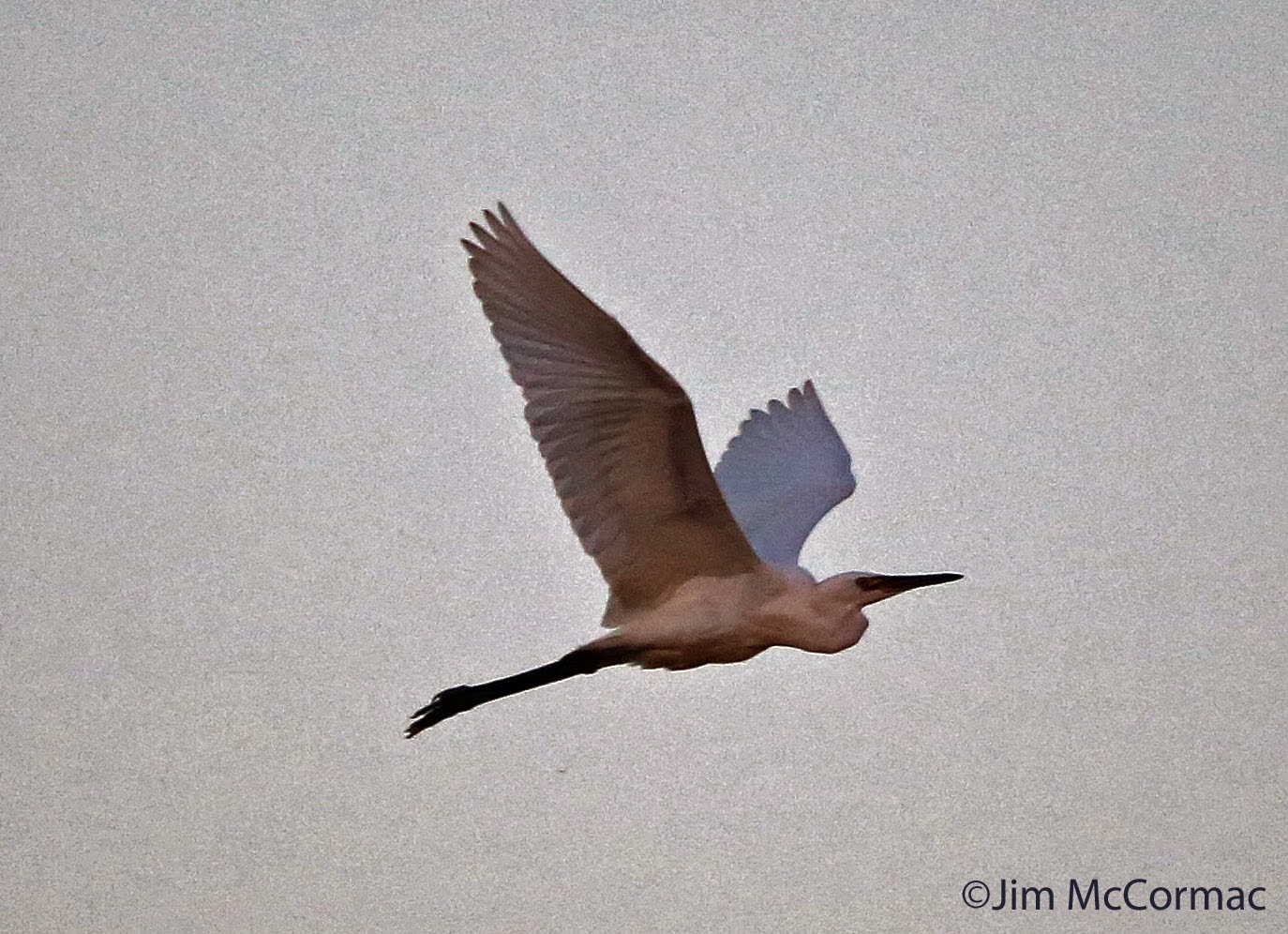 As darkness settled in, the egret arose and flew south over the reservoir. It returned the following day (Thursday) and has now been seen by scores of birders. I write this early on Friday morning, and have not yet heard of a report from today.

Congratulations and thanks to Steve Landes for the avian find of 2014. For the record, this is species #372 for my Ohio list. New state birds are few and far between these days. Ironically, my biggest Ohio nemesis species is the Tricolored Heron. We get a few of those every year. I'd not have thought that I would add Reddish Egret before that one.

We live in the yellow house across from the water and saw the Reddish Egret this morning about 7am and just now at 7:30 pm.