My expeditions afield tend to produce far more images than I could ever share here. Normally, I have a specific subject or theme for posts, and that sometimes precludes using photos that I think are interesting, but fall outside of one of my writing topics.

So here is a hodgepodge of various insect images, all taken in the last week or so. All of the subjects were found in central or southern Ohio. 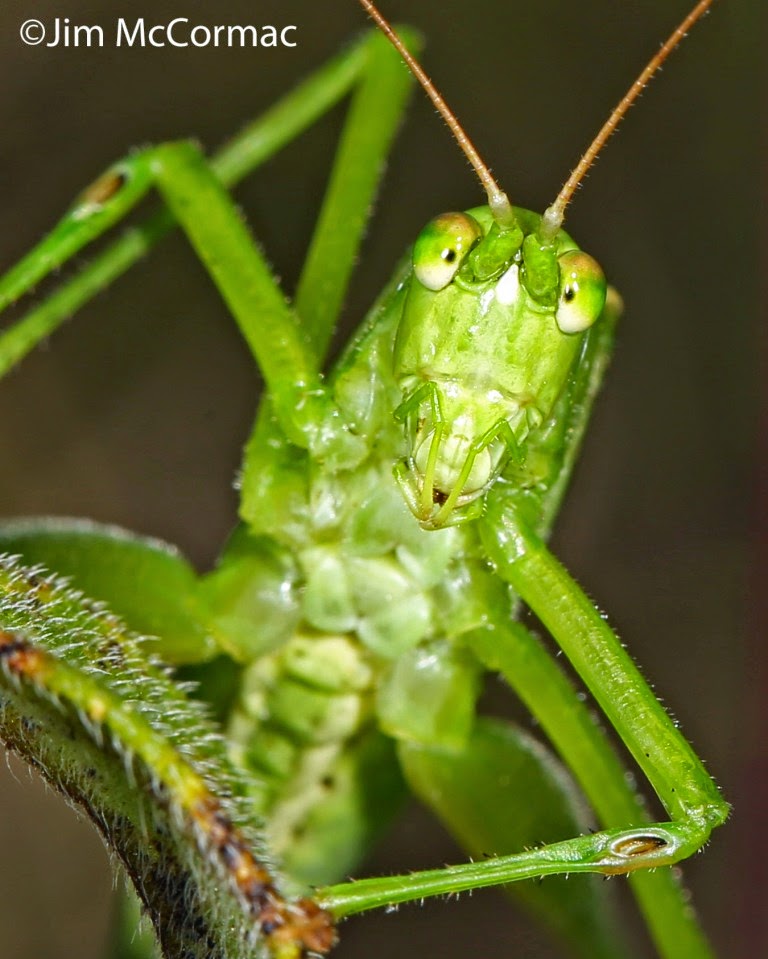 A Curve-tailed Bush Katydid, Scudderia curvicauda, looks into the camera. These whimsical-looking beasts make for great photography subjects. Note the katydid's ears - those dark oval pits just below the knees on the forelegs.

TIP: Go out at night, when they are active and singing, for the best images. 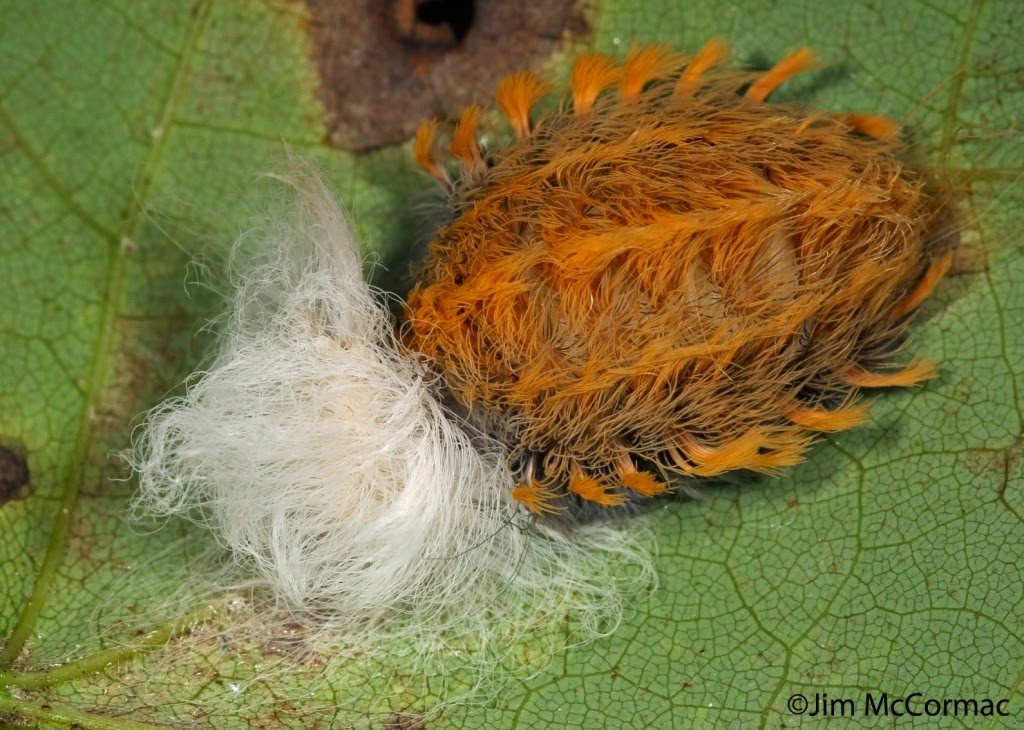 A Black-waved Flannel Moth caterpillar, Lagoa crispata, caught in the act of molting. It has nearly shed the skin of the penultimate instar, which is the white fluffy cottonlike mass. The caterpillar is now brown and resembles a turtle covered with shag carpeting. Most of our caterpillars go through five growth stages, each termed an instar. In some species, such as this one, the appearance between instars is quite different. This is the last stage - next stop, cocoon. 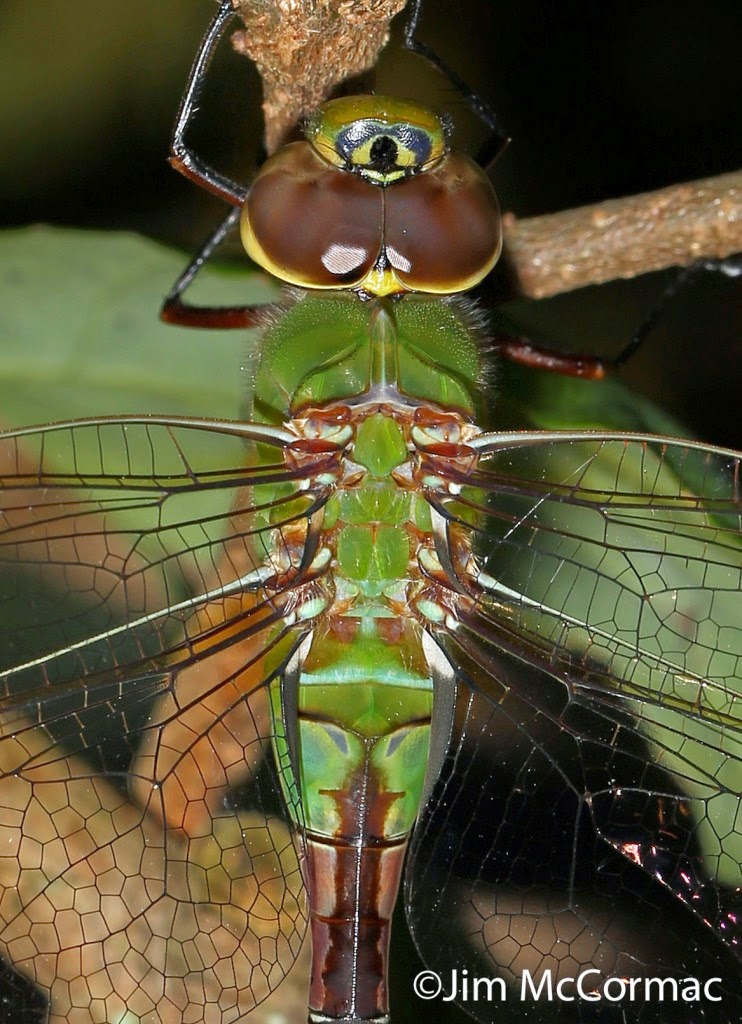 A female Common Green Darner, Anax junius, caught while resting late at night. She was one of several that we found on this evening, dangling from tree branches. Green Darners are highly migratory and it may be that a migratory swarm put down in this area for the night. 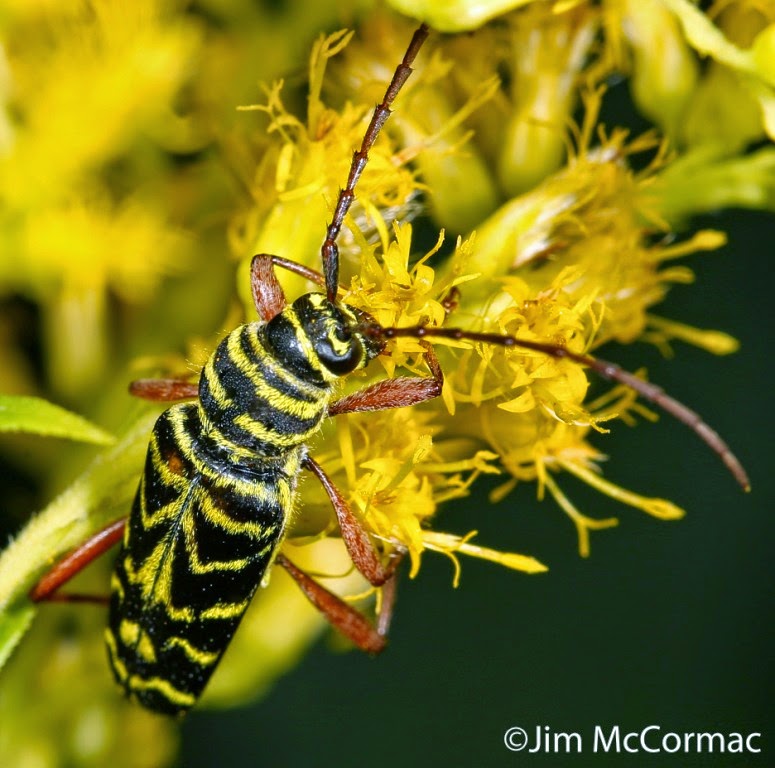 One to watch for on the goldenrods this time of year, the beautiful Locust Borer, Megacyllene robiniae. These longhorned beetles spend much of their life cycle as larvae, feeding internally on the tissues of Black Locust trees. For an all too brief period in fall, adults emerge and can be found taking nectar and pollen from flowers. 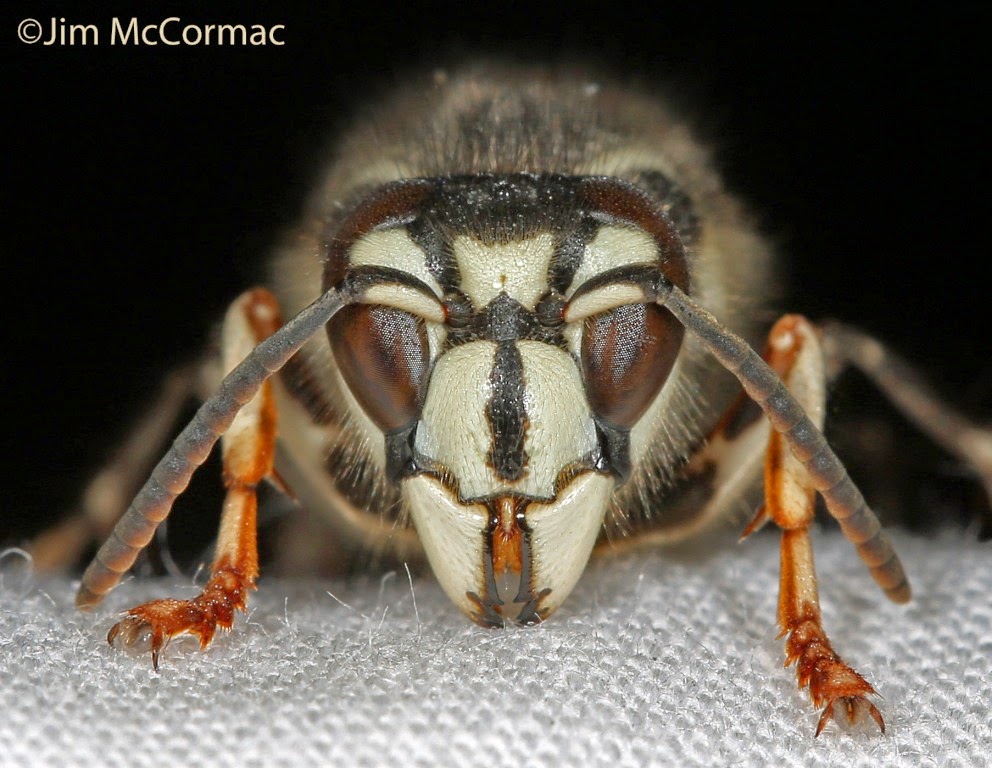 Fortunately for me, it was a chilly night when I shot this insect, which had flown into lights at a moth sheet. It is the Bald-faced Hornet, Dolichovespula maculata, and this individual was too cold to let me have it. Their sting packs a whallop. I know this firsthand, having been stung while photographing one of the football-sized paper nests. Check the mandibles - Bald-faced Hornets capture and eat other insects, sometimes including yellowjackets. 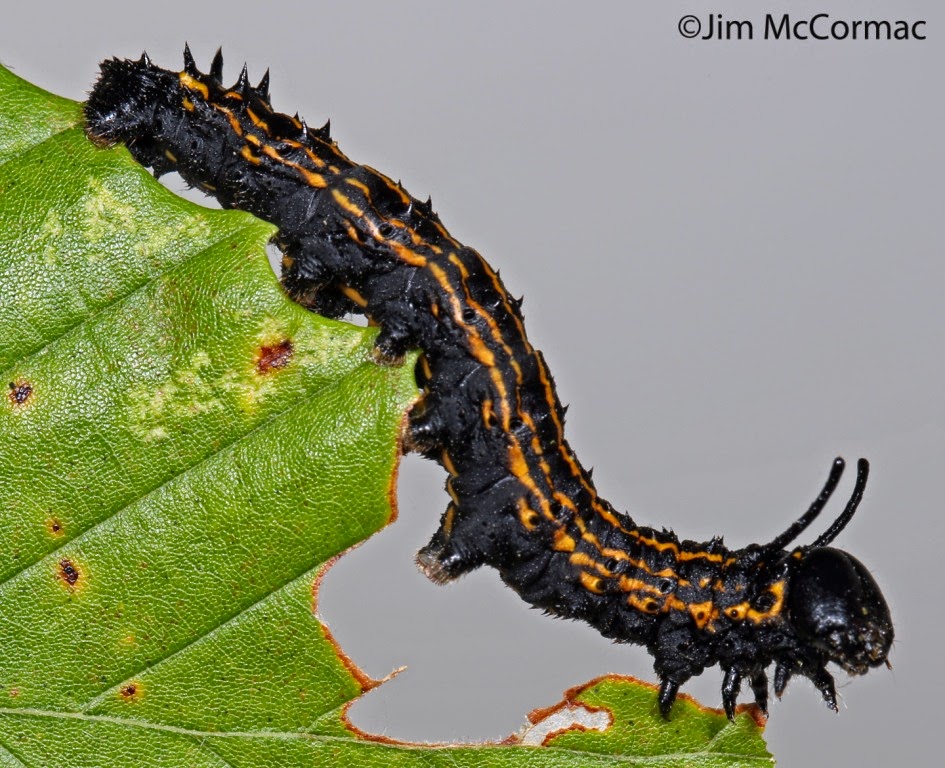 A tubular work of art indeed, an Orange-striped Oakworm, Anisota senatoria, makes mincemeat of an American Beech leaf. Sometimes there are noticeable population spikes in this species, and scores of the caterpillars can be found on a single tree. 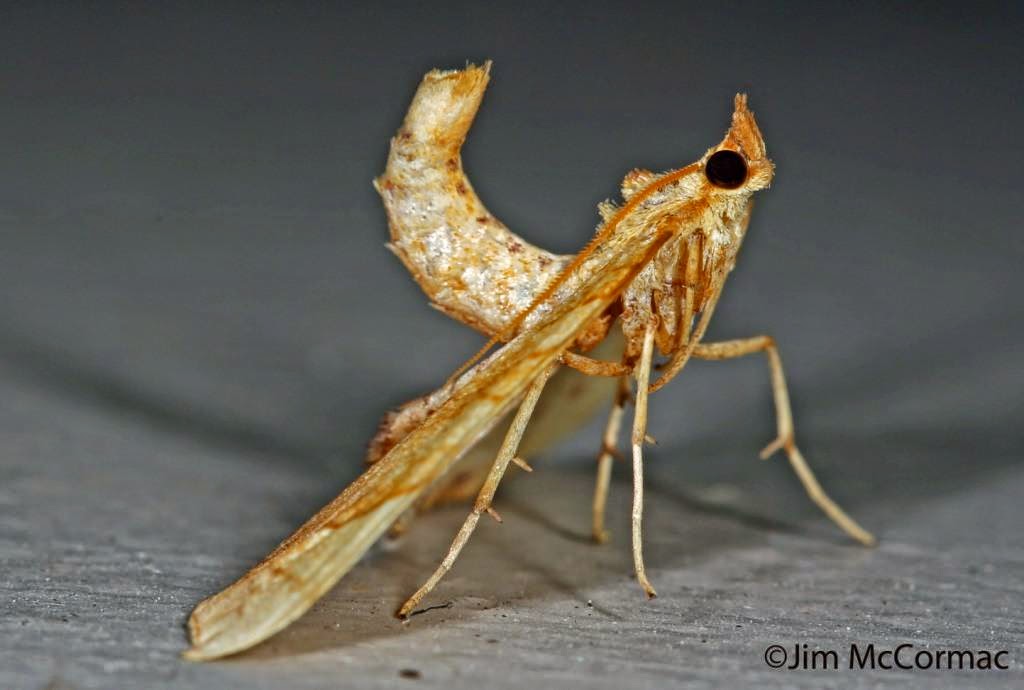 This funny-looking little moth was by my porch light tonight. It's the Lesser Grapevine Looper, Eulithis diversilineata, which can be quite common in urban and suburban locales. It is one of many species of moths whose caterpillars are wedded entirely to wild grape and Virginia Creeper. 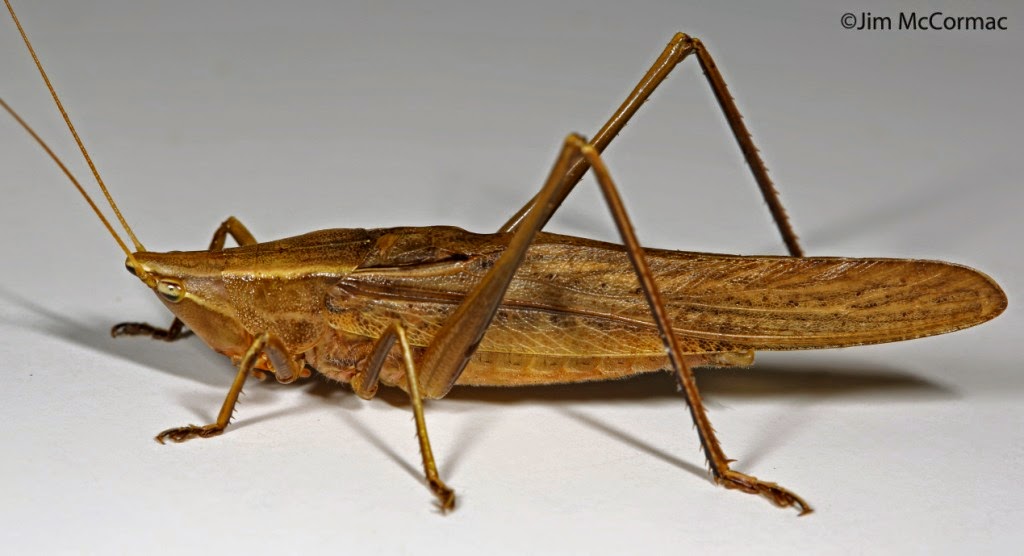 A brown form of the Round-tipped Conehead, Neoconocephalus retusus. These large katydids are normally green, but this form crops up from time to time, and it blends especially well with the senescing foliage of late autumn. Round-tipped Coneheads create a very loud buzzing crackle, which is a common sound along roadsides and in fields. Listen while you can - the singing insects will largely vanish with the first frosts of late fall.

I'm pretty sure if I had a great lens (or even a decent camera!!) I wouldn't get much done at home. Love the "expression" on the katydid's face--a real goofball. I am thoroughly enjoying your photos!

Great shots! I always wondered how one might get great close-ups of cruising dragonflies.

Wonderful shots. And, perfect timing! I saw some Locust Borers in the Cuyahoga Valley National Park (Terra Vista). I didn't know what the crazy zig-zap marked insects were until now.

Love the cross-eyed katydid in the first photo, as well as the scary alien look of the bald-faced hornet! Glad it was a cold night for your sake, too.