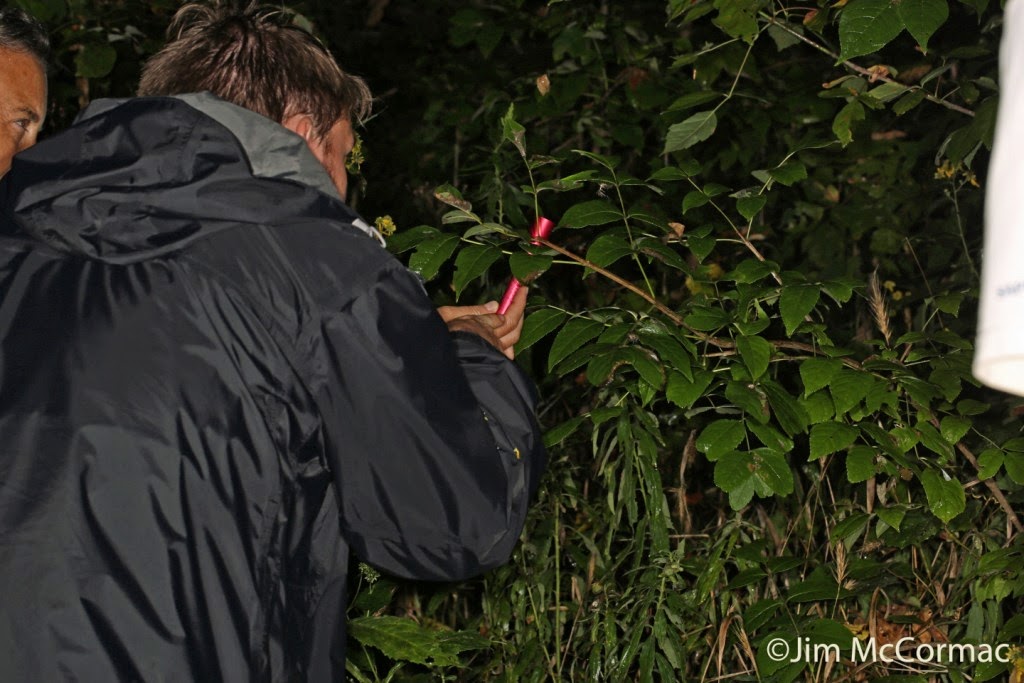 An inquisitive group examines a sapling Blue Ash, Fraxinus quadrangulata, at the Fernald Preserve in Hamilton County, Ohio. A number of us were there to look for moths, singing insects, caterpillars and whatever after dark last Saturday night. We scored big in the caterpillar department.

The aforementioned ash played host to a very special species of caterpillar; one of the Holy Grails among the tubular crowd. In fact, three of the caterpillars were present! It was a species that I had sought - as much as one can knowingly seek such things - since I learned of its existence. As with many finds, there was a significant amount of luck and serendipity involved, but to our credit, we were out after dark and actively seeking caterpillars, so we did work for it. I saw some fresh leaf damage on the ash, went in for a closer look, and Voila! I think you'll see why we thought this find was so cool. Read on... 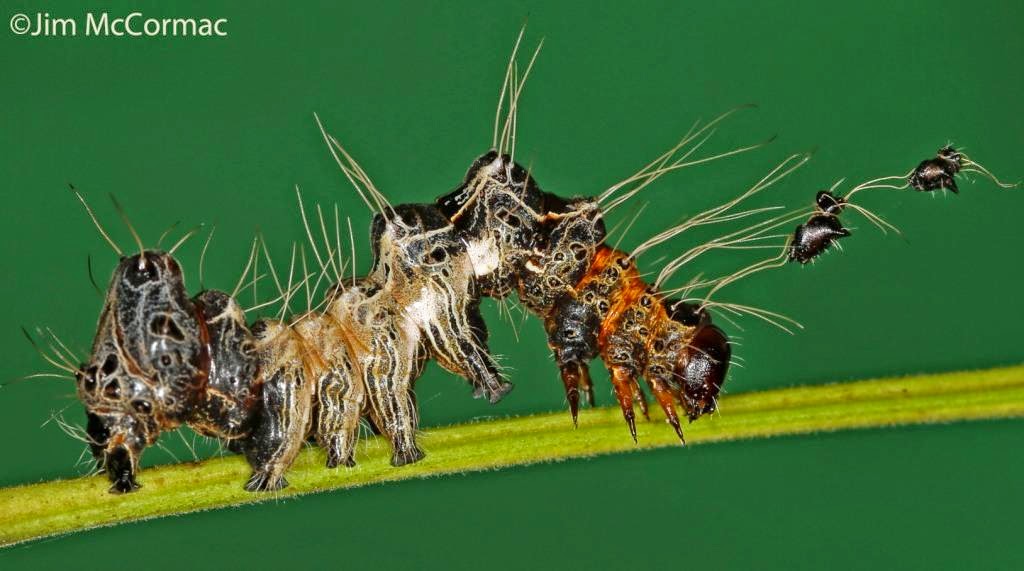 A Harris's Three-spot caterpillar, Harrisimemna trisignata! The caterpillar world is full of weird creatures, but perhaps none are weirder than this one. It resembles a combination of Yak, fresh bird droppings, and some spider eyes stenciled on for good measure. Oh, and those strange bits of debris caught up on the long white hairs on its head. That's not just random bad grooming - the trash is there for a reason, as we shall see. 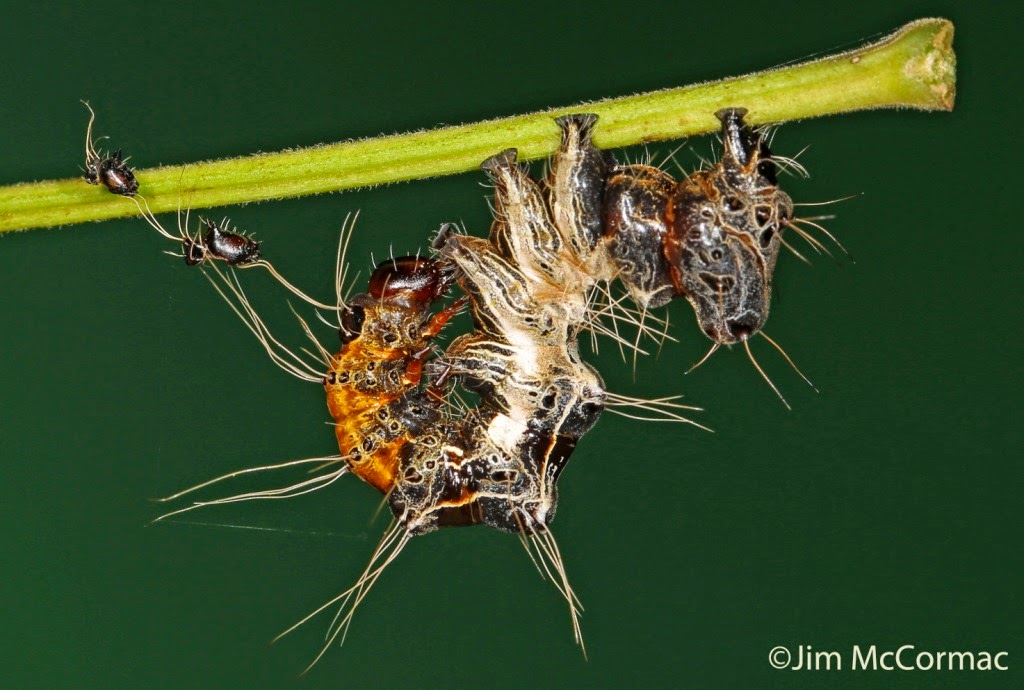 David Wagner, in his excellent guide, the Caterpillars of Eastern North America, states this about his first encounter with a Harris's Three-spot: "When my son Ryan first pointed out a Harris's Three-spot caterpillar to me, I dismissed the animal as a spider, even after he urged a second look."

I can easily see how one might do that, in the field and in the gloom of night. Had I not already been familiar with the animal from studies, and aware of what to look for, I may well have dismissed it as something else as well. 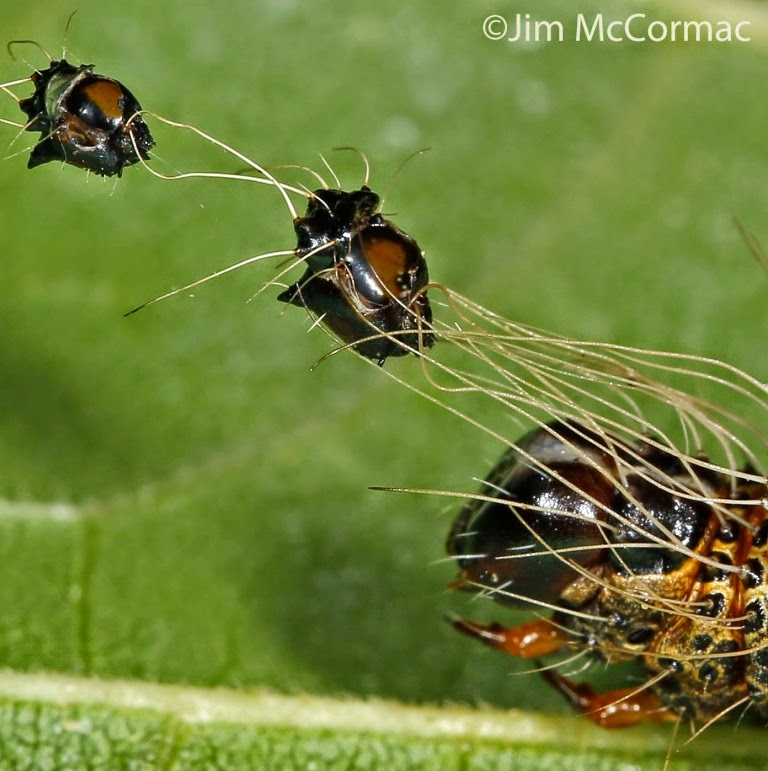 Now, back to the trash bits adorning the caterpillar's hairs. Those are the head capsules that were shucked during previous molts (caterpillars molt and shed their skins multiple times before reaching maturity). Somehow, the hard head capsules adhere tightly to the hairs, and the caterpillar uses them as flails. If a potential enemy such as a parasitoid fly or wasp, or even a small songbird, investigates the caterpillar, it will lash out with the hair-born head capsules. Its strikes occur with incredible rapidity and amazing accuracy, and would surely repel many would-be predators.

To make these photos, we transported the caterpillar into the Fernald Visitor Center (amazing building!) where we could create better images. The caterpillar was later taken back to the same tree upon which we captured it. As we photographed it, a tiny fly or wasp alighted on the leaf stem the caterpillar was on. I'm not sure what it was, but it did seem interested in the caterpillar. As soon as the insect lit nearby, the caterpillar flailed it away. It was a quite remarkable performance and I still am mystified how the cat even knew the other insect was there.

We found that we could easily stimulate the caterpillar to work its flails with a light touch of a finger. This video shows the animal in action. 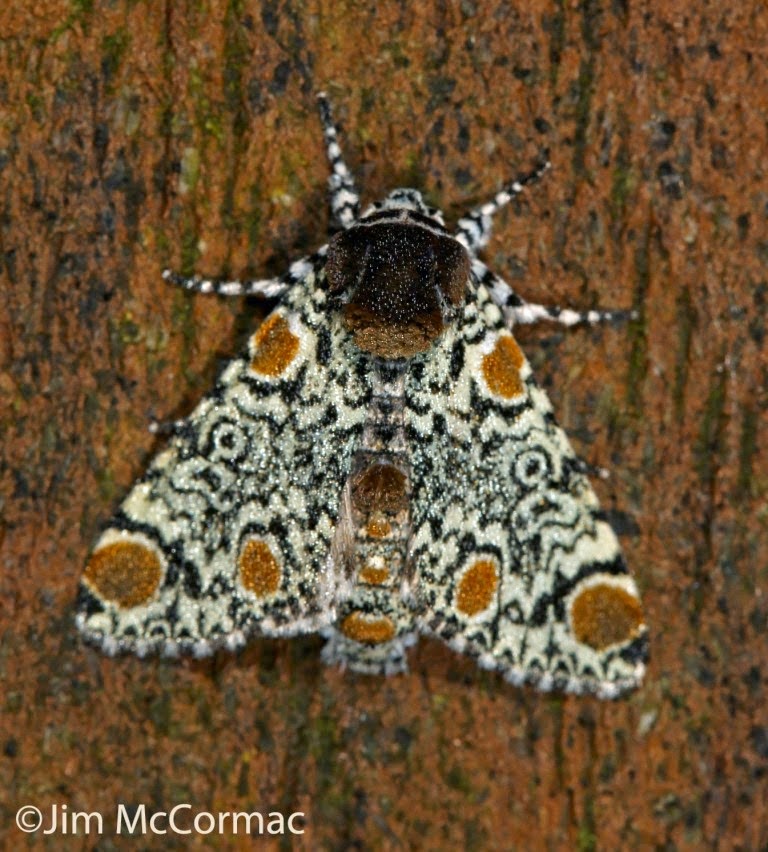 To top it all off, the bizarre caterpillar tunnels into wood and pupates there. If all goes well for the caterpillar, it will morph into an equally amazing moth. An adult Harris's Three-spot is sure to cause a stir when it is found, as it is one of the more beautiful species in our Lepidopteran fauna. As with the caterpillar, I had been on the hunt for one of the moths for many years, and it wasn't until last June that I finally saw one. The moth in the photo was photographed at the massive Edge of Appalachia Preserve in Adams County, a region that probably harbors one of the richest diversity and abundance of moths in eastern North America. 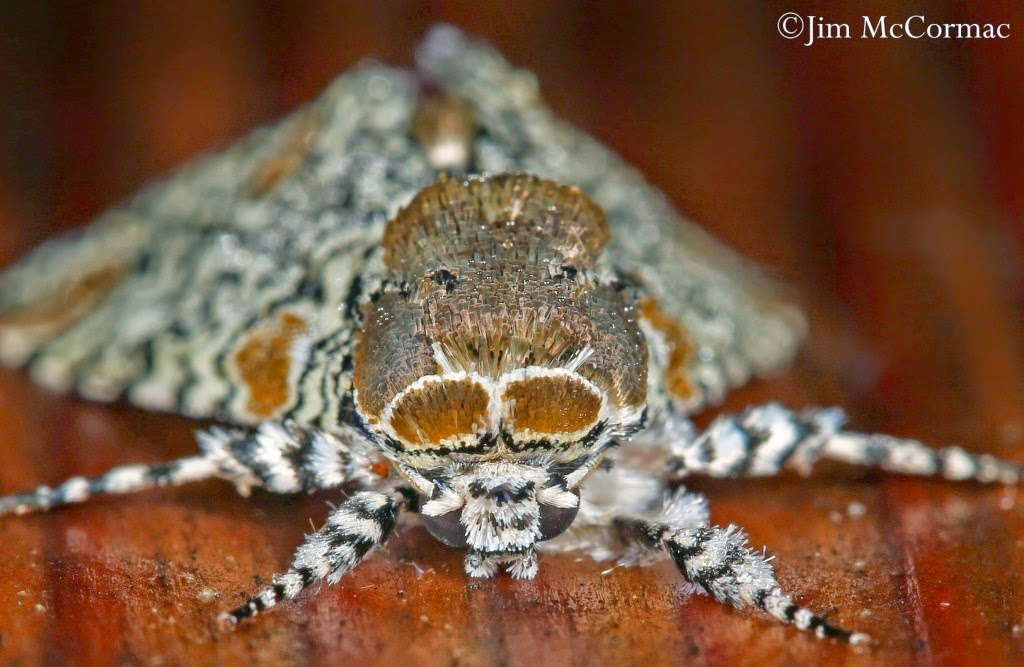 Seen down low and on its level, the Harris's Three-spot is truly odd-looking, but so is every phase of its life cycle. It looks to be wearing goggles, and has a very spiderish look to it.

Maybe, somewhere, Harris's Three-spot caterpillars and moths are commonplace and people in that magical land tire of them. But insofar as I know, it is a rarity and a thrill to encounter.

Thanks to Sue Walpole, Penny Borgman, and Brian Wulker of the Fernald Preserve for hosting our visit, and allowing our after-hours explorations of the grounds.

the h3s is indeed bewildering. the flail seems a creative and effective deterrent mechanism, and i'm dumbfounded how it detects presence of things in proximity to put it to use.