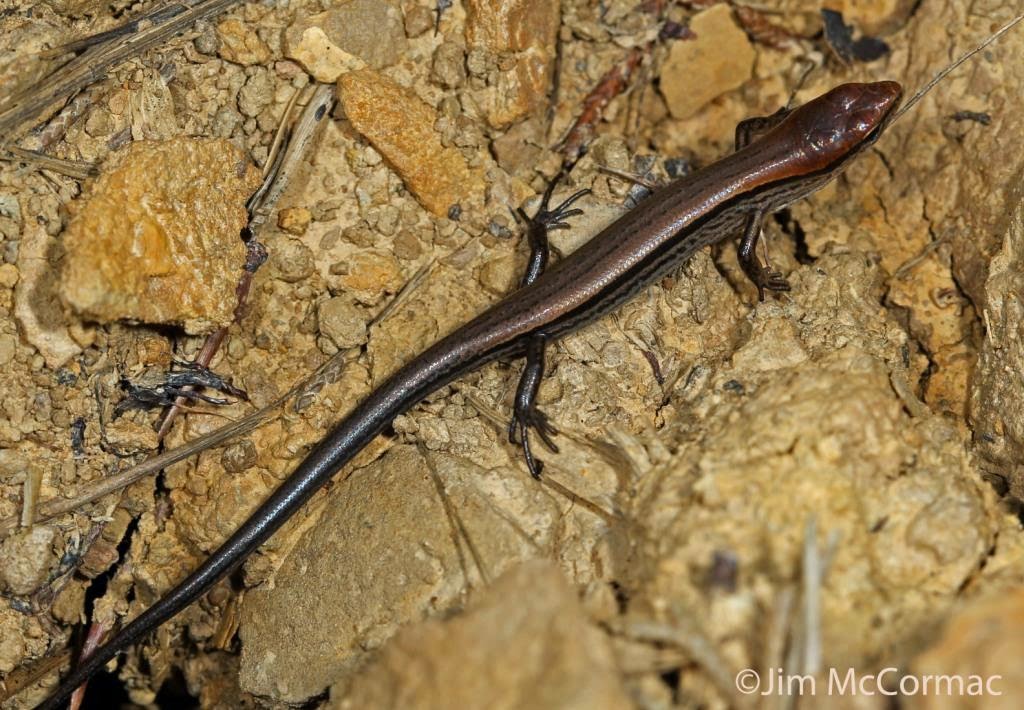 While in Adams County two weekends ago, Mark Zloba of the Cincinnati Museum Center and an employee at the Edge of Appalachia Preserve, mentioned an area where he always sees Ground Skinks. Would I be interested in seeing them? You betcha! Everyone has their nemesis creatures - animals that just seem to elude one, no matter how hard you try. Well, this skink was my nemesis Ohio lizard. I can't say that I really knocked myself out looking for one, but in year's past I had visited a number of sites where they were reported, sometimes with the express purpose of finding one, and had always failed. One of the little skinks peeks shyly over a log. We saw several, and it was great to finally make the reptile's acquaintance in real life. One can only learn so much from books and literature, and the Internet - there is no substitute for seeing the real McCoy and observing how the animal acts, and interacts with its environment.

Ground Skinks are very limited in their Ohio distribution. Insofar as I know, they have only been reported from the southernmost counties of Adams, Hocking, Scioto, and Vinton. I'm not sure if they are still present in Hocking County, and where they do occur they tend to be localized. This species is listed as a Species of Concern by the Ohio Division of Wildlife. 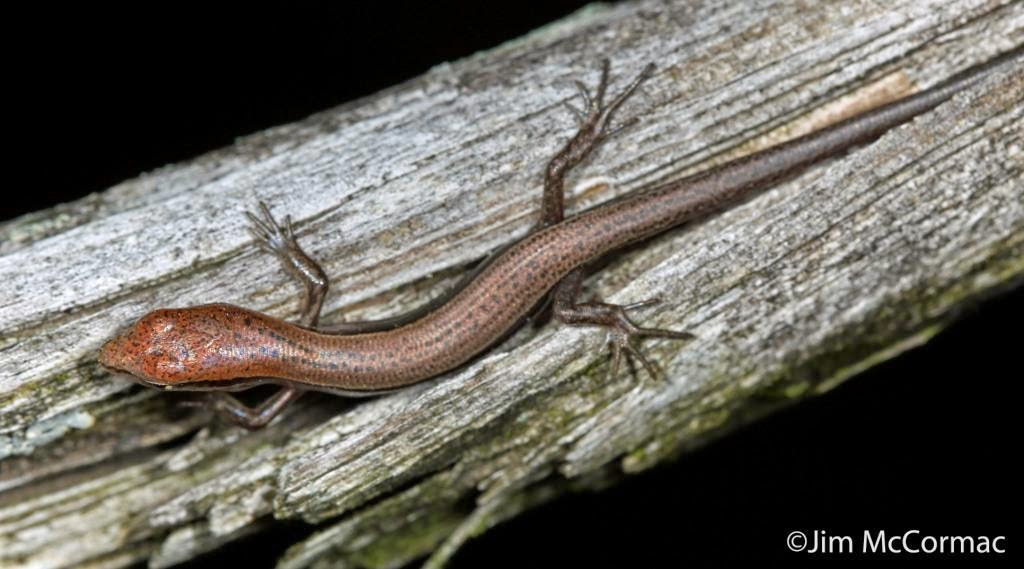 Ground Skinks are tiny; a large one doesn't even reach six inches in length. The ones that we saw were probably only three or four inches. Under close inspection, they proved to be exquisite animals. The rich coppery-brown tones of the head blend into a grayish brown back, and a neat black pinstripe traverses the skink's side.

These reptiles spend much of their time furtively hunting small game among the leaf litter. When not on the hunt, they hide under logs or other refuges. We found our first two out in the open, apparently foraging. One or two others were caught hiding under metal tins on the ground. I found them rather confiding and easy to approach and work with.

As this map depicts, the Ground Skink is a southerner reaching its northern limits in southern Ohio. Due to its limited occurrence here, it is a reptile that one is unlikely to stumble into. As with all rare/local snakes, lizards, and turtles, it's best to not broadcast the locations of populations. There is another well known Ground Skink site in Shawnee State Forest. I once stopped there, mostly to photograph some plants that occur at the same locale. It looked like a bomb blast had gone off. Apparently some "herpers" (short for herpetologists/reptile enthusiasts) had just been there seeking the skinks. They had flipped nearly all of the big rocks, but didn't replace anything how they had found it. Such disturbance cannot be good for the skinks (or other reptiles), and unfortunately such behavior does occur from time to time.
at September 15, 2014

Sites in Shawnee have been absolutely ravaged by irresponsible herpers. There was a "herp weekend" several years back where the public was taken to a number of sites in the state forest. Since then, sites have become public knowledge. And, sadly, many people simply do not take the time to leave no trace when it comes to searching for herps. It sucks because it ruins the habitat and also ruins the site for responsible herpers.