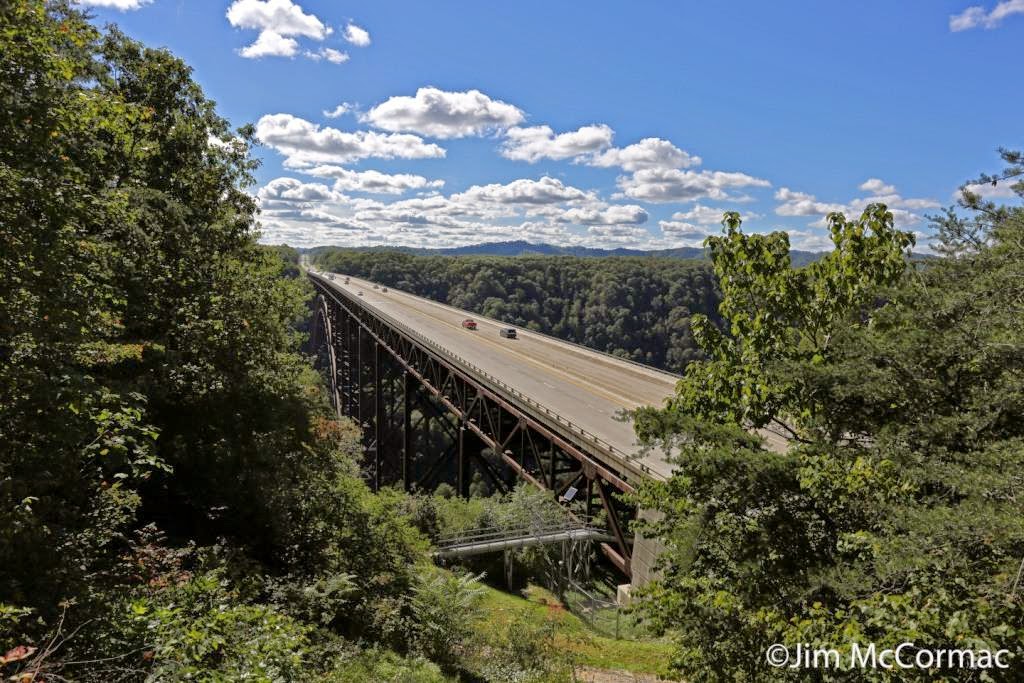 The New River Gorge Bridge, a span of incredible dimensions. It crosses the New River at Fayetteville, West Virginia, and is perhaps best known for the annual Bridge Day festival. But the bridge is a festival of engineering in its own right. When completed in 1977, it was the world's longest single span arch bridge at 3,030 feet. It's since been bested by a few other bridges, but no matter - the thing is still massive in every way.

I've been coming to this area every spring for at least eight years to participate in the New River Birding & Nature Festival. SIDEBAR: If you want to have a lot of fun, see scads of birds, AND lots of other biodiversity, CHECK OUT THIS FESTIVAL.

The bridge is a point of fascination to nearly everyone who comes here, and it was to me as well. When a company called Bridge Walk opened their doors four years ago, offering people the opportunity to traverse the span on a narrow catwalk under the roadway, I couldn't wait to do it. Well, it took until last weekend to finally knock this one off my bucket list, and it was worth the wait. I connected with my friend and festival co-organizer Rachel Davis, hooked up with the nice people at Bridge Walk, and away we went. 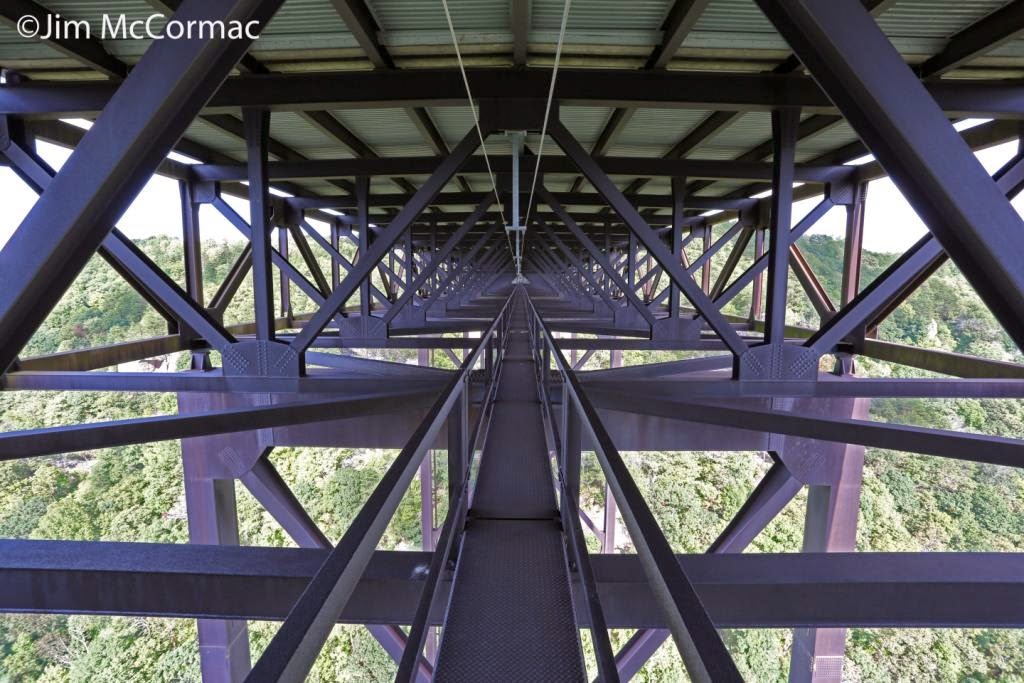 Should you dare to undertake the Bridge Walk, this will be your path. A narrow catwalk about two feet wide is located about fifteen feet under the bridge's road deck. For safety's sake, all walkers are connected via safety cables to overhead wires. There's never been a mishap, although on occasion a walker decides it might be in their best interest to turn back once they get a ways out under the bridge. 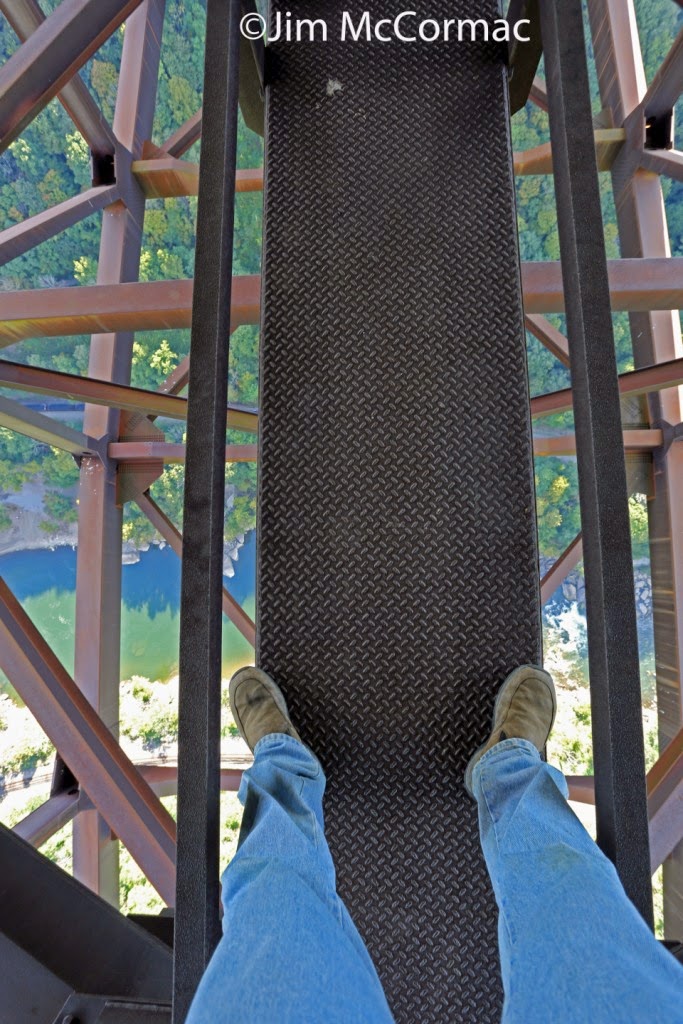 Your narrator stands high over the rushing waters of the New River. About 850 feet high, in fact. 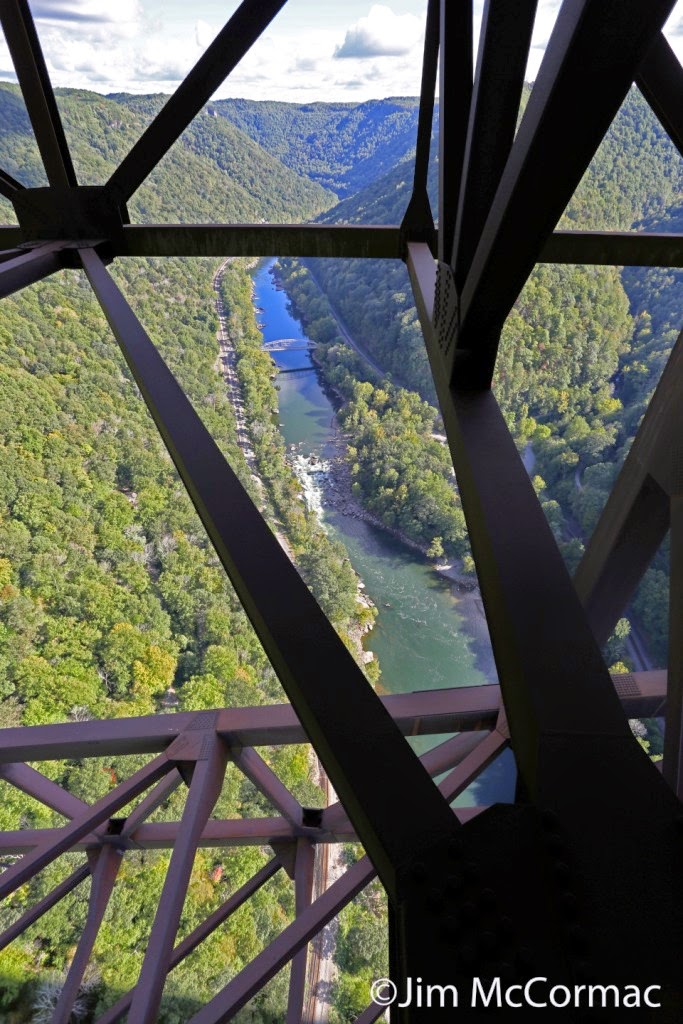 The views from up there are incredible, and they get better as one progresses towards the center of the bridge. Photography is tough, as you're in a well-shaded situation trying to shoot out into bright light. The catwalk allows a great perspective on the amazing engineering that went into the bridge.

If you think walking the catwalk would be daunting, it is an absolute cakewalk compared to what it must have been like to be a steelworker assembling the bridge. Or, one of the inspectors who regularly clambers over every beam to make sure that all is well. 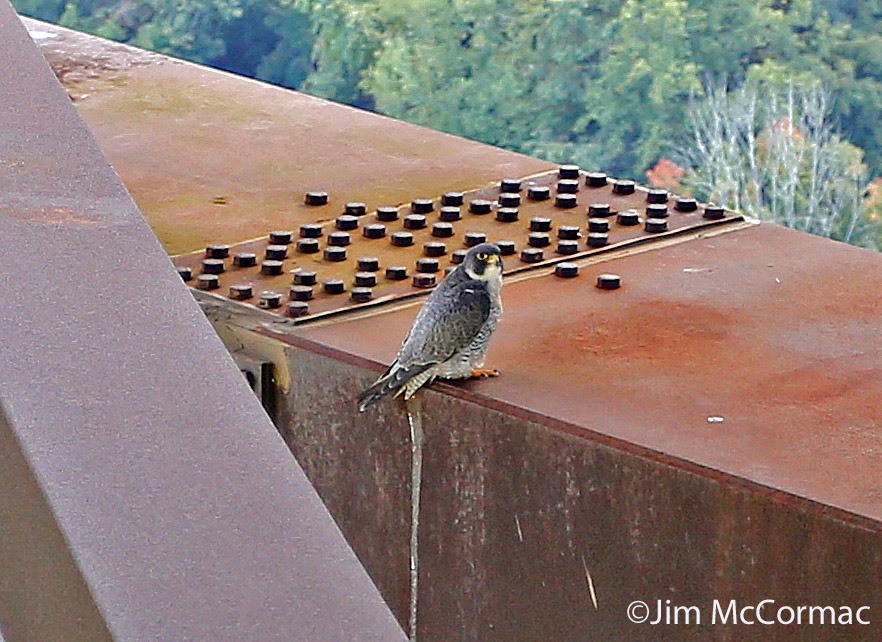 One of my primary goals was to see one of the local Peregrine Falcons that has appropriated the bridge. They began nesting in a nook near the top of the arch, over 800 feet above the river, a few years back. I had seen the falcons several times from the ground FAR below, but thought that it would be awesome to see them up at their level. It was.

A falcon glares at our group from his perch on a beam. The birds are quite use to human interlopers, and are relatively undisturbed by people. Not so with the Rock Pigeons, who, Rachel tells me, have largely abandoned their roosts under the bridge now that Peregrine Falcons are in the house. I can scarcely imagine how cool it must be to be a bird that, at will, can soar hundreds of feet above ground level and hang out on the beams of one of the world's biggest, coolest, tallest bridges. And from its lofty perch, spot a hapless flicker or cuckoo crossing the river far below, drop like a torpedo, and whack the prey in midair.

A short video showing one of the falcons dropping from a bridge pillar, and soaring out over the canyon. My wide-angle landscape lens wasn't up to the task of following the bird, but you'll get a brief sense of the viewscape offered from the bridge's catwalk.

That's it, I'm done. That video just gave me shivers. I am now weak-kneed

Thanks for sharing the photos! I drive over the bridge several times a year and love this perspective.