It's nice to see a bird species garnering more ink in the papers than most politicians. Today's Columbus Dispatch featured an article on Snowy Owls, peppered with photos from a number of Ohio photographers. The images are stunning, and a must-see. Read the article RIGHT HERE.

Snowy Owls have garnered lots of press this winter. Their irruption into the Midwest and eastern U.S. has been nothing short of phenomenal, and of such a scope that probably no one alive would have remembrances of a comparable event. It would probably be necessary to go back to the 1920's to recall an irruption of similar scale.

The Ohio total, insofar as I know, stands at 165 owls in 56 counties. New reports have tapered off, but still trickle in and I'm sure we'll learn of more. Many of these reports have come well after the fact, as observers learn that someone is interested in sightings after reading an article such as the one cited in this post. My updated map is below, and shows an interesting but expected distributional pattern. Owl reports are mostly lacking from the southeastern third of Ohio. That's the unglaciated hill country, which features rough topography and lots of forest. In large, not great Snowy Owl habitat. Owls have been reported from most of the glaciated northern and western parts of the state, and it isn't very daring to speculate that our large Arctic visitors have occurred in ALL of those counties. 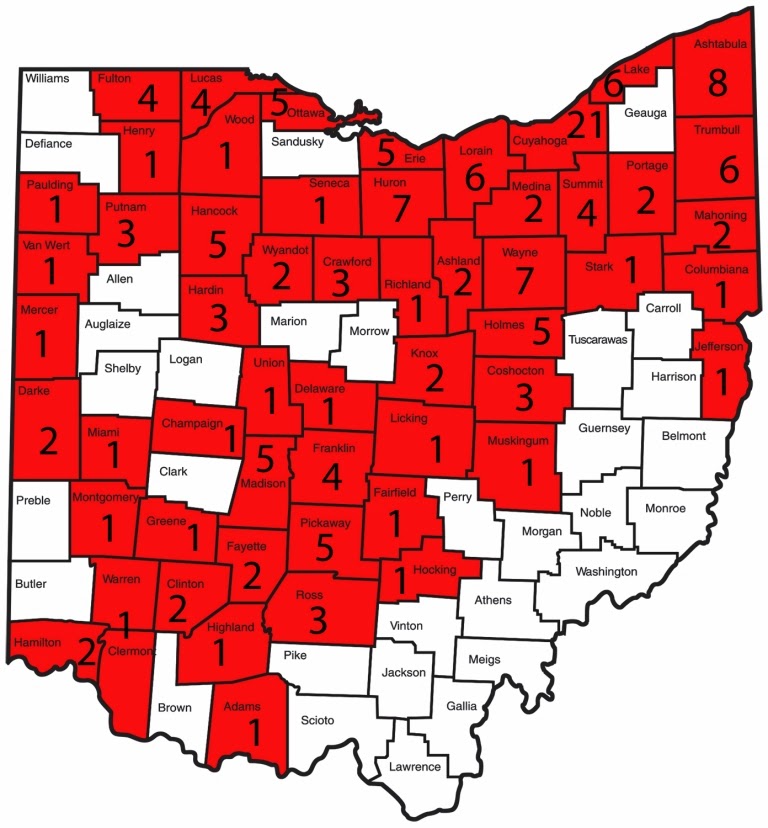