While Snowy Owl reports are slowing, I'm still regularly receiving new ones. Reports come in via the Ohio Birds Listserv, various Facebook groups, and personal messages. A recent article in Ohio Outdoor News triggered receipt of at least a half-dozen new reports, none of which would have probably made their way to the birding community. To date, we're up to at least 159 owls in 54 counties. There will definitely be more. I've heard of a number of injured birds that were taken to rehab facilities, but have not yet run down details on those birds.

An updated map is below. As always, if you know of other owls, please let me know. And of course, if anyone sees errors, omissions, numbers that need to go up, down, or whatever, please do correct me. There will always be some margin of error when trying to tally Snowy Owls, especially at certain Lake Erie locales where it is impossible to know with certainty if the same owl is being counted twice as they shift around. But I stand ready to be corrected by those who know better.

As word of the Snowy Owl irruption has spread through both traditional media and social media, an increased number of reports have come in from nonbirders. Prior to seeing a story or post about the owls, these observers didn't know if anyone would be interested or where to go to report their finds. Most of these reports have either had photos attached, or good descriptions. I am always interested in Snowy Owl reports and you can email me at: jimmccormac35@gmail.com

For more information about Snowy Owls in Ohio, and their probable source of origin, scroll down the alphabetized index of subjects on the righthand side of this page, and click on "Snowy Owl". This is certainly the largest irruption to hit Ohio in decades. The last invasion to rival this one was in the winter of 1949-50 when at least 41 birds were tallied in northeast Ohio, and an unspecified "Sizable numbers... along western Lake Erie and south to Cincinnati" (from Peterjohn, Birds of Ohio 2001). One must go back further, such as the winters of 1941-42, when perhaps 150 birds appeared in the Cleveland area alone, to find larger irruptions.

It is reasonable to assume that many more owls dot our landscape that haven't come to light. Keep your eyes open for large white objects in fields, on fence posts, telephone poles or other prominent perches in open landscapes. A few observers found their owl when it flew right in front of their vehicle. Alas, vehicles are one of the snowies' biggest downfalls, and many get Buick'ed during these irruptions. I know of at least four roadkills so far in Ohio.

To keep up on many of the current sightings, join the Ohio Birds Listserv or skim the Facebook Birding Ohio page. 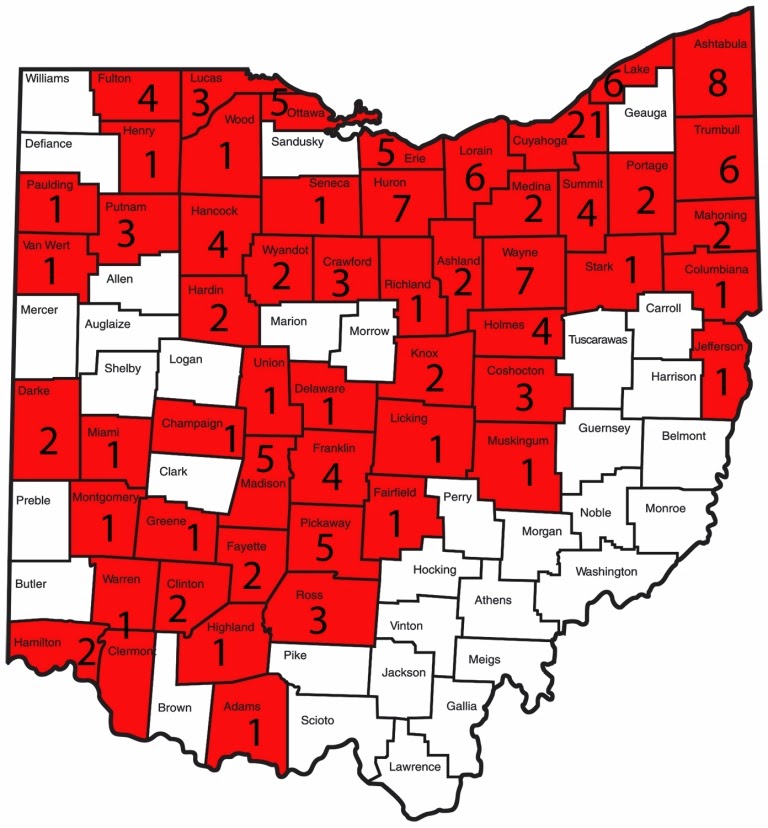 There is a snowy owl out on the Lake Erie ice that has a satellite tag. Here is the article:

I found this through a link on the ABA blog.