I've always liked the nickname "bullbat" for the Common Nighthawk, Chordeiles minor. They do look rather batlike as they gracefully course high overhead hawking insects, in an odd stumbling stutter-flutter flight. This is a species to keep an eye on; all indications are that Common Nighthawks have been in a nosedive in terms of numbers. Part of the reason is likely due to a diminishment of suitable nesting sites. Nighthawks favor gravel-covered rooftops, where they make a small scrape and place two camouflaged eggs. It seems that rooftop technology is moving increasingly away from gravel, though.

Dan Adamski, who works at the University Medical Center in Toledo, recently sent me some outstanding photos of a nesting nighthawk on the roof of his building, and I couldn't resist sharing them. 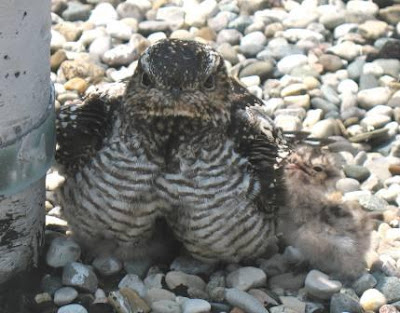 Straight on with a bullbat. Look closely to the adult's left; your right. A micro-bullbat! 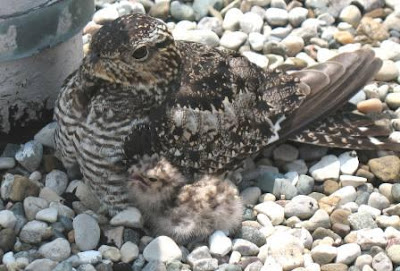 The tiny nightjar stays close to the adult female. In spite of just having pipped its way out of the egg, the little nighthawk already shows the large, rather horizontally flattened eye and big mouth of the adult. 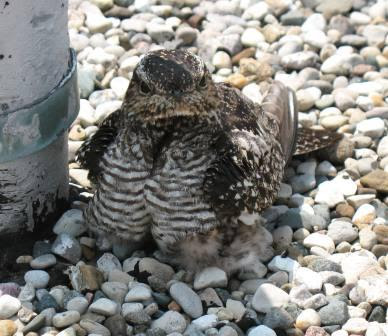 Here the faithful parent nearly sits on top of the youngster. It gets hot on those rooftops in July! Note how the nighthawk has made efficient use of the meager shade offered by that vent pipe. We don't know if the other egg just hasn't hatched, or if something has become of it. Dan promises regular checks and updated photos.

Common Nighthawks are without doubt one of our most interesting birds. Aerialists extraordinaire, their seemingly casual manner of adeptly snagging flying insects overhead, all the while uttering woodcocklike nasal peents, is a thing of beauty to behold. The courtship display of the male is unbelievable. From high over the admiring female, who watches from a rooftop or the ground, he engages in a curious stuttering flight, all the while emitting loud calls - look, look!! Then, he launches groundward in a dive that would spook a stunt pilot. Roaring down in nearly vertical descent, he, seemingly at the last moment, pulls out causing a loud, odd rippling boom to shout from his primary wng feathers. She, presumably, is impressed. If so, the eventual result is the orbicular little ball of fluff in Dan's photos above.

Soon, large numbers of nighthawks will (hopefully) be reported on the Ohio Birds listserv, streaming south. Sometimes flights of hundreds are tallied in an hour or less. They are headed a long way, clear to the Amazonian tropics for the winter. These flights seem to diminish almost yearly, though - this species is in trouble.

There are at least two things we can do. One, and the Ohio Ornithological Society and groups like it could take the lead, is to encourage nighthawk-friendly rooftop nest sites. Most people, if you explain the extreme coolness of this bird, may be inclined to take action if they can do so, at least easily. Placing gravel pads in out of the way rooftop locales might help. Working with building managers might bear some fruit.

The other is to report YOUR sightings to not only the Ohio Breeding Bird Atlas, but also to the U.S. Nightjar Survey. This organization has begun to collect data in all of the nightjars - here in Ohio, that also includes Chuck-will's-widow and Whip-poor-will.

Thanks to Dan Adamski for these fine photos, and letting us peek into the life of a bullbat.

I am so glad you posted these photos from your friend. I have always wanted to see what a baby Bullbat looked like. I have seen the adults many times. I have even seen a juvenile following an adult begging but never this stage of development.

I have never heard them called bullbats either. I don't really think they resemble bats but I guess because they come out about the same time at night people would think of them as bats.