Thanks to the outstanding atlasing efforts of Ethan Kistler, a potentially outstanding record has come to light. On July 3, Ethan was working successional habitats in Lorain County when he happened upon what appeared to be a Clay-colored Sparrow at first blush. This species, which is one of the characteristic brushland sparrows further west, is a great summertime rarity in Ohio. But something seemed amiss with this one. 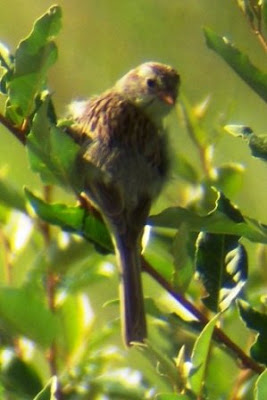 Our mystery bird peeks over its shoulder at photographer Aaron Boone. "What am I?" it may be saying.

So, last Wednesday Aaron Boone, coordinator for the Ohio Breeding Bird Atlas and Andy Jones, curator of ornithology at the Cleveland Museum of Natural History, set out to really get the scoop on this odd Spizella sparrow. And did they. Aaron managed a number of shots of the bird in the field, as above, and just as important, made a pretty good recording of the bird's song.

Then, they were able to net the bird and collect detailed information on plumage characteristics. They also harvested a feather which will have its DNA sampled and compared with pure parents of both Clay-colored and Field Sparrows. Their preliminary data suggests that the bird is indeed a hybrid between these two species; one of very few records if that's what it proves to be. The bird was released unharmed and quickly went back to business as usual. 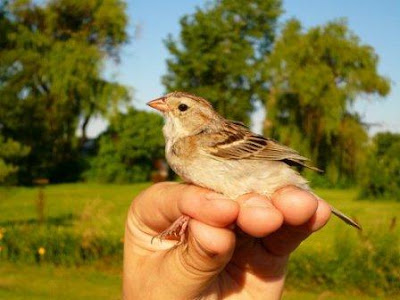 Both Clay-colored and Field sparrows are in the genus Spizella, which are small handsome sparrows that in Ohio, also include the Chipping Sparrow, and in winter, Tree Sparrow. Note that our mystery bird has the dull brown crown and patterned face of a Clay-colored, albeit duller than a "pure" bird would be. 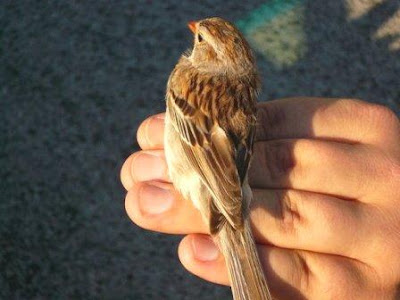 In this view, the pinkish bill and a semblance of an eye ring - both good for Field Sparrow - can be discerned. Other of their photos show these marks better.

Aaron assembled a series of photos RIGHT HERE, and included is a recording of the song, which is really interesting. Just click on the last photo of the field, and the track should play. It is very buzzy, a la Clay-colored Sparrow, but given in a cascading series of descending notes like a Field Sparrow.

I look forward to the results of Andy's DNA work with this sparrow. As near as I can tell, hybrids between these two species have only been documented two or three times prior, including one in Vermont in 1998.

Hybrids, subspecies, and variation within birds - all organisms for that matter - is very important to study and document, but that's the subject of a blog of its own. Thanks to Ethan, Aaron, and Andy for their great work in documenting this one. We will likely be able to read more about this case in a future volume of The Ohio Cardinal, which is now owned by the Ohio Ornithological Society with Andy at the helm as Editor.