This is shaking out to be a good butterfly season. One of the star vagrants are the always exciting Gulf Fritillaries, Agraulis vanillae. I blogged a little while back about one that Steve Willson found in Adams County. Then, I picked up my recently arrived Toledo Naturalists' Association newsletter and see that another was documented in the Oak Openings. Then, just today, John Howard sends along photos of one that he found today in Adams County. These records nearly double the previous Ohio records EVER of this rare stray from the south. However, "stray" may not really be the correct term for this species, as we shall see... 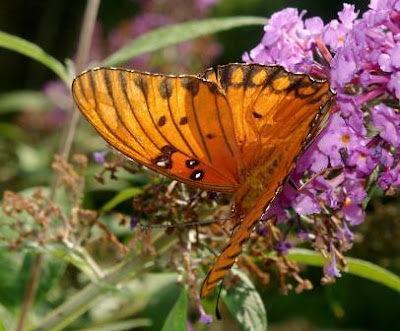 Gulf Fritillary, today, on John Howard's aptly named Butterfly-bush, Buddleia davidii, in Adams County. John notes he was "excited" to come home from work and see this beauty in his yard. Who could blame him! I'll be with John in this very county tomorrow, leading a field trip for the Wild Ones, and with luck we will see another Gulf Frit. You can be sure more are out there; keep your eyes peeled. And if you are interested in butterflies and would like to learn more, check out the Appalachian Butterfly Conference. 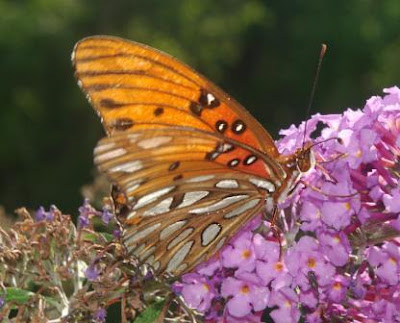 A view of the underwings, showing the flashy elongate silver spots. Fortunately, this beast was fixated on the sweet nectar of the Butterfly-bush, allowing John to get these great documentary photos. Gulf Fritillaries can make time, and if spooked can quickly be long gone. 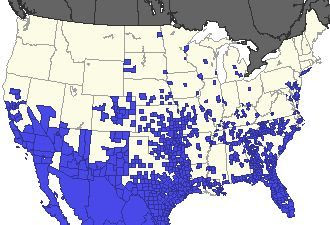 A map depicting the distribution of Gulf Fritillary. They, for now at least, generally only reproduce in the southernmost states. But as you can see from the map, there are scores of records far to the north, although this map-maker will probably be having to add many more blue dots north soon. Gulf Fritillaries are well known for mid/late summer dispersals well north of their typical range. Why? Someone not into biology might just assume they must be escapes, or have perhaps been overlooked until now, if they didn't understand concepts of species dispersal and range expansions and speciation over long periods of time.

Essentially, one might think of the Gulf Fritillary population as a giant army. Amongst the rank and file are "scouts". These scouts are tasked with finding, and if possible claiming, new territory. Thus, they are sent out in numbers, especially in years when climatic conditions are most favorable, and explore well beyond the typical range of the species. Most of them may perish far from home, as it were, and certainly don't establish new populations in places like, say, Ohio. But over the long haul, if changing conditions permit, they may creep northward as these scouts slowly lead the fritilllary army north and population expansions push the population into new territory.

The same scout and creep range expansion has happened with numerous winged animals, including in recent times the Cloudless Sulphur butterfly. Many species of butterflies and dragonflies are hyper-responders, able to react extremely rapidly to slight changes that favor expansions in their populations. It has been fascinating to watch some of the southern dragonflies, like Band-winged Dragonlet, turning up and breeding in northern Ohio, WAY to the north of their normal range.

These southern bugs moving north smack of responses to global temperature warming, which is creating more suitable conditions for them to the north of where they normally occur. I think butterflies and dragonflies are proving to be very important barometers of changing environmental conditions, and are well worth keeping close tabs on. It will be interesting to see what's winging around Ohio in 2018. I would almost guarantee there will be species of butterflies and dragonflies around routinely that we certainly aren't used to now.

If you see any Gulf Fritillaries, please let me know.

I made the mistake of planting Maypop (Passiflora incarnata) for Zebra Swallowtails. Maypop is really the hostplant for the Zebra Heliconian. However, with the increased sightings of Gulf Fritillaries, maybe my Maypop will be a host plant yet!

I agree that climate change is bringing butterflies further north, but it's confusing. I thought I was experiencing climate change last summer with the hot, dry summer. Now, I think our cool yet not-too-cold, wet spring is an example of climate change....

In any case, it seems like plants are thriving this year and the birds and butterflies with them.