Just like birds, butterflies sometimes turn up well beyond their normal ranges. Some species, especially larger ones, are powerful fliers and quite capable of traveling far distances in short periods of time. Because of their high degree of mobility and apparent fast response to warming average temperatures, butterflies are important to monitor in terms of population movements.

Steve Willson, of Adams County down on the Ohio River, must have been excited when he recently found a Gulf Fritillary. This is the species that graces the cover of Jeffrey Glassberg's excellent field guide, Butterflies through Binoculars: The East. As you might guess from the name, this species is a real southerner, and there are very few Ohio records. Steve's find would be comparable to, say, finding a Scissor-tailed Flycatcher if you are a birder. 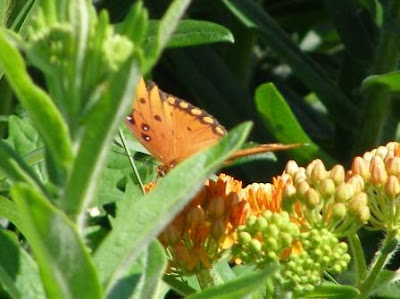 Steve's photo, which by his own admission will not be found anytime soon on the cover of National Geographic. Still, there's no doubt what it is, and Steve was on his A-game to get any photo at all. Gulf Fritillaries can be wary and easy to spook, and if they flush you may never see it again. I've seen plenty of them in south Texas and haven't always found them overly friendly. 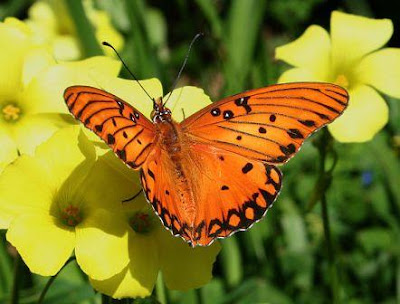 Here's a more revealing photo, courtesy of everyone's new Encyclopedia Brittanica, Wikipedia. This species will be an interesting one to watch in future years. Some other southern butterflies, like the magnificent Cloudless Sulphur, were at one time also considered rare vagrants to Ohio. Now, the large lemon-colored beauty is almost mundane in southern Ohio and turns up regularly to northern Ohio and even reproduces here, or attempts to. It will be interesting to see if Gulf Fritillaries follow suit.

Steve also found this rarity right in the heart of where field trips will be deploying for the upcoming Appalachian Butterfly Conference. With a number of trips heading afield and many sets of eyes, it will be interesting to see what odd species might turn up that weekend. If you want to join up and have some fun butterfly-seeking during the summer doldrums for birds - but when butterflies are awesome - just GO HERE.

Thanks to Steve for sharing his find, and photo.

I just had a cloudless sulpher laying eggs on the wild senna in my yard in Lake County this weekend. I also had them lay eggs in 2006. It was interesting to watch the development of the caterpillars. I planted the wild senna after seeing a cloudless sulpher in my yard years ago that just flew by and wouldn't land. Its a good example that if you plant it, they will come.