Return of the Raven

If one could beam themself back in time several hundred year, to the pre-settlement wilds of Ohio, the Common Raven would have no doubt been an obvious part of the landscape. The harsh, guttural croaks of this fascinating member of the crow family would have been ubiquitous, and our first settlers were certainly well acquainted with ravens.
These jumbo croakers did not fare well with the coming of white men and the resultant wholesale landscape changes. By 1900, they had essentially vanished from now-populous Ohio, and many other areas in the eastern part of their range.
But these big black birds are resilient. About a decade ago, reports starting trickling in; some indisputable, others less so, but all contributing to a growing body of evidence that ravens were continuing their recolonization of former Appalachian breeding haunts.
2008 will go down in history as a milestone for these fabulous birds in the Buckeye State. It was this spring that Common Ravens were finally verified as breeding again in Ohio, after a century lapse.

The rugged cliff-like highwall, formed by past strip mining, in Jefferson County where ravens successfully nested in 2008. The aerie is tucked in a recess of that inaccessible outcrop, and when I took this photo on April 29 there was still a young raven on the nest. Kudos to Scott Albaugh, who first found ravens in this area in 2006. Likewise to Ethan Kistler and Aaron Boone, who found the nest this spring.

One of the "juniors" from this year's nesting. There were four free-flying juveniles in addition to the one still in the nest. We may have been the first humanoids these young birds had seen, given their remote location and young age. Apparently all have done well; a group of birders saw what was probably the entire family unit nearby a few weeks ago.

Downy feathers and the fleshy gape of the bill can be made out in these photos: surefire evidence of the bird's young age. Ravens are highly intelligent and easily one of North America's most interesting birds. I would highly recommend reading Ravens in Winter, by Bernd Heinrich. Heinrich has spent untold hours following ravens and observing their behavior in the North Country, and writes about his "wolf birds" with eloquence. He has dubbed them with that lupine moniker as in some regions, ravens follow wolf packs, foraging on kills. they are even thought to lead wolves to potential kills, thus benefiting both species. Heinrich also writes of raven play: these social birds often seem to engage in antics, such as tobagganing down snowy slopes on their backs, just for amusement.

Bernd Heinrich himself is a study. A prolific researcher and writer, he has penned at least fifteen books, and not just on ravens. Other subjects he has put his formidable mind to include bumblebees, owls, trees, and insect thermoregulation. Amazingly, Heinrich is also a world class runner. Just after turning 40 years of age, he completed the Boston Marathon with a time of 2:25:25 - amazing! He went on to author another book entitled Why We Run: A Natural History, which delves into a scientific explanation of human's ability to ultra-marathon and how that evolved.

But back to ravens. 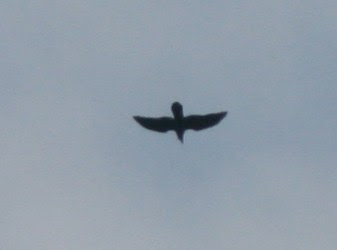 On July 11th of this year, April Sterling, in the company of Bill Murphy, managed this shot of a Common Raven in Monroe County. Like the Jefferson County birds above, Monroe County is in far eastern Ohio. Yep, ravens are on the move and reclaiming former haunts. These records fit well with the gradual westward expansion of Common Raven from Pennsylvania and the Appalachian Population. I have heard of credible reports in Ohio all the way from Washington County and Marietta to Trumbull County in northeastern Ohio in the last two years.

Keep your eyes peeled and your ears sharpened for giant wedge-tailed croakers. Let me know if you see any.

Raven(?) Riddle:
(Cleveland,Ohio eastern suburb)
In late January, a lone large glossy black bird flew from the East on a sunny afternoon. It landed on my drivers side mirror, and looked (only) directly into my eyes, through the window, like an officer asking for my license! After about 3 seconds it flew off continuing it's course. It's head was level with the top of my plain white Corolla while it was perched on the side mirror. No other birds or cars in site, AND,..my car was slowly moving, backing into a long driveway area. fyi: my chihuahua dog was, as usual, 'perched' on my shoulder viewable to the 'landing' area. We stayed totally frozen until my teen exclaimed,
"LIKE A BOSS!"
More like a Twilight Zone to me!
SO,..we'd love to have a bird expert fill in the blank:
LIKE A ____________?

I think I may have seen a Raven yesterday in Anderson Township (east of Cincinnati). Lots of clucking and clicking but no caw, cawing. Wish I could tell for sure. There was another crow or raven chasing it around. Didn't think it was really possible that I'd seen one here. Had no idea they were making a comeback.

I live in Columbus, Ohio on the north side. I have ravens in the neighborhood, at least 20 that seem to run together! I've lived in this house for seventeen years and never seen this many, this often. Any ideas why the "sudden" increase?

Checking two ravens out in my backyard; appear to be gathering materials for a nest in a stand of trees on a ridge. I live in SW corner of Ohio near Indiana state line.

November24,2016. I have been a bird watcher from a young age when my parents banded for the Alabama Ornithological Society. Having been stationed out west in the Air Fotce,I am quite familiar with ravens. I now live in Columbians county Ohio. On this date I witnessed a group of crows mobing what I thought was a red tailed hawk. They finally lost interest and left the trees where the intruder was perched. I was about to go into the house when I heard the unforgettable croak of a raven. I stood transfixed as the large bird lazily flew across the high pasture across the road in front of my house. Unfortunately,I was too astonished to capture the bird on video. Yes... Ravens are back in Ohio.

William said
Saw my first ever Raven today here in Ohio ..was hearing them off and on but wasn't quite sure that's what I was running into...saw two of them up close...one circled me for 10 minutes or more croaking continually...this bird looks like a larethen I saw another and it sat up in a tree top croaking and then made a gurgling noise... Was in Belmont county north of Halloway close to the Harrison county line

I have seen Ravens in my yard in Columbiana county N.E. Ohio beginning in 2017 I have lots a crows but these Ravens are huge! Twice as big..

I observed one today at Crown City Wildlife Area.

I live 20 miles n.w. of Springfield ohio. I observed what I first was the largest crow I've ever seen, but when I was closer I noticed it had a black beak. Didn't know there were ravens in Ohio until I found this article