Hot summer days make for excellent field work, with many interesting plants and animals out and about. It's sometimes tough to drag one's self into the muggy conditions, but there are always rewarding finds to be made. In the plant world, summertime dog days are tough on the botanist. Most of the good stuff is going to be growing out in the open under the scorching sun. It isn't like spring with its cool mild days, when much of interest can be found in the forest, with its as yet to be leafed out canopy. By summer, dense shade prevails within woodlands, and most of the flowering plants jump out into the open.

I went up to Holmes County last Saturday, along with Ann Oliver, to meet the folks at Carlisle Printing and some other people involved with publications of the Ohio Ornithological Society. We took a scenic route that passed through scenic Coshocton County. Not far out of the city of Coshocton, I saw a statuesque plant with small white blossoms out of the corner of my eye as we shot by. "Whoa! Turn around!" I pleaded, and fortunately Ann is very much into nature and obliged.

The roadside ditch that caught my eye. Growing in its wet clayey soils are a number of spectacular specimens of Glade Mallow, Napaea dioica. This sensational member of the Mallow Family can reach 6 - 8 feet in height. It has a spotty distribution and overall is quite rare in Ohio. The typical habitat is low-lying open ground in alluvial soils of floodplains. It does occur in wet prairies, but doesn't seem confined to that habitat. This was the first time I'd seen the plant in a few years.

This photo reveals the robustness of the plants. The clusters of white flowers are projecting beyond head high.

Many mallows have large flowers that are extremely showy. Glade Mallow blooms are rather ordinary; small and stark white. Collectively they are conspicuous and rather attractive, though, being held as they are high aloft and in tight clusters.

Perhaps the most interesting aspect of Glade Mallow are the leaves, particularly the lower ones. They are deeply cleft into five segments; each segment further serrated into rough edges. The overall effect of this plant is quite stunning, and it would make an outstanding species for the more adventurous gardner who enjoys fiddling around with native plants. 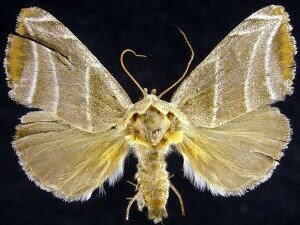 I will never be able to see or even think of Glade Mallow without thoughts of a tiny obscure owlet moth. Along the way, I've probably collected along the lines of 9,000 voucher specimens of plants, counting duplicates. These are all housed in various institutional herberia: everywhere from OSU to the Cleveland Museum of Natural History to the New York Botanical Garden.

In the process of preparing field-collected plants, it is very common to find various insects on the foliage. Many times, for better or worse, I've flicked these hitchhikers into the circular file. One day, probably 18 years back, I was in my office preparing a specimen of Glade Mallow that I had found in a remnant prairie pocket of the Pickaway Plains south of Circleville. On one of the leaves crawled a beautiful little lime-green caterpillar. I remember notching my finger back for the flick into the trash can, then hesitating. For whatever reason, I kept the caterpillar and later took it to entomologist-extraordinaore Eric Metzler.

I explained to Eric that because the "cat" was clearly feeding on the rare plant, that came from a rare habitat, I thought that it too might be unusual. Eric told me that it couldn't be identified with certainty in the larval stage, and possibly in part to humor a young man who displayed enough interest in the Lepidoptera to bring him a caterpillar, he took it home and raised it.

And lo and behold, the emerald caterpillar transformed into what you see above, an owlet moth so obscure it only goes by its scientific name, Bagisara gulnare. It is rare and scattered, and had never been found in Ohio before, nor according to Eric was its host plant known. A good case of the blind pig finding the acorn!

So, one never knows what one might find with a little effort and curiosity.