I just received a report and photos of yet another Gulf Fritillary from Gary, who lives in Pike County. On July 22, a Gulf Fritillary graced their yard, and his wife Sylvia was able to snap some nice photos. This certainly has been an unprecedented invasion of this southerner! 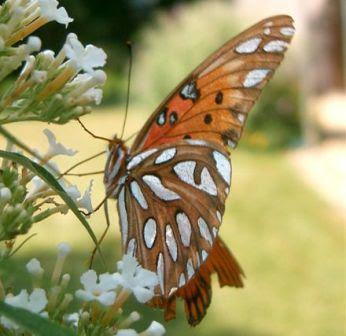 Gulf Fritillary, Pike County, Ohio, July 22, 2008. This is at least the fourth record for the state in the past two weeks. That's at least as many records as have EVER been reported in Ohio! 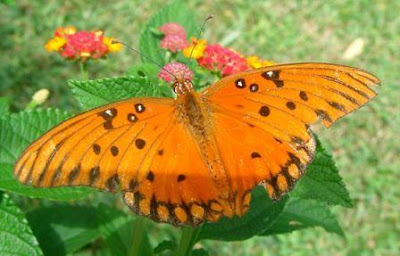 Sylvia managed some excellent photos of this vagrant long-winged fritillary. In the butterfly world, those are wings made for traveling! Lots of wing surface to body ratio, creating a strong flier that can really cover some ground. Look along the trailing edge of the wings. See how beaten up this individual is? It's probably been around for a while, and covered lots of miles.

Thanks to Gary and Sylvia for reporting this Gulf Fritillary! I'm always interested in reports of unusual flora and fauna.

I think I have photographed several of these butterflies at once at my home in Morgan County over the past couple weeks. The reason I say "I think" is because I have not yet keyed them out in a guide - but they look strikingly similar to the photos you have posted on this blog. I will send you some photos so you can take a look.