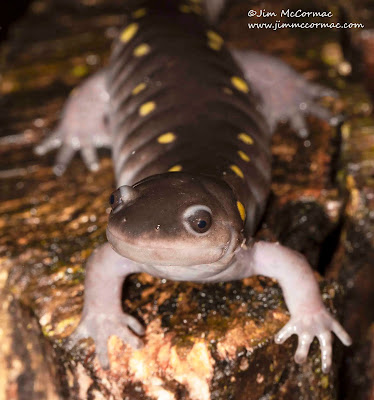 A Spotted Salamander stares, seemingly curiously, at the photographer. The annual spring runs of salamanders is a phenomenon that is one of nature's great spectacles, and eagerly awaited by many people of a herpetological bent, yours truly included.

Last Thursday's weather proved perfect to stimulate a big run here in Central Ohio. It warmed to about 60 F, and rain kicked in in the afternoon and continued into the evening. Such conditions spur the "mole" salamanders to emerge en masse from subterranean lairs and march overland to vernal pools. Once there, a breeding frenzy ensues, as we shall see. 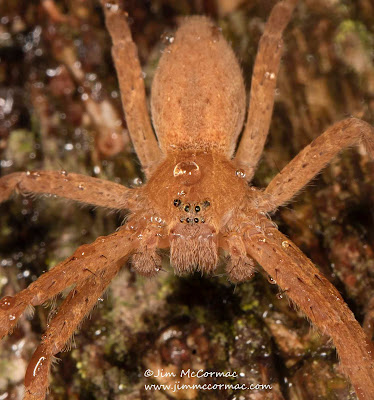 Big salamander migrations are nocturnal, and in addition to the amphibians, many other interesting nighttime creatures are likely to be found. This is an exceptionally showy Nurseryweb Spider, Pisaurina mira. This species can vary in overall coloration, and this one was a particularly pleasing shade of cinnamon. Many photos were made. 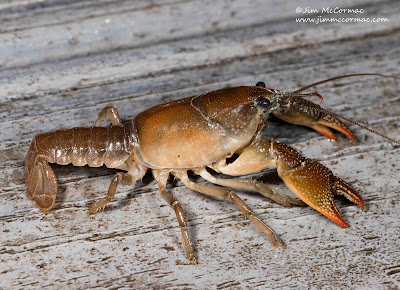 Mudbug on the move! Small numbers of crayfish often move along with the amphibians on warm rainy nights. I'm not sure exactly why; perhaps they are individuals seeking new turf. This is a Little Brown Mudbug, Lacunicambarus thomai, one of the burrowing species. I wrote about these, and this species in particular and its namesake, Roger Thoma, RIGHT HERE. 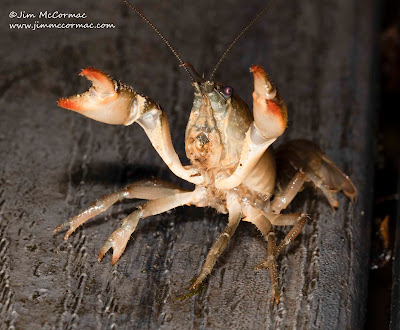 Crayfish make wonderful photo subjects, and I enjoy working with them. Watch those pincers, though. They aren't all bark and no bite. This mudbug was not too big, and I foolishly didn't take much caution in moving him to a better spot. He got a hold of my finger tip, and wouldn't let go for a minute or two. It's amazing the pinching power that even small crayfish have! 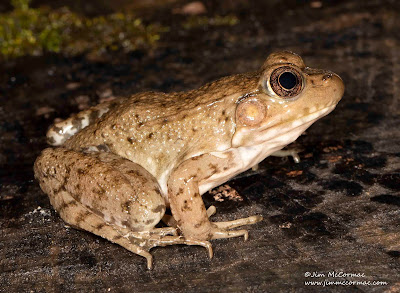 This young Green Frog, Lithobates clamitans, joined the parade. Frogs are always part of salamander nights. Most common, by far, on this evening were Spring Peepers. The Western Chorus Frog is usually numerous as well, but that species was not well represented on this excursion. 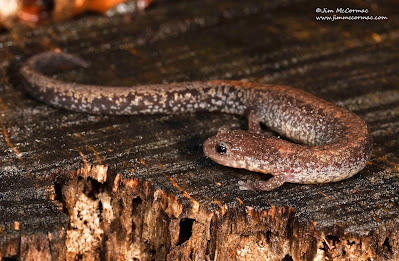 A handsome little Red-backed Salamander, Plethodon cinereus, poses nicely. This is one of the lungless salamanders and it does not breed in the vernal pools like the mole salamanders in the genus Ambystoma do. Nonetheless, Red-backs are usually wandering the forest floor on wet early spring evenings and we saw a dozen or so. 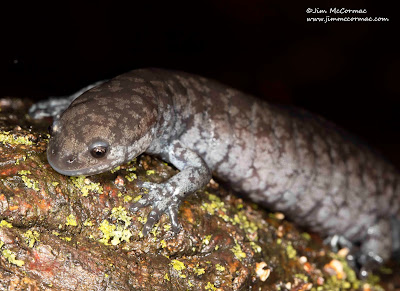 A Smallmouth Salamander, Ambystoma texanum, crosses a lichen-dappled log. While not as flashy as the Spotted Salamanders, under close inspection an intricate pattern of bluish-gray flecking is eye-catching and quite showy. I normally do not see too many Smallmouths at this site, but a few dozen made themselves known on this evening. 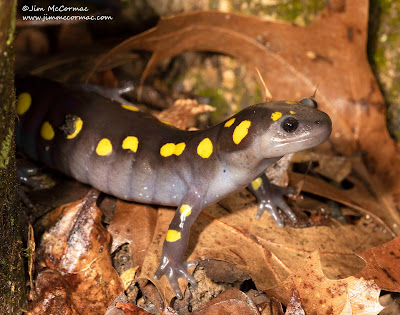 At this particular vernal pool complex, Spotted Salamanders are the undisputed stars of the show. There is a huge population here, and we saw hundreds. I'm sure thousands are present in this approximately 80-acre woodland. On a mass migration night, great care must be taken where one steps. It is like an amphibious army marching on the vernal pools.
Spotted Salamanders - all salamanders, actually - are wonderful photo subjects. They occasionally pause and rear up like this one. The better to get a sense of their surroundings, I suppose.
When we reached the main vernal pool, we knew we had timed it right. Hundreds - probably thousands, over the pool's entirety - of salamanders cavorted before us in a breeding frenzy sometimes termed "congressing". Beats the politicians any day of the week. A deafening chorus of Spring Peepers provides the soundtrack.
The male salamanders typically arrive a bit before the females and drop small whitish spermatophores into the water. Gravid females, fat with unfertilized eggs, then pick those up and use them to fertilize their eggs. In short order, big globular egg masses are deposited in the pool, and the salamanders vanish back into the woodland. It is a short-lived frenzy and one must drop everything and go afield on suitable nights or miss it. Most of the year, mole salamanders such as the Spotted Salamander live subterraneous lifestyles, out of sight and mind. I'm glad I was able to catch a performance this year, having missed the shows in 2020.
at March 13, 2021

What an interesting and enjoyable post! I really liked the inclusion of numerous species so I got a good sense of the overall evening. The video is a splendid addition. We haven't gotten the same conditions up here in the NE corner of the state yet, and I hope that any rain that falls in the near future occurs in the evening.

Thanks very much for the nice comment, Lisa, and I hope you catch a salamander run this spring!

Great post! What time of night do they typically 'congress'?

Thanks! Not long after nightfall, and may continue throughout much of the night.