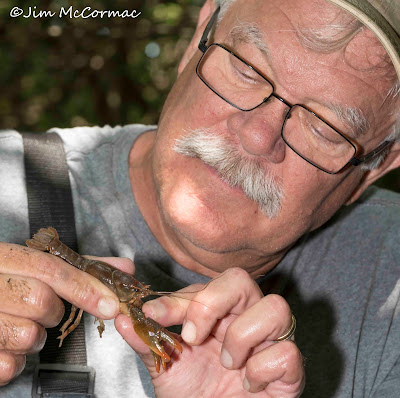 Ohio has plenty of wild “micro-lobsters”, although they’re largely out of sight and mind. And off the dinner plate. They are crayfish, and many a young Huck Finn wannabe grubbed for these pincered crustaceans in the local creek.

Stream-dwelling crayfish are the most conspicuous of the approximately 22 species known from Ohio. Far less known are the “mudbugs,” a suite of crayfish species that spend most of their time in the subterranean. Their presence is often revealed by impressive mud chimneys that ring the burrows.

Thus, a recent invitation from Anthony Sasson, who works with the Midwest Biodiversity Institute, was of great interest. He had organized an outing with two of the country’s premier crayfish researchers, Mael Glon of Ohio State University and Roger Thoma of the biodiversity institute.

Thoma has the rare distinction of having a crayfish named in his honor, and it was this crayfish that was our primary quarry. In the 67-year-old Ohioan’s decades of crayfish research, he has described at least a dozen new species. Thoma is regarded as one of North America’s foremost experts. Glon, at only age 29, is hot on his heels, having already described three new species, with more to come.

Soon enough, the four of us were bushwhacking along a small western Franklin County stream. In no time, Glon and Thoma had located crayfish burrows and set about the laborious task of extricating the occupants. Crayfish “noodling” involves stretching a gloved arm deep into the burrow and feeling for the crayfish.

Before long, a little brown mudbug was unearthed: Lacunicambarus thomai, Roger’s honorific crayfish. Thoma’s colleague Raymond Jezerinac described it in 1993, and now the secretive crustacean is known to occur in much of the state and in parts of Kentucky, Tennessee and West Virginia.

The burrows created by little brown mudbugs and similar species are marvels of excavation. Although most tunnels are only a few feet in depth, exceptional burrows might go 10 feet deep if that’s what it takes to reach the water table and permanent moisture.

Mudbugs spend most of their time in the cool, dank depths, luxuriating in an enlarged chamber at the tunnel’s terminus. Come nightfall, the crayfish ventures to the tunnel’s above-ground portal. It lies in wait for potential prey such as insects, worms and other small invertebrates. Vegetation also forms part of the diet.

So, “what good are mudbugs?” some might ask. Burrowing crayfish are keystone species — their work positively influences numerous other species. Snakes, including the rare Massassauga rattlesnake, use the burrows for shelter. Larvae of the federally endangered Hine’s emerald dragonfly mature in the tunnels.

Many thanks to astacologists Glon and Thoma for shedding light on a poorly known but fascinating part of the animal kingdom. 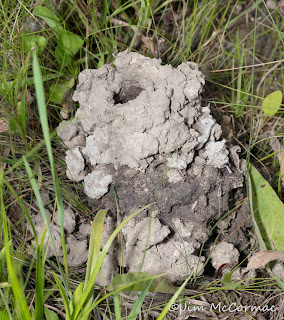 A crayfish chimney at the entrance to a burrow/Jim McCormac

I will be looking for these chimneys next time we go for a hike near a stream. I grew up near a creek in Akron, OH that crossed under Hilbish Ave. There used to be crayfish there. I recall wading in the creek and turning over rocks to see what we could find. I also raised 2 raccoons and would sometimes walk them down to the creek so they could dabble in the water and look for creatures. Since that time the creek was dredged and straightened. I don't know if there is any wildlife there now.


I added a sentence and changed the wording around a bit.