Last Thursday, August 1, I made an epic photographic foray into Shawnee State Forest. I really needed a hardcore solo shoot, and besides it was an 18-hour day (only had one day) and I can't find many photogs who will put up with such an agenda :-). Many interesting observations and images were made.

This vast southern Ohio forest is full of biological riches, and I had several primary targets in mind, not the least of which is featured here. The yellow-fringed orchids, Platanthera ciliaris, were just starting to flower, and I wanted to work some more on attempting to capture their pollinators. 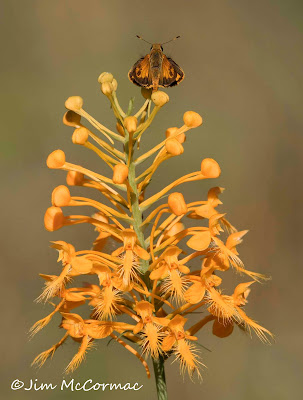 Yellow-fringed orchid is staggering in its beauty. Seeing a meadow dotted with gorgeous spikes of orangish-yellow flowers is an amazing experience, and as always I spend time just drinking in the scene.

But before long, the photographic game was afoot. Swallowtail butterflies are the pollinators (moths may visit at night, but I don't know that firsthand). As these butterflies are big, and the orchid's flower spikes are large, I arm myself as I would for birds. I lug out a lightweight camo chair, tripod, and telephoto lens. In this case, the rig was the Canon 5D IV and Canon's stellar 400mm f/2.8 II, with fill flash from a Canon 600 speedlite. I select the most conspicuous of the orchids, set up 15-20 feet away, and await my quarry.

At one point, a male zabulon skipper, Poanes zabulon, chose "my" orchid as a lookout. Male zabs are feisty as can be, and often sit in a conspicuous spot from which they dash out at nearly anything that flies by. Hoping for females, I suppose. This skipper could not have chosen a showier perch. 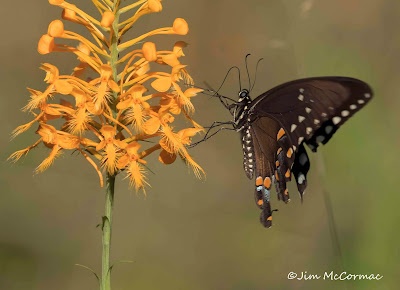 A spicebush swallowtail, Papilio troilus, drops in for nectar. Yes! This is what I wanted. The butterfly's long proboscis, and ability to hover/perch, allows it access to the nectaries that are deeply imbedded in the base of the long nectar spurs. In the process of mining its sugary reward, the swallowtail pollinates the plant.

I saw other swallowtails - only spicebush, I rarely see other species - nectaring at distant orchids. That's somewhat frustrating - over here! over here! I feel like shouting - but chasing them madly about with camera is no way to operate. It's just likely to spook the butterflies, and rushing into position makes it tough to compose a nice image.

Better to set up out of the pollinator's sphere of awareness, in perfect light and on a prime plant, and let the subject come to you.

Very nice photo. We have a fen (in an industrial "park") that has both yellow-fringed and white-fringed orchids and hybrids between the two which are very pale yellow. the site has been intensively studied as hybridization is apparently extremely rare.

Whoa! Now that I would love to see!