I made an epic foray into southern Ohio's Shawnee State Forest back on August 1, and had several photographic goals in addition to shooting whatever I might bumble into. One of these goals was to photograph a ruby-throated hummingbird in the act of pollinating a plant that the little birds are especially smitten with. Some success was had, and the story plays out below. 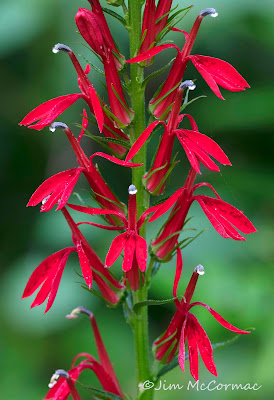 Cardinal-flower, Lobelia cardinalis, one of our showiest native plants. It seems fitting that such a gorgeous plant would have an interesting pollination ecology that involves one of our most charismatic birds.

The flowers on this spike are young, and mostly staminate (male) at this point. The arcuate grayish projection from the summit of the flower contains the sexual parts, and when the flowers are new they extend a brushlike clump of stamens capped by the anthers which contain pollen. 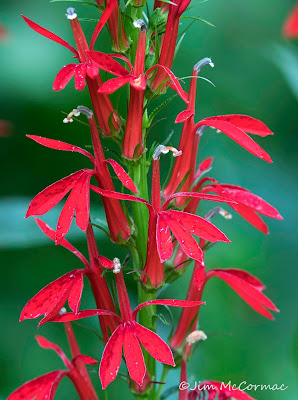 This is a different cardinal-flower in the same colony, but the flowers are older and have progressed to putting forth largely female organs. The stubby grayish protrusions are now mostly capped with longer extensions that contain the stigma, or female pollen receptacle. The male anthers have done their work regarding pollen dispersal, and been replaced by the opposite sex. 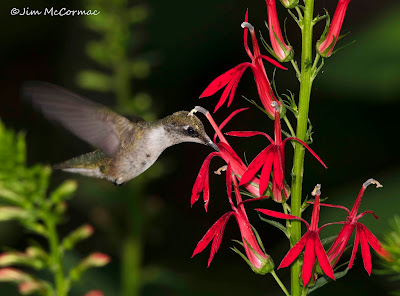 One must exercise some patience when trying for shots such as these. I found a few particularly stately cardinal-flower spikes, rigged up my tripod-mounted Canon 5D IV with 400mm lens, and 600 speedlite, then settled into a three-legged camo chair to await my quarry. As it happened, I did not have to wait long before a female ruby-throated hummingbird appeared. After making these images, I disassembled my big rig and went back with a wide-angle lens for general flower shots. While doing that, this tiny but fearless hummer returned and began working flowers within a few feet of where I knelt.

The hummers routinely visit cardinal-flowers, which apparently are prolific nectar-makers. The nectaries are deep within the corolla, forcing the bird to plunge its bill far into the flower. In the process, the top of its head makes contact with the downward-curving sexual flower parts. If the flower is in the male phase, pollen will be deposited on the hummingbird. If in the female phase, pollen from some other flower - hopefully from another plant - will transfer from the bird's head to the stigma, and thus pollinate the flower and allow production of fruit. 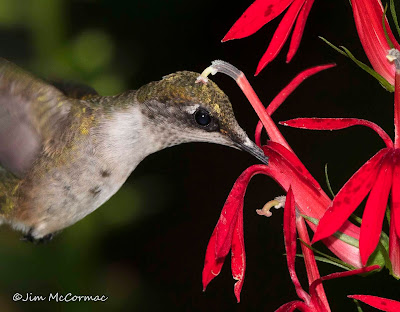 A closer view, showing the flower's stigma scraping the top of the hummingbird's head. It'd be virtually impossible for the bird to access its reward - the nectar - without coming forcefully into contact with the flower's reproductive parts. 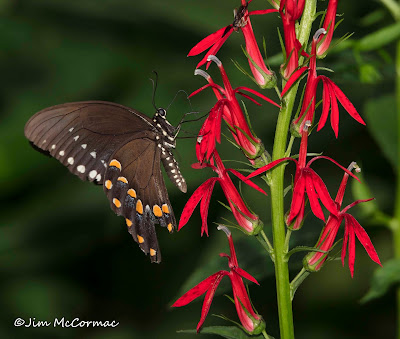 While hummingbirds certainly must be the primary pollinator of cardinal-flower, as is often said, I believe that swallowtail butterflies, especially spicebush swallowtail, Papilio troilus, must at least occasionally provide pollination services. This is a spicebush swallowtail working the same patch that the hummingbird above frequented. Swallowtails swarm blooming cardinal-flowers and at times there were a dozen or more mobbing these flowers. While the butterfly/flower dynamic is not as well architected as the hummingbird/flower arrangement, I bet pollen still gets transferred between both flower forms.

The coevolution of cardinal-flower and hummingbirds is a particularly showy example of the myriad ways in which plants have forged alliances with animals.

Hi Jim. love article and Hummers. odd thing this spring-summer 1st time 30yrs no Hummers at my place, Pike Co. property on Scioto river. put juice out mid may as usual and have not seen even one (long since removed juice after refreshing for several weeks. Gary Wayne

This past week hummers and swallowtails have exhibited exactly the same behaviors you so eloquently described and portrayed at our cardinal flowers here in western NC. Thanks so much for the superb explanation of what's happening, and as always, your excellent & stunningly beautiful photos. ~CT