I spent a long weekend down in Shawnee State Forest and vicinity, getting quite photo-intensive. Debbie DiCarlo and I were there to conduct one of our photo workshops, this one HERE. We had nine great attendees from far and wide (max number was ten and that one had some unfortunate last minute issues), and saw scads of stuff. Butterflies, caterpillars (LOTS!!), other insects, flora, snakes, rare Mississippi kites, and more. Hopefully I'll get to sharing some of our finds here, later.

The Shawnee workshop was our second to last of the year. The last one will be a doozy, though. We'll visit the Upper Peninsula of Michigan to shoot landscapes at the peak of fall color (October 6-10). Full details, and photos from last year's scouting trip, ARE HERE. 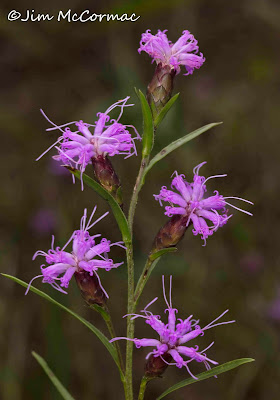 A particularly robust specimen of the slender blazing-star, Liatris cylindracea. Many plants have but one flower head. This elfin species is much shorter than the rest of our five Ohio blazing-star species, and is probably the rarest. It's listed as threatened. This population blankets a tiny roadside prairie near West Union, and I first saw the place at least 20 years ago. Good to know all is still well here. Adams County, last Thursday. 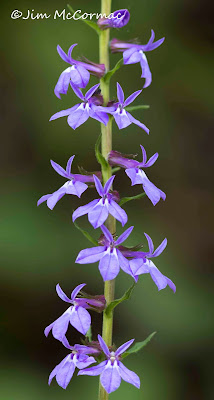