I was out in the marshes of Battelle Darby Metro Park (Franklin County, Ohio) at dawn yesterday. My main targets were waterfowl in flight - one of my favorite photographic subjects. Fowl were scarce, and I found myself watching the antics of recently arrived male Red-winged Blackbirds. They were busily proclaiming the borders of their territories, and occasionally squabbling with one another. As usual, I was tucked into some cattails to try and break up my profile. It worked with this blackbird, as at one point he alit quite close - this photo is scarcely cropped. I turned my lens to the showy fellow, and any waterfowl were temporarily forgotten. 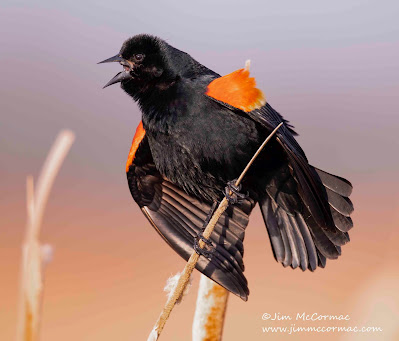 A male Red-winged Blackbird rages at a neighbor. We're in the narrow window where males have arrived and are setting up territories, but the females have not yet returned (at least at this site). Strong alpha males have been documented to have up to 15 females nesting in their turf, and they presumably sire most of the attendant offspring. But not all. Molecular work has shown that some females "sneak" into other males' territories, and mate with them. A regular soap opera in the marsh.I posted this image on Facebook, and received a fascinating bit of information about Red-winged Blackbirds from biologist Fiona Reid, as follows:
"I worked on red-winged blackbirds for my masters thesis. Our lab showed that it is song that
matters - if the males have their red shoulders painted black they keep their territory, but if they can't sing, they lose it. The cool thing is that you can temporarily mute them by popping the vocal sac, and in a couple of weeks it heals. The male loses his territory for those two weeks, then returns full throttle and drives off the new male once his singing ability is restored. Females only care about real estate and don't relocate during this process."

Finally, for your viewing AND listening pleasure, following is a short video of the stud above countersinging with several neighboring birds.

I live on a residential street in Marblehead OH. That area is loaded with many species of birds and waterfowl. For the past few years there has been a nasty red-winged blackbird nesting in my neighbor's large maple tree and every time I go out of my house to do anything he attacks me and my husband even though we are not there to do him any harm. I believe he has other nests in the area in addition to this one because it does not matter which direction I go he seems to find me and proceeds to attack. I have resorted to carrying an open umbrella when I need to go out for my mail or to be in my yard because I need the protection from his attack. Needless to say, the red-winged black bird is not my favorite species!