Nature: Tracing birds' lifespans is not an easy undertaking 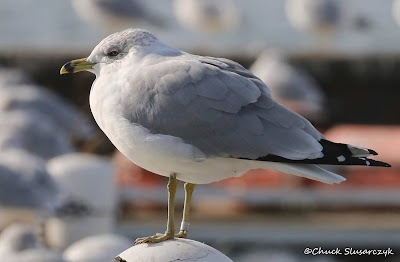 This nearly 29-year-old ring-billed gull, photographed January 9 in Cleveland, is the oldest known of its kind in North America./Chuck Slusarczyk

Nature: Tracing Birds' lifespans is not an easy undertaking

An aura of mystery surrounds the longevity of wild birds. We can’t just ask a chickadee its age. However, ornithologists have shown that some birds can live surprisingly long lives.

The oldest wild bird known is “Wisdom”, a Laysan albatross that returns annually to breed on Midway Atoll in the Pacific Ocean. She was banded there as a five year old bird in 1956! Wisdom turns 70 this year, and is still producing chicks.

Older birds have been documented, but only in captivity where they are sheltered from the perils of wild living. A cockatoo, Cookie, lived to 83, and a captive common raven survived to 80.

It seems the larger the species, the longer it can live. Cardinals and many other songbirds live for 2-3 years on average while comparatively massive albatrosses, gulls and others can survive far longer.

Gulls (not “seagulls”, despite Bach’s famed protagonist) can be notably long-lived. Several European and Middle Eastern species have documented to eclipse three decades, and a herring gull survived for 49 years in captivity.

In this country, gulls are probably not as well-studied as across the pond, and less is known of the life spans of American species.

Chuck took up gull study with a vengeance long ago, and is now one of Ohio’s premier experts. A renaissance man, he is also authoritative on aircraft, Great Lakes ships, moths, orchid raising, photography, and the history of Cleveland. Following a 28-year career in the aviation industry, Slusarczyk is now employed as a motorcoach operator.

Intellectual curiosity such as Slusarczyk’s is rare, and when Chuck aimed it at gulls he began to make notable finds. He regularly shares sightings of uncommon or rare species, often with helpful commentary on plumages or interesting life history observations.

But – in my opinion – Slusarczyk’s most significant gull find came on January 9 of this year, at the mouth of the Cuyahoga River. He noticed a ring-billed gull – Ohio’s most common species - with a silver band on its leg, and managed to get diagnostic photos of the band’s numbers.

A query to the U.S. Geological Survey’s Bird Banding Laboratory soon produced results. Chuck’s gull was banded as a chick in Toronto, Ontario, Canada, on June 18, 1992! Nearly 29 years later, the gull is alive and kicking, enjoying a winter vacation in Cleveland.

This is the oldest known ring-billed gull, and one of the oldest documented gulls in North America.

Documentation of banded birds by keen-eyed observers like Slusarczyk offers a glimpse into the potentially long life spans of gulls and other species. And these reports represent a vanishingly small percentage of the species involved. For instance, the total ring-billed gull population is estimated at about 2.5 million birds. There could be a centenarian among their ranks.

Why do gulls live so long? If they make it past the juvenile stage, life expectancy skyrockets. They’re large and tough, powerful flyers, resourceful and intelligent, opportunistic feeders and have few effective predators. Such characteristics are fertile ground for spawning avian Methuselahs.

Naturalist Jim McCormac writes a column for The Dispatch on the first, third and fifth Sundays of the month. He also writes about nature at www.jimmccormac.blogspot.com.
at March 22, 2021

We have a male cardinal that has been attacking the window in our living room every spring for 5 years. His behavior is so much the same every year I have no doubt it is the same bird. He is doing it right now. It will continue, with short breaks, all day. I’m not exactly sure at what point of the year he quits. I think it is probably around July or so. I get so used to the sounds that after a while I don’t pay any attention to it, so I don’t realize when it stops.
I do have to explain it to guests when they get the look on their face that says,” what on earth is that noise”!
As the spring goes on he will move to other windows. I have tried putting photos of human faces in the window, but he is not deterred.
I thought you may be interested as I’m pretty sure this cardinal is at least five years old!