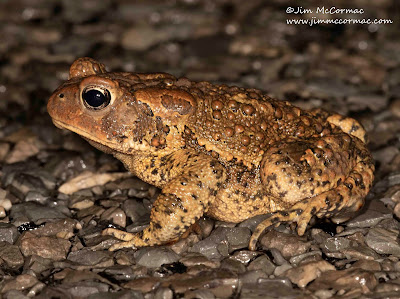 An American Toad sits on a damp road. Fortunately most of the roads that I cruised this evening have nearly no traffic on them at night, so amphibian mortality is low. That's certainly not the case everywhere.

Last Wednesday evening turned out to be warm - temps in the 50's F - and rain started spitting around 9 pm. One often doesn't know whether conditions will be optimal for amphibian movements - warm and wet - until late in the afternoon the day of the show. That's how it was this day. I didn't pull the trigger to make the hour drive west to some productive back roads until late in the afternoon.

It was a fairly good call. I think a lot of the salamanders have already made their vernal runs to breeding pools, and departed back into subterranean haunts where they will remain out of sight until next spring. But enough amphibians were on the prowl that it was an interesting foray. In all, eight species were tallied: American Toad, Green Frog, Northern Leopard Frog, Spring Peeper, Western Chorus Frog, Eastern Tiger Salamander, Smallmouth Salamander, and Unisexual Salamander. 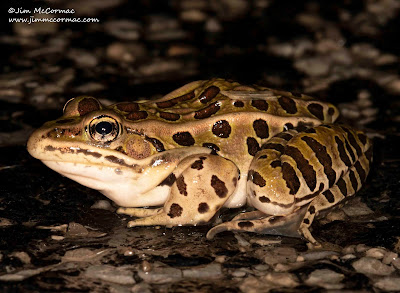 A Northern Leopard Frog crouches before the photographer. During the day, these frogs are alert and wary, and making close approaches is far more difficult. After I finished photographing it, I gently picked up the frog, took it far into the grass on the side of the road that it was headed for, and set it down. The frog never flinched. Try that during daylight hours and see how cooperative a leopard frog is. It's far easier to work with amphibians at night, when they don't act nearly so warily.

An apparent "unisexual" salamander rears up like a dragon. They are so-named as virtually all the individuals in these populations are female. As you might expect, the dynamics behind this get complicated. Basically, the unisexuals pick up spermatophores from any of several species of "pure" related mole salamander species. Thus, they are able to fertilize their eggs but as a result are hybrid mixes. The animal in the photo might have the DNA of Blue-spotted, Jefferson, Smallmouth, and Tiger salamanders - maybe even Streamside salamanders. Probably still much to sort out with this phenomenon. 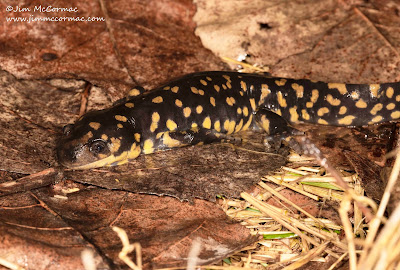 Finally, the Holy Grail of this evening's search, an Eastern Tiger Salamander. On a wet warm early to mid-March night such as this, I usually come across some crossing roads. Not this evening, and I suspect they were mostly done for the year and out of the pools. So, I went to a pool that I knew they used for breeding, and Voila! A few were still in the water, swimming and floating about like fish.
The individual in the photo was actually in the act of leaving the pool, as I suspect most had already done. It was not particularly cooperative, hence the lack of stellar photos. The amphibian had places to go and was in a hurry to get there. I don't like messing around with salamanders too much, or touching them if at all possible. Usually a good tactic is to just cover a salamander with your hand, like a tent, for a bit. Often when you pull away, it'll remain frozen for a while, allowing for some shots. If you do see and decide to handle an amphibian, always make sure your hands are wet.
Eastern Tiger Salamanders are impressive beasts, with big ones reaching nine inches or so. They often breed in more open habitats than other Ambystoma mole salamanders. This particular pond is wide open, with no woods nearby. It's in an area where mass migrations of tigers have been observed, although I have not yet managed to catch one of those in progress. I'll keep trying, though.
at March 20, 2021