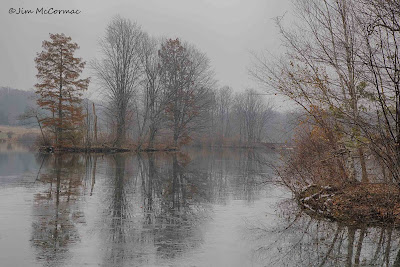 Corning Lake in the Holden Arboretum, on a chilly, foggy morning.

I visited the amazing Holden Arboretum yesterday for a meeting, and of course threw some photography gear in the car. The 3,600+ acres of the arboretum, which is a bit to the east of Cleveland, is a goldmine of interesting subjects. Following the meeting, we headed out to snap a few photos, mostly intending to shoot landscapes. The day was perfect for that, with persistent fog misting the grounds.

Days such as this, especially as wind was nearly non-existent, are great for shooting moody landscapes. Shutter speed is inconsequential as long as one is using a tripod. The image above was made at f/16, with a 1/2 second exposure at ISO 100. Good luck hand-holding that and achieving a sharp image. 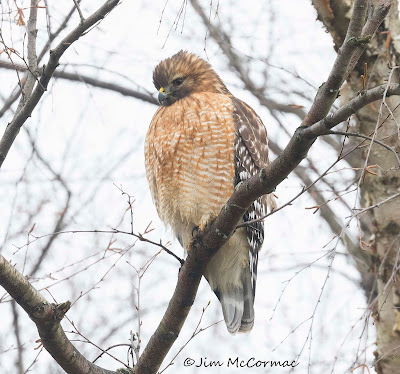 An adult red-shouldered hawk attentively watches a garden below. There must have been a vole or some other rodent at work in the duff of the old plants. The hawk's head was on a swivel as he watched the potential prey.

I saw the raptor a little ways off, and being a big fan of this most beautiful of eastern Buteo hawks, naturally wanted to make some photos. Red-shouldered hawks tend towards the tame, especially ones that live in places with lots of people as this one does. And sure enough, the bird was not put off by my approach and largely ignored me as it fixated on the vole or shrew or whatever it was.

Fortunately I had Canon's remarkable little 100-400mm II lens already mounted on my camera, which was on the tripod. I like trying to create tight landscapes with telephotos and that was my game until the hawk surfaced.

The challenge was light. Completely overcast white skies and fog do not offer ideal bird photography conditions. If I were to shoot the bird at any sort of "typical" setting, the ISO would have been sky high. I am not a fan of enormous ISO ranges, especially if cropping of any sort will be necessary. We're talking grainy images, even with noise reduction applied in post-processing.

As it became clear that the hawk was unconcerned with me, I only had to hope it would remain in place long enough to practice some alternate photo tactics. With the gear firmly locked in place on the tripod, and at a comfortable working range from the animal, I dialed in f/11 to create sharpness throughout the subject, and set the two-second shutter delay option. Because of the awful lighting, it was necessary to go to +2.3 exposure compensation. Once focus was set - on the bird's upper breast* - I flipped the camera into Live View mode. This eliminates any internal movement from the mirror, as it's now locked up and doesn't activate. All of this gave me a shutter speed of 1/50 - too slow to handhold and expect much in the way of crisp images, even with the 100-400's stellar image stabilization. The ISO was 800 - near the upper limits of what I prefer, but okay and it was ISO that was largely driving the shutter speed that I selected.

Once all was set, it was just a matter of activating the shutter button, and hoping the bird didn't move between then and the taking of the image. It did fidget a few times, but for the vast majority of the shots it didn't. And I got something. Shooting against blah white skies won't give the pop that superb lighting conditions will, but sometimes that's all one has to work with. And not many animals will cooperate or remain immobile long enough to employ these photographic tactics, but when they do, this is a way to keep the ISO to a sane level and thus create less grainy images. I've used it on roosting owls and nesting birds in dim light, for instance. Thus, I can remain well out of their disturbance zone, and get images that can be cropped in without noise manifestation caused by high ISO.

*A minor gripe about the 100-400mm II lens is its seeming inability to focus on tiny areas with great precision. The reason that I had to focus on the hawk's upper breast is that the camera/lens combo could not auto focus on the eye. I could have tried to manually focus there, but prefer the bulletproof accuracy of auto focus, and in single-shot mode, the auditory beep that proclaims focus has been achieved. With a relatively small f/11 aperture, it wasn't a big deal, though. And I am probably spoiled by having some of Canon's larger prime telephotos. Those lens are incredible in their ability to focus in with laser-like precision on the smallest of targets, including the eye of this raptor in bad light. But the little 100-400 costs WAY less than those big primes, and one can't expect everything at that price point. And in general, the 1 to 4 is a sensational lens. I'm nitpicking here :-)
at November 20, 2019