A plethora of pipits 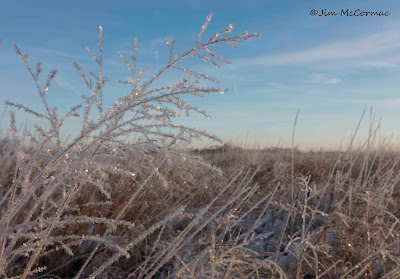 A perfect storm of snow, followed by some rain and sleet, followed by a major temperature plunge, left much of Ohio enshrouded in an icy wonderland. Yesterday brought our first really cold weather, and I was out before dawn to experience it.

The virgately branched inflorescence of a tall goldenrod, Solidago altissima, shimmers with crystallized ice. It was 1 F when I made this shot. A vast field of iced over Indian grass forms the backdrop. Conditions such as these can make for good birding, as 1) birds are often more approachable in bitter cold, and 2) species that typically forage in fields such as this are forced to roadsides to find spilled grain, weed seeds and other fare.

Make no mistake, #2 is not a good deal for birds, as the incidences of road strikes by vehicles can skyrocket. Fortunately, the back roads of northern Marion County and southern Wyandot County, where I was yesterday, see relatively little traffic. Despite seeing scads of birds foraging along roadsides, I saw not a single roadkill. 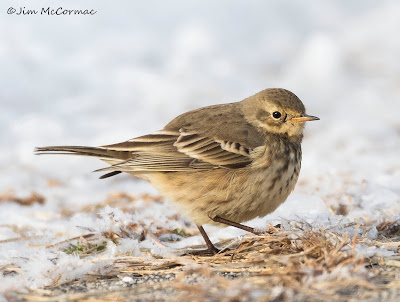 Most interesting, to me at least, was the number of American pipits. I think I put a conservative estimate of 75 individuals in my eBird report for the day. The overall tally may have been 100+. Small flocks were scattered far and wide, sometimes comprised only of pipits, but often mixed horned lark-pipits flocks. The most interesting group contained a few dozen larks, a smattering of pipits, and two snow buntings. The bird in the photo was part of a group of four, and they were cooperative. Unfortunately for the photographer, it was only about 4 F and I was lying on the cold tarmac to try to get on their level. Tough shooting.

American pipits breed in the northernmost reaches of North America, in the tundra, and in high alpine meadows in the western part of the continent. The nearest nesters to north-central Ohio, where I made yesterday's observations, are about 1,000 miles to the north. Many pipits pass through Ohio in both spring and fall migration, but they are largely overlooked. The birds are prone to foraging way out in big agricultural fields and are easily missed. They are powerful flyers and diurnal migrants, but if one is not familiar with their flight calls as they pass high overhead, they'll pass by undetected.

The peak fall passage extends from mid-October through November. This recent early wintry weather forced pipits out of the vast agricultural hinterlands and to the roads where people could see them. Much of Ohio was awash in pipit reports, shedding light on just how many birds move through the state. 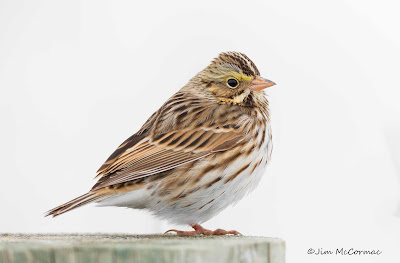 Also notable was a flock of five Savannah sparrows forced to the roadsides. This is another extremely common fall migrant. However, we're past peak fall passage, which mostly occurs from late September through late October. I suspect these birds are going to attempt to winter locally. They occurred in an area of 1,000+ acres of conservation reserve program lands dense in Indian grass, Sorghastrum nutans.  These thick grass stands create their own ecology by spawning scores of seed, insects and their eggs/larvae, and offer protection from sometimes brutal winter elements. I've found Savannah sparrows here before in January.

ASIDE: This beautiful little sparrow is NOT named for the plant community of scattered large trees, which is properly spelled savanna. Rather, the common name stems from Savannah, Georgia, where Alexander Wilson bagged the first specimen. As a "species" the Savannah sparrow is widespread and complex. Nearly 30 subspecies have been described and many of these variations are quite different in appearance. 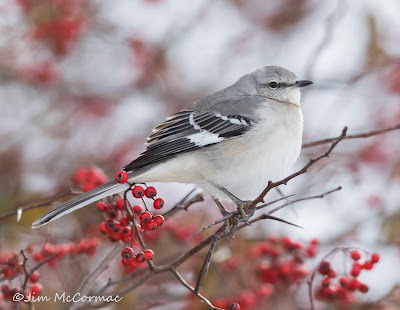 This northern mockingbird was one of five or six that had staked claim to a long fencerow of scrubby hawthorns and plums. The trees were rich in fruit, and those berries will play a big role in getting these mockers through the winter. Like gang toughs, the mockingbirds zealously defend their turfs against all comers, especially other frugivores.