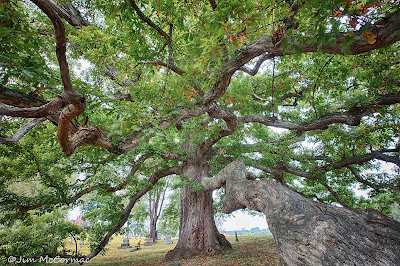 On Sept. 28, I finally corrected an enormous arboreal oversight by visiting the legendary “Logan Oak.” Located in Old Logan Cemetery in the city of Logan at the gateway to the Hocking Hills, the gnarled white oak is a Methuselah tree.

Why I waited so long to pay respects is beyond me. The tree is splendid in every way. Huge gnarled limbs radiate from a skyscraper trunk, creating a gargantuan bonsai that must be seen to be believed. I had intended a brief visit, but my homage extended for more than an hour.

The Logan Oak is easily the largest and most ornate tree of its ilk that I have clapped eyes on, and I have seen scores of its species. It’s awesome from any angle, and I did my best to photographically illustrate the sheer majesty of this plant.

Similar nomenclature sometimes causes confusion with the former Logan Elm. That tree was just south of Circleville in Pickaway County, and was a huge and fabled American elm. Its name commemorates Chief Logan of the Mingo tribe. A storm brought the tree down in 1964, its vitality sapped by Dutch elm disease.

A placard near the Logan Oak puts its age at 600-plus years. I’m not sure how that was determined, and six centuries would put the oak at the extreme upper limits of life span for Quercus alba. Even if we estimate a bit more conservatively and age it at 500 years, that’s still an ancient organism.

Five centuries of growth makes for a big tree. It would take many people to join arms around the trunk, and lower lateral limbs would make big trees in their own right. The crown spread is an enormous leafy arbor that covers 9,000 square feet. That’s about the expanse of two Clintonville lots.

Amazingly, the Logan Oak is not the largest of its kind in Ohio. That honor goes to a tree in Mahoning County. Its circumference is 298 inches, the crown spread is 128 feet, and this oak is 94 feet tall. As impressive as those stats are, the Logan Oak is not far behind, and bests the official state champion in ineffable grandeur.

If we arbitrarily made the Logan Oak’s birthday today, Nov. 3, and accepted an age of 500 years, that means the tree sprung from its ancestral acorn in 1519. The oak’s inaugural year saw Cortes and his band of conquistadors invade Mexico and Leonardo da Vinci die at age 67; the Ohio country was still wilderness. It would be 284 years before Ohio’s statehood.

It’s hard to imagine all that the Logan Oak has seen. It was huge when Ohio’s sixth governor, Thomas Worthington, established the village of Logan in 1816 and even bigger in 1839 when it was incorporated. Scores of people undoubtedly have marveled at the tree through the centuries.

A mature oak can produce 10,000 acorns in a boom year, less in a lean year. As oaks are producing fruit within two or three decades, the Logan Oak has been an acorn factory for nearly five centuries. It likely has produced more than 2 million acorns so far.

As I photographed the tree, several blue jays — migrants, probably — cavorted in its upper boughs. It likely was a jay that planted this tree. Jays are inveterate cachers of acorns, which they bury. Many of these buried fruit are forgotten, thus the birds are avian Johnny Appleseeds of oaks.

Fortunately, interested arborists occasionally collect and grow acorns from the Logan Oak, ensuring that spawn from the mighty plant will continue its venerable legacy.