Glaucous Gull, a sure harbinger of winter 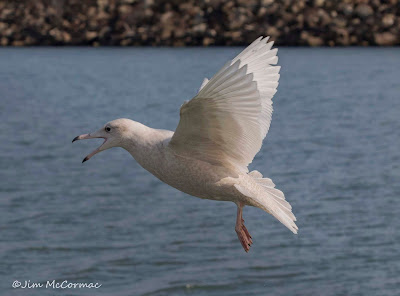 A mammoth glaucous gull yelps its commanding presence to the masses. It's headed into a fray of hundreds of ring-billed gulls and some herring gulls following our boat. Only the great black-backed gull is larger, at least among gulls that appear in Ohio. This glaucous gull will immediately establish primacy among its lesser brethren by sheer force of size and personality.

Last Saturday I boarded the Holiday near downtown Cleveland along with several dozen other birders. It was the first "pelagic" Lake Erie trip of the season sponsored by the Black Swamp Bird Observatory. I believe the December trip is full, but there may be spaces on the January 1 voyage.

We motored slowly down the Cuyahoga River from our launch point at Collision Bend, stopping once to await the passage of the 615-foot lake freighter American Courage. The river seems impossibly narrow to accommodate these giant ships, but it does although lesser craft may have to duck out of the way until they squeak past. 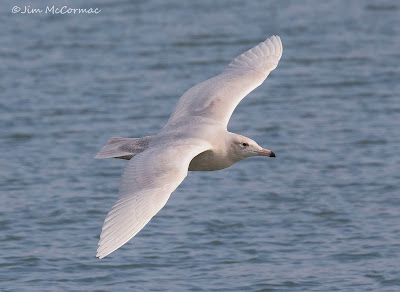 The same glaucous gull from a different angle, showing its pure frosty-white wing tips. This individual is a first-cycle bird. It will go through four cycles of distinct plumage before reaching adulthood at four to five years of age.

Before long we hit Lake Erie. Chum-master Tim Jasinski created a steady effluvia of bird-friendly chum (no popcorn or bread here!) off the stern, and before long we had a blizzard of ring-billed gulls in tow. As the weather has been relatively mild thus far, the ring-billeds were far and away the dominant gull, although a number of herring gulls peppered the flock. Bonaparte's gulls were almost non-existent, and every lake birder loves to encounter swirling masses of that species. Such swarms can attract rarer species such as black-headed or little gulls, or perhaps even a jaeger.

We did see a few great black-backed gulls - another species that will greatly increase in numbers as winter sets in - but this glaucous gull was the highlight. They breed in the high Arctic, and Lake Erie is a Floridian vacation for these feathered toughs. Most of them winter in colder waters, although some make it all the way to the Gulf Coast.

A few other avian highlights were peregrine falcon, which rocketed by offering a few fairly close passes. A rough-legged hawk passed high overhead; my first of the season. And the day's best rarity was a purple sandpiper, which obliging foraged on mossy rocks of a nearby breakwall.

All in all, an interesting four-hour float.