Yesterday I posted about a newly born white-tailed deer fawn that I found in the backyard. Apparently my yard served as a deer nursery. When I found it, the fawn was absolutely tiny and remained motionless and curled up in deep grass, as newborn deer do.

I was out photographing a very rare plant early this morning, and returned about 10 am. The doe had moved the fawn about 20 feet, to a more sheltered nook. She kept in close proximity to the fawn, and would occasionally sneak about to peek at the neighbors' activities from behind shrubs. Other times, she would rest on the ground near the fawn.

Later, I got into a few hour work jag at the computer, and finally got up to have a look out back. To my surprise, the doe had brought the fawn right up by the house, to an even more shaded and densely vegetated area that's even safer. 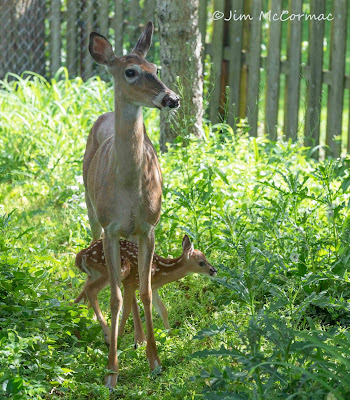 The little one is now walking, albeit somewhat clumsily. It's small enough to walk underneath mom, and also regularly nurses from her. As anyone who knows deer knows, the animals are hyper-vigilant. If I make any sort of movement near a window, she's on me right away. But my presence doesn't seem to bother her much, and doesn't cause her to back off. 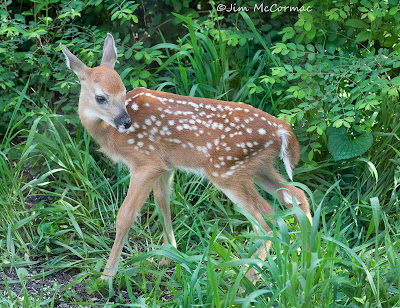 The fawn can hardly contain itself, and makes little frisks around the immediate area of the doe. The youngster looks back over its shoulder here, to make sure where the mother is. The fawn need not worry. Momma doe keeps very close tabs on it. 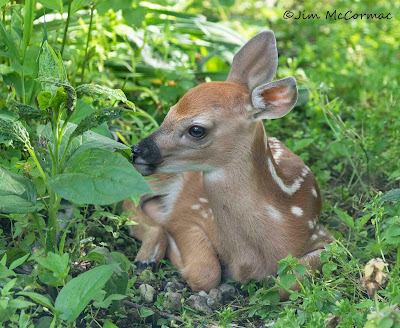 The doe hasn't yet got much stamina, and after a bit of adventuring will plop down for a rest. For longer naps, it retreats into deeper vegetation such as where I originally found it.

I don't know how long this all will go on, but I'll have fun observing while it does.