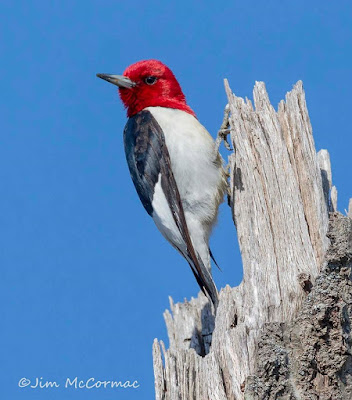 A bird that serves as the catalyst to pique someone’s interest in the feathered world is termed a “spark bird.” The red-headed woodpecker was the spark that launched Alexander Wilson’s career. Wilson was a contemporary of John James Audubon, and has been overshadowed by the much better known frontiersman.

Although Audubon’s bird paintings clearly outshine those of Wilson, the ambitious Scotsman was probably the better ornithologist. His legacy is commemorated by several honorifics such as Wilson’s plover, Wilson’s storm-petrel and Wilson’s warbler.

I suspect he would have traded them all for “Wilson’s woodpecker.”

Small wonder Wilson or anyone else would be captivated by the red-headed woodpecker. Adults are clad in a tuxedo of sorts — bold black and white plumage. But, oh, that head! It appears that the well-named bird wears a hood of fine velvety scarlet.

On May 1, I found myself social distancing in the depths of southern Ohio’s 65,000-acre Shawnee State Forest. As luck would have it, I encountered a very cooperative pair of red-headed woodpeckers in a regenerating clear-cut with scattered snag trees that were tall and dead.

That’s perfect red-head habitat, and the birds were in full courtship mode. There were frequent energetic chases between trees punctuated with loud calls, mutual head-bobbing displays and other evidence of amorous behavior.

Best of all was the “hide-and-seek” game. Each bird would perch opposite of the other on a tree trunk, then slowly hitch around until they spotted each other. Then, quick as a wink, they’d duck out of sight, only to immediately repeat the game.

Red-headed woodpeckers are quite diverse in diet. They’ll frequently grab large flying insects in aerial sorties from tall snags and glean insects from bark. Like other woodpeckers, they use their chisel-like bill to excavate grubs, ants and other goodies from wood.

Most interesting is their fondness for acorns and other mast. Come fall, the red-heads embark on an ambitious agenda of acorn caching. A productive individual might cache hundreds of acorns daily. The birds typically stuff these nuts into tree crevices, and heavily used cache trees are sometimes called “granaries.”

This woodpecker also has a fondness for various soft fruit, and this habitat made it a reviled bird in the early days. The aforementioned Audubon wrote: “I would not recommend to anyone to trust their fruit to the Red-heads; for they not only feed on all kinds as they ripen, but destroy an immense quantity besides. ... I may safely assert, that a hundred have been shot upon a single cherry tree in one day.”

Today, of Ohio’s six widespread breeding woodpecker species, the red-headed is easily the scarcest. There are an estimated 26,000 birds in the state. For comparison, the most common species, the downy woodpecker, has an estimated population of 375,000 birds. The red-heads’ overall uncommonness is tied to its need for open woods with plenty of mast-bearing trees and standing dead snags. Such woodlands are not common these days.

What do you consider the 6 common woodpeckers in Ohio? We have had 5 labeled woodpeckers and the yellow-shafted flicker this year. Which one is not common. (Red bellied, red-headed, downy, hairy, piliated and the flicker)

You've named them all. The northern flicker is a woodpecker. There is another, the yellow-bellied sapsucker, but it is a fairly rare and local breeder in far northeastern Ohio, so I omitted it to avoid confusion.