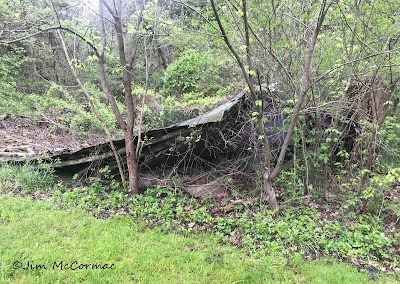 A ramshackle shed, long past its heyday, disintegrates in a scrubby Adams County, Ohio woodland. A friend, Randy Lakes, put me onto this site. A pair of black vultures had made the derelict outbuilding their home, and I wanted to see them and get some images if possible. 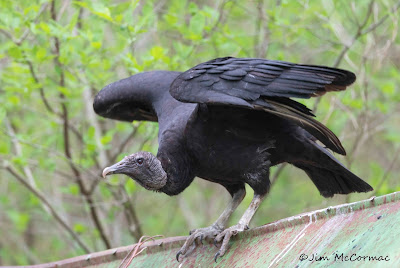 I wasn't far into the vicinity of the collapsed shed when a black vulture emerged. She or he did not go far. It flew to a nearby tree and kept an eye on me. Thus, I hurried through my mission to allow her back into the shed in short order. It was in the shed with its offspring, as adults - both sexes assist - will sometimes brood the chicks for several weeks. 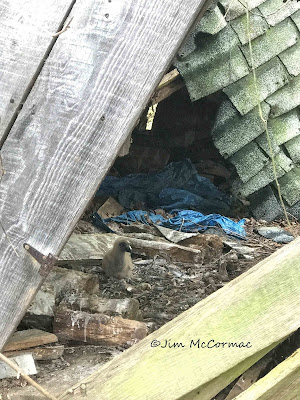 There was one gap between vegetation that allowed a portal into the shed and Voila! There was one black vulture chick, a few weeks old. It's the little grayish lump just left of center, amongst the debris. Black vultures nearly always lay two eggs, and there may have been another chick back amongst the dark recesses, but I only saw this one.

I had brought along a 400mm lens, and that was ample for making photos from well outside the shed. While mom/dad certainly noticed me, the little one paid no heed, and alternated between sitting like a bump on a log, or playing with sticks. 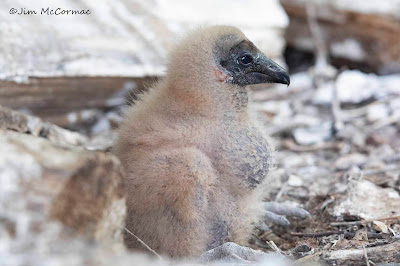 And here's the handsome youth, covered with down and sporting feet nearly as large as the adults. Judging by that bulge, it's well fed.

As adults, black vultures are extremely conspicuous, on the wing, at roosts, and when feasting on dead animals. They're not exactly shrinking violets. Finding an easily observable nest is quite another matter. The majority of black vulture nests are hidden in dense thickets, on the ground, and it'd be very hard to find a view like this with such a nest. I've seen a few nests over the years, and all those were tucked in rocky recesses. You knew the nest was in there, and in one case I could make out the eggs, but they were really impossible to examine. Other commonly used sites are hollows in fallen trees and stumps, and old barns and the like. In parts of South America - this species has a huge range - black vultures commonly nest on skyscrapers and other large buildings.

The black vulture is an extremely adaptable and successful species, and is rapidly spreading north. Up to the 1970/80's, it was a very local bird in Ohio, which is at the northern limits of its range. There were only a few locales one could expect to find them. Now, I wouldn't be surprised to see a black vulture anywhere in the state and the number of colonies around Ohio has increased tremendously. Data from the first Ohio Breeding Bird Atlas (1982-87) and the second Atlas (2006-11) showed a 387% increase in the black vulture population from Atlas I to Atlas II.

I appreciate Randy providing this opportunity to actually see a black vulture chick, and let me learn a bit more about these interesting birds.