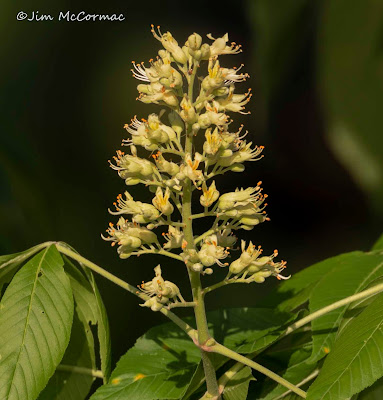 Yesterday morning, at nearly the crack of dawn, I went to a local Columbus greenspot known as Duranceaux Park. It sits along the banks of the Scioto River, and that big stream is a thoroughfare for migrant birds. I'd been hearing all manner of reports from there, and the little park has been heavy with warblers and other songbirds. And birders. In this spring of reduced travel and social distancing, scads of local birders are visiting Duranceaux, and issuing interesting reports.

The light was stellar yesterday morning, and as I rolled into the park about the first thing that I noticed was the conspicuous flowering spikes of Ohio buckeye, Aesculus glabra (above). In the short distance to the parking lot I saw a number of flowering buckeyes, and also saw a photographic opportunity. 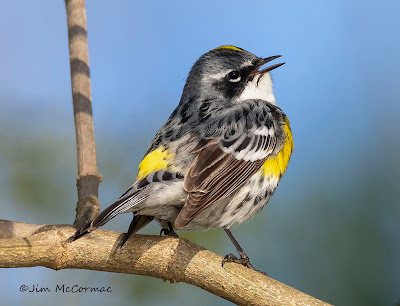 Once on foot, it didn't take long to see that things were moderately birdy. Most frequent were yellow-rumped warblers. This is the most common of the wood-warblers with a total population of nearly 100 million birds. I'm not jaded to the "butterbutts" though - I mean, look at that male above! A case could be made for this species as the most handsome warbler. 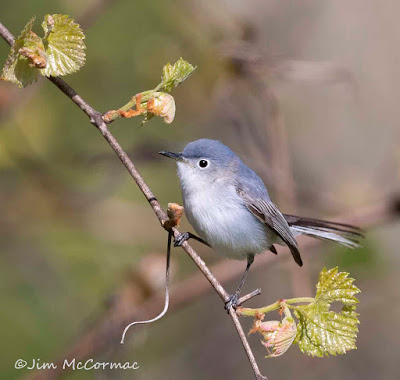 Lots of other migrants were around, including many blue-gray gnatcatchers. I took a photographic swipe at this one, as these high-strung fidgety little songbirds are not particularly easy to shoot well, and my archives are not especially rich in acceptable gnatcatcher photos. The bird finally rewarded my efforts by posing on this grapevine which made for nicely artistic prop. 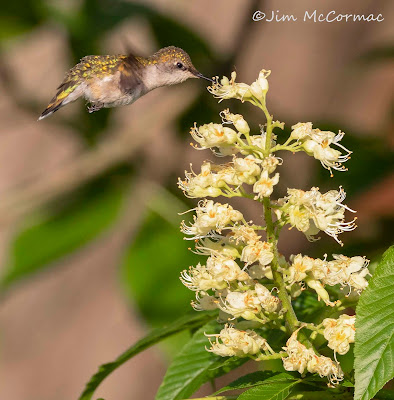 But the flower spikes of the buckeyes kept 90% of my attention. As soon as I saw the buckeyes I thought about ruby-throated hummingbirds. Buckeye flowers are an important early spring nectar source for hummers, but I'd never managed to document this relationship with a camera.

I didn't have to wait long before I heard the squeaky chirps of a hummingbird, and moments later she raced in to the closest buckeye flower spike. She quickly tapped about half the flowers in this spike, then shot off to parts unknown. Nice.

The mistake, photographically, that I made was not putting my flash rig on the camera, knowing there was probably a pretty decent chance of a hummer-buckeye happening. Hummingbirds definitely pop much better with a puff of light, and it allows for much faster shutter speeds to mostly freeze wing movement. As it was, I shot this at 1/500 - fast enough for everything else I was shooting, but not this little speedster. I'm loathe to use super high shutter speeds if it causes the ISO to go sky high, and in this setting it was already at ISO 640 at f/8. Probably should have opened the lens up to f/5.6, jacked the shutter to 1/1000 or more and just rolled with it. But, whatever - the photo still proves that hummingbirds stick their bills in buckeyes. 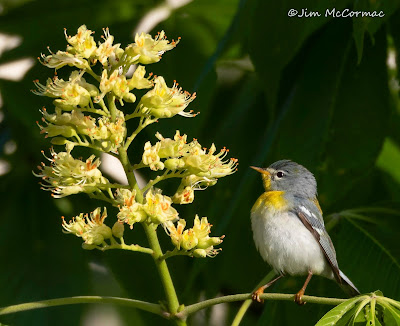 Not long after the hummingbird encounter, I noticed a female northern parula showing interest in buckeye blooms. Here, she appears to critically evaluate the flowers. 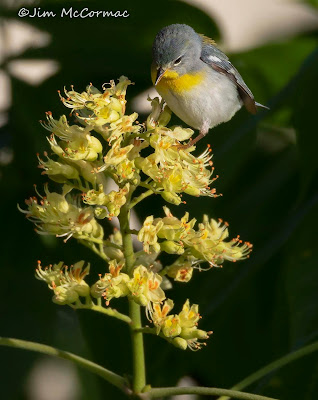 A second later, she jumped into the flower raceme and began probing her thin bill deep into the flowers. Northern parulas are known to take flower nectar, especially on the (largely tropical) wintering grounds. It's been unseasonably cold around here of late, and on this morning the temperature was in the high 30's F when I arrived. The frosty temps and reduced insect availability might be driving increased nectariferous behavior from birds like this parula. 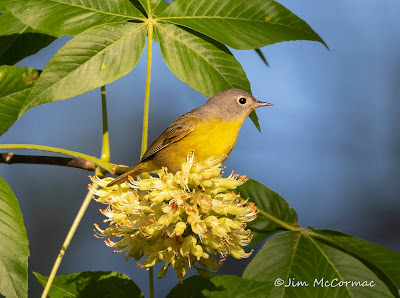 Finally, a short while later I noticed this Nashville warbler flit over to yet some other buckeye flowers. Same old story - into the flowers she went, working them over. This is a well-known nectar feeder, and was the second most common warbler on this day at this site. I'm sure I could have seen more Nashville nectar feeding had I paid closer attention.

I hope to have another crack at this phenomenon before the buckeyes go out of bloom. There are several goals: flash-assisted hummingbird shots, and capturing Cape May warbler, and Baltimore and orchard orioles in the act of plumbing these flowers.