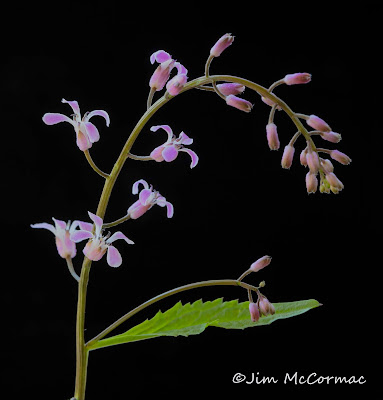 I spent yesterday morning on a privately owned piece of Adams County, Ohio real estate, and birds were the target. There was one very special treat that sent me there, and I managed to capture that species on "film". I'll share that here later. Many other interesting birds were seen and photographed as well. A great day.

Following that, I ducked into a few interesting habitats on the way home to look for plants. One that I was pleased to see is this post's subject: Purple-rocket, Iodanthus pinnatifidus. It's a delicate, moderately sized mustard of rich alluvial floodplains. This was the earliest I'd seen it in bloom, and the photo subject was very much in the act of unfurling. Here in central Ohio, it's more of a June plant.

By the time purple-rocket hits its stride, the companion vegetation on floodplains is lush and robust. Thus, the rocket is often well obscured and can easily be missed. Furthermore, it often occurs as isolated plants or small clusters - not conspicuous colonies. While I'm sure that interesting insects (well, ALL insects are probably interesting) make use of this rocket, and visit it for nectar/pollen, very little seems to be known about its faunal associations.

PHOTO NOTE: Over the years, I have shifted my tactics for plant photography considerably. Much of the sea change is the result of my association with Debbie DiCarlo, with whom I teach photo workshops (at least when viral pandemics are not raging). She's a master of plant photography, and plants are not nearly as easy to portray well as one might think. Whereas I used to use lots of flash on flora, now I rarely do. Flash can impart a harshness that I've come to see as undesirable, although in some situations it can be effective. But when circumstances allow, I've largely cut out artificial lighting and that was the case with this image.

One trick that I learned from Debbie is the black velvet backdrop. Just take a stiff piece of cardboard, roughly 8.5 x 11, and cover it with black velvet. In cluttered situations, you can often prop this backdrop behind your subject - or have someone hold it - and thus isolate the plant. Furthermore, most flora really pops when presented against such a backdrop. When one learns this trick, it's tempting to overplay it, so some restraint should probably be practiced lest all your images begin to look the same. But in the case of this purple-rocket, it was highly effective. It was shot with a tripod-mounted Canon 5DSR and 70-200mm lens at 123mm, coupled with a 25mm extension tube. Settings were f/14, 1/10 of a second, ISO 320, and as stated previously, no flash.

Fantastic shot, and many thanks for the photo tip. I wonder if this could be useful for more than just plants (insects, snakes, frogs?)...

And I cannot wait to see what avian target was the day's quarry!