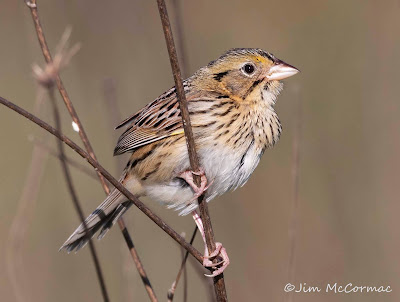 A stunning Henslow's sparrow grasps the withered stalk of last year's Queen Anne's lace, his singing perch. Note the intricate details of this seldom-seen sparrow (at least not often seen by non-birders). Big bill, flat head, huge feet, plumage ornately stippled with dashes and streaks, and a subtle palette of colors: ocher, buffy-yellow, purplish, and a faint olive wash to the head.

I made my annual visit to Tri-Valley Wildlife Area (well, some years 2-3 visits) in Muskingum County, Ohio and this species was high on my list. I knew I would see it, as the large dry meadows there support many. But, as always, I first HEARD the sparrow and therein lies the rub. If one is not clued to their song, the chances of seeing a Henslow's sparrow plummet.

The song is quite charismatic, in my view, but could easily be overlooked. Indeed, to someone unfamiliar with it, the short aria might well be thought to be a cricket or some other insect. It's an explosive little chirp that is said to last about 3/5th's of a second. I'd say that's about the right duration. My Canon 5D IV, somewhat turbocharged by its auxiliary battery pack, can crank off about 8 frames a second. If I hold the trigger down on burst mode for the duration of the Henslow's song, I'll get maybe three or four images of the bird is some phase of delivering the song. 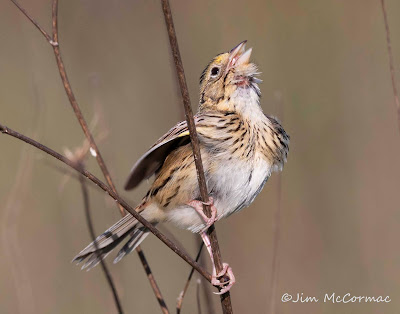 The little fellow in full throated song. It's like an aural explosion and don't blink or you'll miss it. The male rapidly throws his head back, puffs his wings, raises his throat feathers, quivers his tail, and issues a faint t-slik! While it all passes quickly to our ears, the birds probably hear something quite different. If you slow a recording of a Henslow's sparrow song down by 50% or more, numerous trills and flourishes become evident. The complexity is clearly far greater than our hearing can capture, and it offers a window into the differences between bird hearing and our own.

As far as photography goes, with some advance knowledge of the species I find Henslow's sparrows to be quite easy subjects. The way that I got onto this one is typical, for me at least. I heard him fairly near the road while slowly cruising with the windows down. A bit of scanning with the binoculars and I picked him up. In this case, the sun - it was very early morning - was right behind the bird. So, tripod and big rig in hand, I circled out into the meadow and around until the bird was in the golden light, and moved in. If one is quiet and somewhat stealthy in their movements, these sparrows can be incredibly tame. Sure enough, I eventually got to within 20 feet or so of the singer, photographed and video'd him for about ten minutes, and when I got back to the Jeep it was still sitting there singing.

Here's a brief video of the same bird in the images above singing. You can draw your own conclusions about the vivacity of its song.

Data from the Ohio Breeding Bird Atlas II (field work from 2006-11) suggests there are about 11,500 singing males, and that figure probably has not changed significantly since. The majority of the birds now occur on old "reclaimed" strip mine lands in southeastern Ohio. Tri-Valley Wildlife Area is such a site, and in total there could be as much as 250,000 acres of reclamation grasslands in the southeastern hill country. While strip mining was - and is - one of the greatest ecological catastrophes perpetrated in North America, the use of post-mining habitats by grassland species such as Henslow's sparrow has been an unexpected positive effect.

Great article Jim! Your point on the sparrow's song and being more complex than than the human ear can capture has now effectively blown my mind!