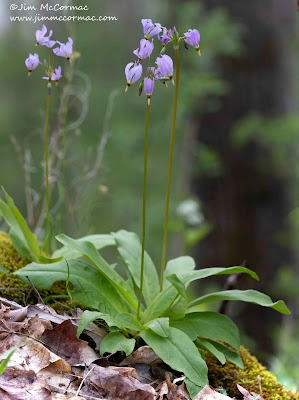 Without doubt one of our showiest spring wildflowers is Shooting-star, Dodecatheon meadia. This limestone cliff summit was fringed with many plants.

I made a morning foray down to Miller Nature Sanctuary in Highland County, Ohio, along with my brother Mike and his wife Patrice. This 85-acre site is exceptionally rich in wildflowers, and the cast of botanical characters is headlined by the gorgeous Shooting-stars, which are frequent there.

TAXONOMIC NOTE: Work done in 2007 shifted plants in the genus Dodecatheon to genus Primula. This seems reasonable and if adopted the species featured in this blog post would be addressed as Primula meadia. However, as virtually all references to this plant refer to Dodecatheon, I retain that name for this post.

PHOTOGRAPHY NOTE: I recently got a Canon 6D II, and all of these shots were made with that camera. It replaced my 5DSR, which I had had for some time and pretty much burned up with several hundred thousand shots over the years. Part of the reason for choosing the 6D is it is the only Canon full-frame camera with an articulating back screen. Having the ability to fold the screen out makes seeing the subject much easier when the camera is placed near the ground or in other awkward places. I've had ample opportunity to work with it, and love the camera and its image quality. It's a big jump in evolution from the original 6D.

Three of the four images in this post were shot with Canon's superb 70-200mm f/2.8 II lens. Over the last several years, I've come to increasingly rely on this lens for plant photography. It imparts a wonderful bokeh (background blur), and the zoom allows easy versatility in composition. I often use the lens in conjunction with a 25mm extension tube, which reduces its minimum focus distance. The last shot was made with the Canon 16-35mm f/2.8 II ultra-wide angle lens. It too can be incredibly useful for plant photography. When using a wide-angle for flora shots, it's important to get some anchor subject REALLY close to the lens as a focal point for the entry into the image. The nearest shooting-star flowers in that last image are only a few inches from the camera lens. 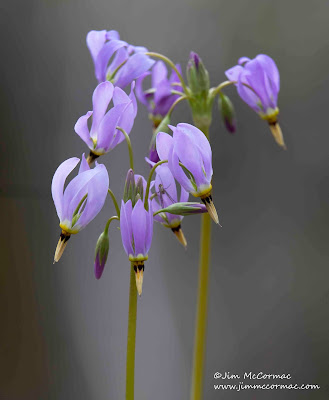 Shooting-star is not a common plant in Ohio, but populations have been found in 24 counties. Many of those records are old and the populations long gone, though. Because of its fidelity to a narrow habitat niche, Shooting-star populations tend to be widely scattered and local.
One great thing about the Shooting-stars at Miller is that many or most of the flowers are of this exquisite rose-purple form. In many areas the flowers are white. Those look good too, but definitely lack the panache of the purplish flowers. Whatever their color, the flowers are pollinated primarily by bumblebees, using "buzz pollination". By rapidly vibrating their thoracic muscles, the bees cause the pollen to fall from the flowers and onto the bee. 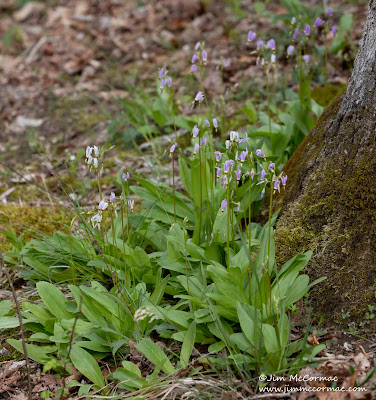 A Shooting-star colony forms a ring around the trunk of an oak. Some pure white flowers are mixed in. I wonder if arboreal ants hauled the tiny seeds to a nest in the tree, resulting in this formation. Generally wind is the accepted seed dispersal mechanism. Gusts can blow the seeds some distance from the capsules. But ants also play an enormous role in seed dispersal of many spring wildflowers, and may assist in the migration of this species as well. 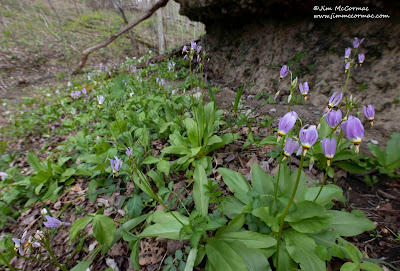 This colony is right along the main hiking trail at Miller Nature Sanctuary and cannot be missed. It is in a classic situation for many Ohio populations of this species: thin soil over limestone bedrock. A small limestone cliff shelters the population.
The Shooting-star was not quite peak this morning, and should be looking fine for another week or so. It's well worth the trip to see it. Scads of other wildflowers as well. I think we jotted down the names of several dozen species that we observed.
at April 23, 2021