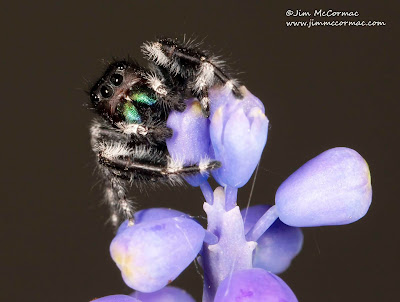 A Bold Jumping Spider, Phidippus audax, gazes at the photographer from atop a showy perch of Grape Hyacinth flowers. Its belay line can be seen among the flowers to the right. If threatened, the spider will leap into space, using the line to arrest its free-fall.

I caught the little fellow inside my Jeep while cleaning it the other day, and retained him for photos. These are fantastic little spiders, and often common around dwellings. They are loaded with charisma, and will carefully watch people, shifting position to better keep an eye(s) on us. I went out back and plucked a sprig of Grape Hyacinth, thinking it might make a showy contrast to the spider. After coaxing it onto my finger tip, I placed it on the flower stem, figuring it would climb upwards, which it did. After summiting, the little jumper spent some time taking in the view from its lofty vantage point. It turned and paused, turned and paused, looking in all directions, all the while allowing me some shots. The Canon 6D II, 100mm macro lens, and Canon Twin-Lite flashes did a fine job of capturing the arachnid.

After the photo shoot, I liberated the spider into my sunroom, where I regularly find jumpers. It's too cold to release him outside, with nighttime temps plummeting into the 30's of late. Not that it wouldn't survive that, but I thought I'd give him a break.