Today was picture-perfect for blending avian and botanical photography. I headed down to a Hocking Hills hotspot, only an hour distant, and arrived early in the morning. The skies were sunny, and presented ideal conditions for bird shooting.

A Northern Parula sings from an old apple tree. He went from blossom to blossom, plucking hapless pollinating insects, singing all the while. This is our smallest warbler (in the east) and one of the first to return in spring. A pair of Louisiana Waterthrush were nearby, as was a Yellow-throated Warbler. A Pine Warbler sang from mature Virginia Pines atop the ridge, a Black-and-white Warbler sang its lipsy squeak of a song from mature hardwoods, and a distant Black-throated Green Warbler occasionally issued its wheezy song.
After about two hours, clouds rolled in from the west. It was time to head into the woods and a riot of trillium. Shady conditions - especially during light showers or better, right after a rain, are fantastic for shooting flora. 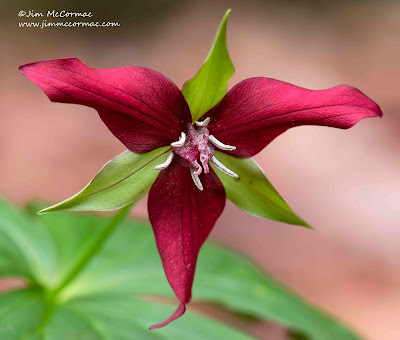 Without doubt, Red Trillium, Trillium erectum, is one of our most striking woodland wildflowers. But what do you call a white-flowered "red" trillium (see next photo)? While red forms dominated at this site, there were plenty of white-flowered forms, grading insensibly into cream, yellowish, even greenish and even pinkish-tinged flower types. This statuesque plant goes by a number of other names: Purple Trillium, Wakerobin, Bethroot, Ill-scented Trillium, Stinking Benjamin. I refuse to call such a gorgeous plant by the latter two names. 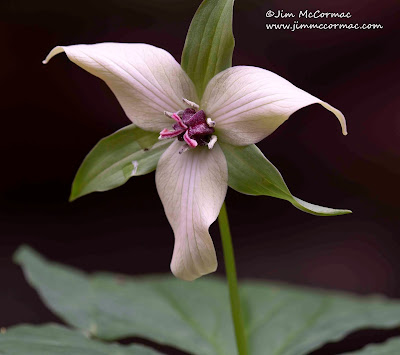 A cream-colored form, with faint purplish tinting to the petals. It has been called forma albiflorum, but these color forms intergrade somewhat. No matter what you call them, Trillium erectum and its varied flowers is a spectacular species.
at April 11, 2021

What a beautiful bird. I have never seen one.

You did all this on my birth day.