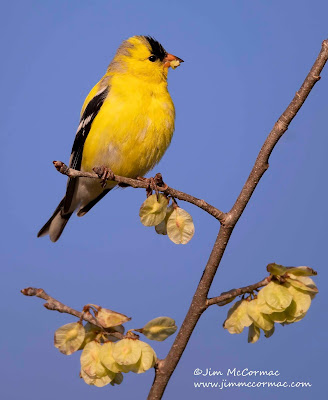 I got out for a few hours this morning to shoot birds, and visited a decent little local patch in Delaware County along the Scioto River. The American Goldfinches were conspicuous, and the males had mostly molted into their handsome yellow summer coats.

These males fairly bubbled over with song as they enthusiastically gamboled about, singing on the wing and from perches. I kept half an eye on them as I pursued various other quarry, and was pleased when this chap alit near the top of an American Elm sapling. In between bouts of song, he would pluck elm samaras (seeds) and crunch them down. 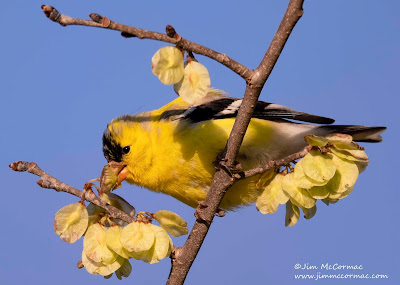 I quickly panned the camera to the goldfinch in the hopes of documenting not only one of our most beautiful birds, but to catch him in the act of samara-eating. And here he is, having just plucked one.
American Goldfinches are probably the closest thing to a feathered vegan in our neck of the woods. They will opportunistically take the occasional insect, but the overwhelming majority of their diet is vegetable matter. Even the nestlings are fed a regurgitated semi-glutinous gruel of partially digested plant matter.
Even though Brown-headed Cowbirds regularly parasitize goldfinch nests, the cowbirds chicks usually perish within three days. This near 100% mortality rate is apparently due to the lack of protein in the goldfinch's plant-based diet. Cowbird chicks, and those of nearly all of our songbirds, require ample protein in the form of insect-based diets.
Not so the interesting American Goldfinch, which bucks the dominant songbird dietary paradigm.
at April 26, 2021

Really enjoyed this info...thanks for sharing!