Nature: In a 24-hour period, 18 species of amphibians were documented during a recent search 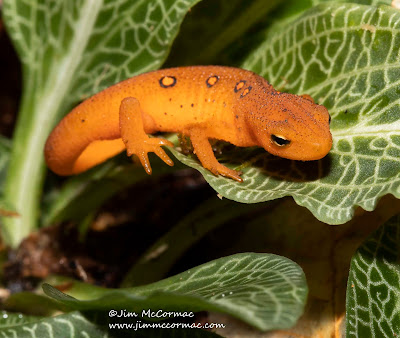 Nature: In a 24-hour period, 18 species of amphibians were documented during a recent search

Columbus Dispatch
April 18, 2021
NATURE
Jim McCormac
Double, double toil and trouble;
Fire burn and caldron bubble.
Fillet of a fenny snake,
In the caldron boil and bake;
Eye of newt and toe of frog…
--William Shakespeare
On March 30, along with friends John Howard and Kelly Capuzzi, I embarked on what many might consider an odd quest: finding as many amphibian species as possible in 24 hours.

I couldn’t have had better partners. Kelly is an aquatic biologist, energetic afield, with intense curiosity about natural history. John lives in Adams County and is a walking encyclopedia of flora and fauna. I have mentioned him in numerous previous columns.

A day passes quickly and we had to focus on the most amphibian-rich region of the state. This was a no-brainer: Adams County, with forays into adjacent Brown and Scioto counties.

Thirty-seven species of frogs, toads, and salamanders have been recorded in Ohio. It would be impossible to find them all in a day, due to geographic separation. But our region allowed the possibility of locating 32 species.

We convened at Howard’s house, and at 11 am set out on what would be a whirlwind 24 hours of amphibianizing.

Our first stop was an isolated hollow in Adams County where we turned up northern dusky and slimy salamanders. The latter is well-named. Its skin exudes super glue-like secretions to deter predators. Wood frog eggs in a small pool added to the list.

Dredging through the mire of a Scioto County spring yielded a couple of red salamanders and our first green frog. Salamander-seeking in particular is slow hard work that requires looking under numerous logs and rocks.

We returned to Howard’s house around 9 pm, and drummed up some marbled salamanders in his pond. Following a well-deserved meal, we took a brief nap and headed back out at 1 am.

While the day’s weather had been mostly sunny and in the 70’s, what we really hoped for rolled in that night: rain. Warm wet nights in spring really get the amphibians moving as they seek mates or migrate to breeding sites.

Cruising backwoods lanes in Scioto County offered up scads of amphibians, including hundreds of America toads, pickerel frogs, spring peepers, our first bullfrog, and many others. We moved plenty off the roads. Roaming amphibians are frequently flattened by vehicles.

About 4 am, we decided to head to a large marsh in Brown County. That was a good decision as we netted northern leopard frog and western chorus frog.

At 11 am, our 24 hours was up. The last amphibian found was a red eft – the larval form of the red-spotted newt – pictured with this column. We had spent 21 hours afield, and found 18 species. Nineteen, if we counted a ravine salamander that Howard had found a few days prior and temporarily detained.

We plan on doing this next spring, and think with minor tweaks we will eclipse 20 species.

Naturalist Jim McCormac writes a column for The Dispatch on the first, third and fifth Sundays of the month. He also writes about nature at www.jimmccormac.blogspot.com.
at April 18, 2021

Email ThisBlogThis!Share to TwitterShare to FacebookShare to Pinterest
Labels: amphibians

I sure wish I could've tagged along, Jim.

I lack the stamina for such an expedition, but what fun it must have been. Envious.