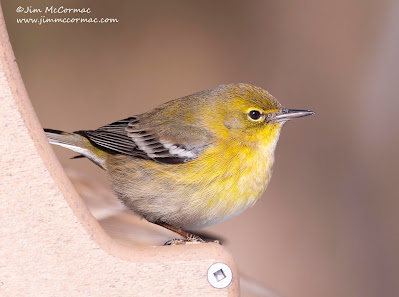 This Pine Warbler has spent the winter, thus far, at Green Lawn Cemetery on the south side of Columbus, Ohio. As fate would have it, I had a meeting only ten minutes from there yesterday, and stopped by afterwards to do some February warbler-watching in crisp mid-20's F temperatures.

Pine Warblers are second only to the Yellow-rumped Warbler in regards to winter hardiness. Virtually the entire population winters in the U.S., although the majority of birds retreat to the deep south in winter. The numbers of Pine Warblers in a Florida pine woods can be staggering. There, they often feed on seeds of native grasses, such as panic grasses in the genus Dicanthelium. So heavy is their browsing on grass seeds, from my observations, that I wonder if these warblers aren't fairly major agents of dispersal for grasses.

Columbus, Ohio, is near the northern limits of where one might have expectations of stumbling into a wintering Pine Warbler. They are not averse to capitalizing on feeders, and that's what this one was doing. It would take regular seeds, and also suet. While Pine Warblers do not apparently winter at this cemetery every year, they have in the past on a number of occasions.

In the hill country of southern/southeastern Ohio, Pine Warblers are more regular in winter. There, they frequent older stands of native Virginia Pine (Pinus virginiana) and Pitch Pine (P. rigida). As in Florida and elsewhere in the south, I have seen Ohio wintering birds working over panic grasses for seeds.

Cool as seeing the Pine Warbler was, I was primarily after a FAR scarcer winter warbler: a male Black-throated Blue Warbler. There are very few winter records in Ohio, but this fellow was found a week or so ago in Green Lawn Cemetery, and has been seen sporadically since. Try as I might, I could not locate it yesterday. Had I done so, I surely would have scoured around to try and drum up a Yellow-rumped Warbler, as surely some were about (this is our only commonly wintering warbler). That would have resulted in a three-warbler February day in Central Ohio - not something to be expected. I hear there is a Palm Warbler hanging out in Knox County, too, so at least four warbler species are in the Buckeye State.