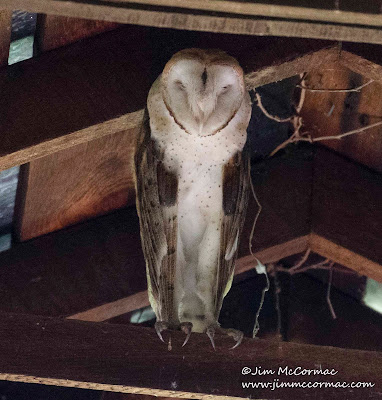 Columbus Dispatch
February 7, 2021
NATURE
Jim McCormac
In the bird world, owls rank high among our imperfectly understood avifauna. Most species are strictly nocturnal, and they are adept in the art of camouflage. Sometimes one lucks into a roosting owl, but the vast majority remain undetected. They tend to be heard more than seen.

The most common breeding owl in Ohio is the eastern screech owl. Most people reading this live in close proximity to this secretive species but probably don’t know it. Participants in the 1981 Toledo Christmas Bird Count made a special effort to ferret out this species. They found a remarkable 112 birds within the count’s 15-mile circle, illuminating the true abundance of this mysterious species.

Gaining a better understanding of Ohio’s owls is a goal of Ohio Dominican University ornithologist Blake Mathys. Last fall, he launched the Central Ohio Owl Project. His research actually extends beyond the title, as Mathys will accept owl reports from anywhere in the state.

As the university and Blake are here in Central Ohio, that’s where the majority of owl reports are received. The project is off to a flying start, with about 1,300 records collected so far.

The “Big Three” resident Ohio owls are barred owl, the aforementioned screech owl and the great horned owl. This trio represents by far the majority of the state’s owls, and they occur in every county, often commonly. Mathys wants reports of these species, but is prioritizing research on a much scarcer parliament of owls: the barn, long-eared and northern saw-whet owls.

Well-named barn owls are prone to roosting in their namesake structures, silos or old abandoned buildings. I’m sure more than a few farmers come across barn owls, and Mathys would love to hear about them.

The northern saw-whet owl and long-eared owl are primarily migrants and winter visitors in Ohio. These two are strictly nocturnal and typically roost in dense evergreens, grape tangles or thick brush during the day. Habitual roost sites are sometime given away by streaks of “whitewash” below. I remember a saw-whet owl that wintered near Columbus years ago. It roosted in a dense cedar over some bee hives. The owner noticed an increasing amount of bird poop staining his hives, and looked up into the tree to see an owl staring back.

Long-eared owls take camouflage to remarkable levels. At rest, they resemble plump little great horned owls, their ear tufts sometimes flopped down like a basset hound. When perceived threats are nearby, the owl will stand stiff, pull its feathers in and erect its ear tufts. The resemblance to a broken-off branch is uncanny.

In recent weeks, Mathys has verified two reports of long-eared owls roosting in ornamental spruce trees within close proximity of houses. This owl can be colonial, and roosts of up to 20 birds have been found in Ohio.

The Central Ohio Owl Project is slated to continue for the next several years. Mathys’ end game is to develop a clearer picture of the status and distribution of owls, and he is also gathering data on diet. Owls vomit indigestible fur and bone of victims in the form of compact pellets, which can often be found under roosts. Dissecting and analyzing pellet contents reveals prey choices.

Let’s deluge Mathys with owl reports. He would be most appreciative. The more we learn about our owls, the better we can conserve these charismatic animals. All reports will be kept strictly confidential.

For more information on the Central Ohio Owl Project, including how to report owls, visit: https://www.ohiodominican.edu/owlproject. Or email Blake Mathys at: mathysb@ohiodominican.edu

Naturalist Jim McCormac writes a column for The Dispatch on the first, third and fifth Sundays of the month. He also writes about nature at www.jimmccormac.blogspot.com
at February 09, 2021

A male Blue-winged Warbler along the Black River in Cheboygan County, Michigan on May 19, 2021. I heard the bird singing, and eventually m...