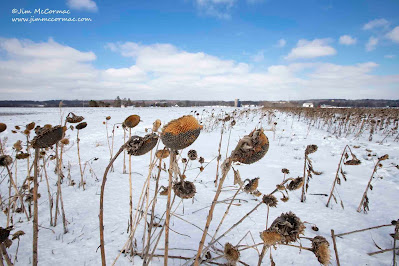 A roughly ten acre patch of Common Sunflowers (Helianthus annuus) stretches into the distance. It's planted there courtesy of Soltis Farms. Some of their buildings can be see in the distance. The seedy patch is a a gargantuan bird feeder, as is the open field to the left. They've spread cow manure on that, and manure is loaded with vegetable matter that open country birds such as Horned Larks, Lapland Longspurs, and Snow Buntings find irresistible. That field is loaded with all three.

This bird-rich field is along Soltis Road in Geauga County, and the farm's operators have made it readily accessible to birders. I had been hearing about this place for a while, and finally visited on the morning of February 14. The experience was amazing. I wish I knew more about Soltis Farms, and why this bird-friendly ag field came to be. They've obviously been part of the local community for a long time, to have a road named for them. Anyway, I and scores of others are very grateful to them for their generosity. 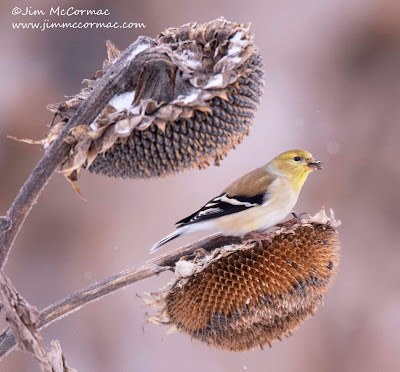 Immediately upon arrival, I was greeted by platoons of buntings, larks and longspurs along the road, and swirling over the open field. After ogling those for a bit, I headed into the field and nippy 14 F cold. My main target was in the sunflower field, time was limited, so the seedy crop and its denizens was my focus.

Unsurprisingly, America Goldfinches were frequenting the field and I saw and heard them instantly. Here, a male plucks seeds from a sunflower head. 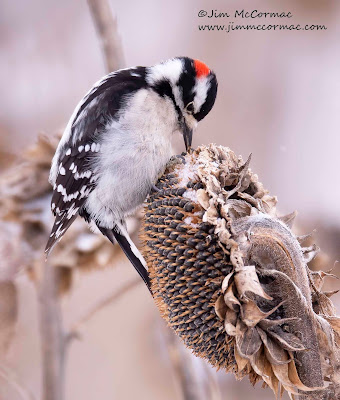 I had seen and heard flocks of my target bird at the far end of the field, and struck out along the edge of the sunflowers. Eventually I reached a spot with plenty of nice fruit-laden plants, in good light, and with a number of superbly sited sunflower plants that would offer perfect stages for photography, if and when birds landed on them. Then I settled in for what would be nearly three hours in that spot, letting subjects come to me. Including this industrious Downy Woodpecker. This is the smartest, hardest working animal in the timber industry, and they are fast to recognize new non-tree feeding opportunities. The male Downy spent quite a while plucking seeds from this plant. This sunflower head alone would keep him busy for a long time. One head of Helianthus annuus can easily produce 1,000 seeds. And I would not even begin to estimate how many plants were in this field. 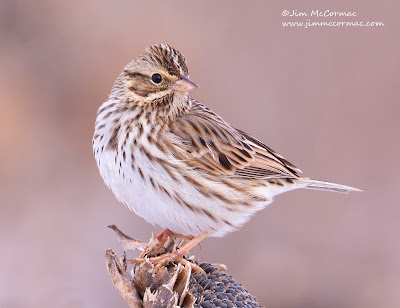 At one point, I heard the light, wispy call note of a Savannah Sparrow. A slight bit of pishing stimulated it to pop up on a nearby sunflower, allowing me some documentary shots. I normally think of this as a rather half-hardy sparrow, and rare in winter. Bruce Peterjohn, in his The Birds of Ohio (2001), notes that they were "...once considered accidental winter visitors..." but goes on to note that wintering birds are probably overlooked. While I agree with that - winter Savannah Sparrows mostly stay on the ground, in cover, and their calls are tough to hear or recognize - I do wonder if they aren't truly increasing in winter. There have been more reports this winter from around the state than perhaps any other winter, and other recent winters also seem to be producing above average records. Ohio is essentially at the northern limits of this species' wintering range, and perhaps they are shifting northward. 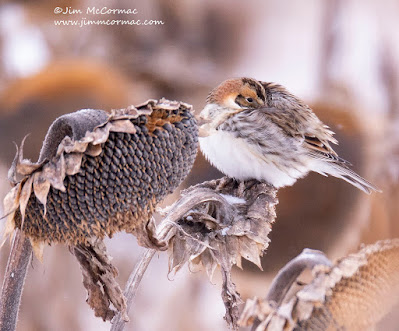 A Lapland Longspur dozes atop a sunflower. This is something you won't see every day. Interestingly, longspurs and Snow Buntings would regularly enter the sunflower patch from their more typical habitat - the open field next door - to plunder seed. I'd never seen nor heard of this behavior from these tundra-breeders. 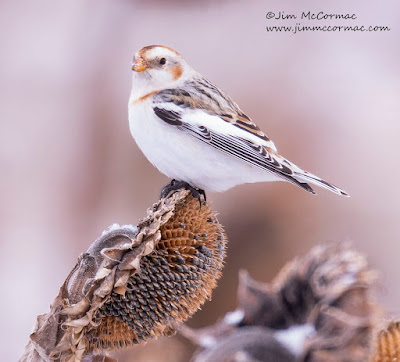 A stunning Snow Bunting rests atop a sunflower. It was part of a large group of longspurs and buntings that regularly entered the field to pluck seeds, and even more so, walk around the bases of plants harvesting fallen fruit. 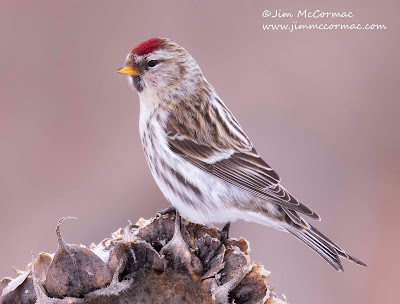 Ah! This is was my primary quarry, the Common Redpoll. This female was part of a flock that numbered perhaps 200 birds. Redpolls breed in the far north, into open tundra, and are rare this far south. Most winters there are few reports in Ohio, but this has been a good year for them, especially in the northern part of the state. Nonetheless, there aren't many places around here one can go and reliably see a flock this size. 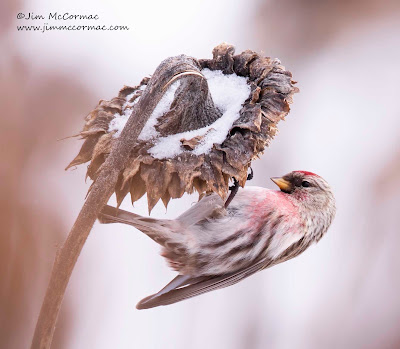 A male redpoll dangles acrobatically from a sunflower. They are pretty tame, and I found the best strategy was to just pick a good spot, and let the birds come to me. And that they did. The sunflower patch is very long, but narrow, and the birds would sort of roll down its length in a big cacophonous finchy wave. By remaining motionless on the edge of the field, they seemed to pay me little mind and many came within easy distance of my camera rig. 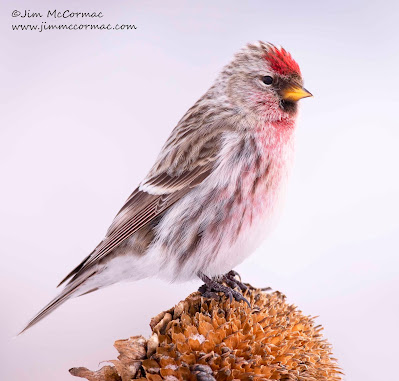 A beautiful male Common Redpoll, its breast suffused with pink and sporting the namesake redpoll, or cap. He sits atop a sunflower that has mostly been picked clean, at least at the summit. The birds take the easy seeds from atop the plant first, then have to resort to hanging acrobatically like the bird in the previous image to get at remaining fruit. 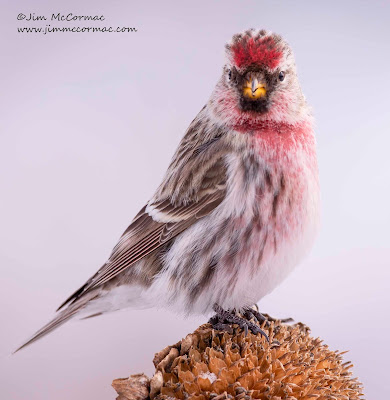 It was a wonderful morning spent working with the redpolls. They are most entertaining to watch, especially when for no apparent reason the flock would rise en masse and swirl high in the air. After much calling, chasing, and flurrying about, they would settle back down to recommence their attack on the sunflowers.
Thanks again to Soltis Farms for this opportunity.
at February 17, 2021

Where exactly is Soltis Farms and where would you park if one were to visit?

Corner of Soltis Road and State Rte. 88, just south of Parkman. Can park along Soltis Road