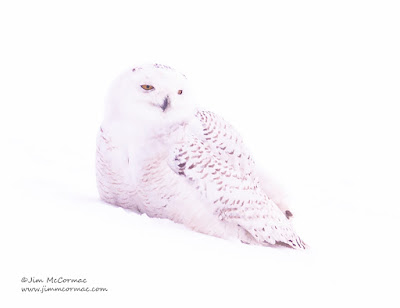 I sorely needed a field foray yesterday. However, the weather was not overly alluring. Temperatures were in the low teens when I set out, skies were gray, and a stiff wind blew from the north. Seemingly not great conditions for photography. Fortunately for me, photography is only part of the equation. I am just as happy watching and observing.

I first visited the huge dam at Alum Creek Reservoir in Delaware County, Ohio - not far from home. I was there to pay a visit to the magnificent Snowy Owl that has been there all winter, to the delight of thousands - no exaggeration - of people who have seen it.

Like people, Snowy Owls have distinct personalities and I have seen ones that won't tolerate anyone near them. Others, like this girl, seemingly could care less about people. This one has chosen by far the busiest locale in this sprawling state park to call its winter home. Scores of people walk, run, cross-country ski and bird here, every day, in close proximity to the owl. There is even a busy remote-controlled airplane airfield here! It cares not a whit. And food must be abundant. I personally am quite glad it chose this spot, as so many people have gotten to see this majestic Arctic bird firsthand, the vast majority for the first time. Including many kids. I'd bet the Alum owl might have created more than a few birders, and future biologists.

Anyway, when I arrived the owl was not evident, but I quickly saw a largish flock of Horned Larks, Lapland Longspurs, and Snow Buntings swirling about the top of the dam's long grassy slope. I made the ascent, splayed my tripod out to ground level, lay behind the rig, and let the birds come to me. Soon, like gulls on the beach, the birds were close at hand and at times all around me. After a bit, I sidled over to look down the hill, and there was the Snowy Owl, part way down the hill and looking supreme in a blanket of powdery snow. 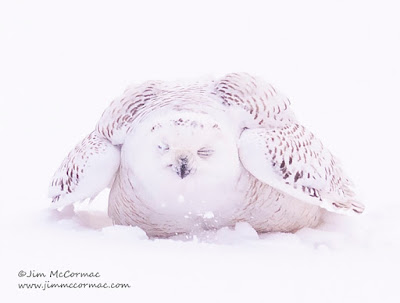 In short order, it began to snow-bathe, something I had never seen this species do. She would thrust her head under the snow, throw powder over her body with her wings, and occasionally shake and fluff. That's what she's doing in the image above.
Pleased with how things went down at Alum Creek, I decided to press northward, to a spot that can be good for Short-eared Owls. 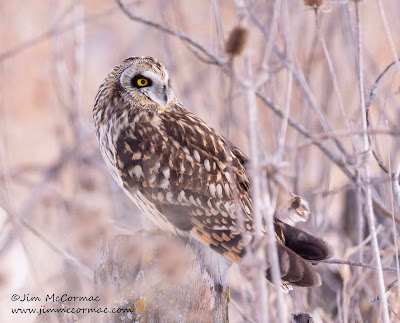 I was not disappointed. While still a quarter mile or more from ground zero, I saw five or six owls swirling high in the air. Even though it was noon. The presence of a Bald Eagle flying away suggested that the larger raptor had put the owls up.
The Short-ears soon returned to earth, and settled in. The one above chose a stump in brush, near the road. By using the car as a blind, I could pause nearby without bothering the animals. This one, its head on a swivel, paid me no mind and I enjoyed watching its keen alertness. Even though the middle of the day, if a vole or mouse foolishly showed itself, the owl probably would have pounced. 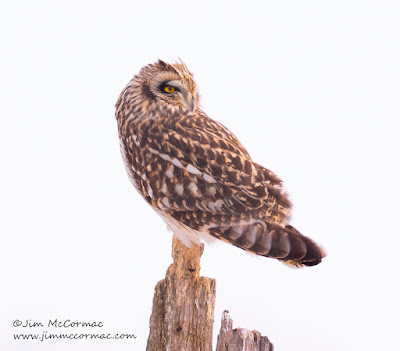 A fierce-looking Short-eared Owl monitors its surroundings from atop an old snag. I especially loved stumbling into this bird, as he had chosen an especially aesthetic perch. 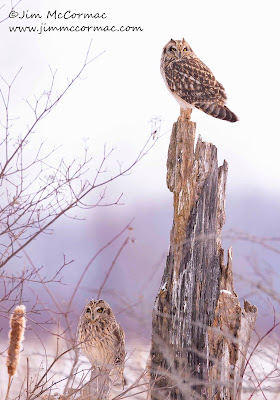 I came by the perch later, and another owl was sitting just below! That's pretty buddy-buddy for these fairly anti-social owls, and I think the one above is a male, and the other a female. Female Short-eared Owls tend to be darker and buffier, and that's how she looked to me.
The area that I saw these owls - seven in all - is smack in the midst of the Sandusky Plains prairie. This huge prairie system has nearly been eradicated by agriculture, and the few spots that survive are important refugia for prairie denizens such as Short-eared Owls. Given their numbers this winter at this place and other nearby spots, one must suspect that Meadow Voles (Microtus pennsylvanicus) are having a boom year. Maybe other rodents as well. Voles, especially, seem to drive wintering raptor numbers in the Midwest.
Sometimes following a major vole eruption, Short-eared Owls - and Northern Harriers - will remain to nest. Maybe the pair in the photo above. They typically form pair bonds in late winter. Part of this includes incredible "sky dancing" flight displays replete with booming hoots and loud wing claps. I saw none of that yesterday, but will be watching for such behavior on future visits.

Beautiful images! Thanks for the post, Mr McCormac--I check your blog every day hoping for a new learning experience.

we have a bumper crop of short eareds this year and a week or so ago two of them were
flying around and barking at each other - how can I distinguish courtship displays from rivalry? I thought this was the latter because there was nothing too affectionate about it- seemed more like trying to dominate perches and establish a territory.

great- thanks- have not seen that