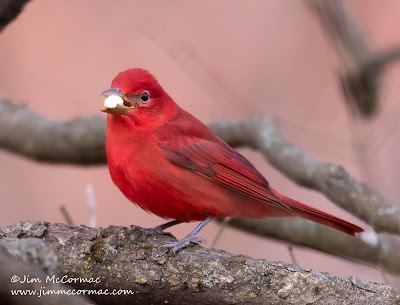 In winter, birders can expect to see only one of these flashy species: our state bird, the northern cardinal. The other five species migrate to tropical haunts from the Caribbean and Mexico to South America.

Thus, I was excited to receive an email from Bill Wood on January 2. He and his wife had been seeing a summer tanager visiting the feeders at their Franklin County home for several days. Summer tanagers breed locally in Ohio and are not too tough to find during their namesake season, but winter records are almost unheard of. Most of them travel to southern Central America and South America.

Bill was kind enough to allow me to visit and photograph the bird. It appeared minutes after my arrival, a brilliant jolt of red among the leafless trees and drab winter landscape. It was an adult male sporting plumage even redder than the nearby cardinals. The tanager continues to grace Bill’s neighborhood, as of this writing.

A wonky but necessary note: summer tanager and many other species until recently were placed in the huge mostly tropical tanager family (Thraupidae). In recent years molecular research has shown that many “tanagers” and allies are more closely related to other groups of birds, and these species have reclassified accordingly. Thus the summer tanager is now in the cardinal family.

Why would a summer tanager be in Central Ohio during a cold snowy winter? I do not know. But there it was, feasting on shelled peanuts and other nutty fare. Between Bill’s feeders and those of neighbors, the bird had many entrees from which to choose.

Normal summer tanager fare is far more specialized than bird seed. They feed primarily on bees and wasps. Nothing, no matter the ferocity of its sting, is off-limits. From honey bees to bald-faced hornets, the tanager is a feathered Jack the Ripper. It seizes its venomous prey in flight, and then beats its victim violently against a branch. A few deft swipes removes the stinger, then the tanager swallows its meal.

A real treat of this atypical birding experience was meeting Bill. He is the editor of a storied magazine in the two-wheeled world, The Antique Motorcycle. In between the tanager’s visits, we discussed everything from flat-track racing to early vintage bikes to Harley-Davidsons. Bill is a walking encyclopedia of motorcycles.

About the same time that birds captured my fancy as a kid, so too did motorcycles. Starting with minibikes, then my first “real” motorcycle, the legendary Honda CR 125M Elsinore, I have rarely been bikeless. The twain of biker and birder seldom meets, making this trip especially noteworthy.

Capping the visit was a look at Bill’s elegant 1990 Honda GB500 “Tourist Trophy”. The machine is art on wheels, and only about 3,500 were made. It is almost as rare as a summer tanager in an Ohio winter and was nearly as exciting to see. An old BMW R75/5 was also in his collection – one of the first bikes to feature an electric starter.

Keep an eye on your feeders. One never knows what might pop up, and I am always interested in reports of oddities.

Jim, as usual, I thoroughly enjoyed this, your latest post. I never comment but always look forward to reading all that you write.

My husband believe he saw a ladder back wood pecker at our suet feeder yesterday (we live near Alum Creek in Delaware County). Wondering if anyone else has seen this bird.

Well, a Ladder-backed Woodpecker would be truly extraordinary! It’s a resident of the SW U.S. into Mexico, and seldom wanders from its core range. I don’t think there has ever been a record east of the Mississippi.

A male Blue-winged Warbler along the Black River in Cheboygan County, Michigan on May 19, 2021. I heard the bird singing, and eventually m...