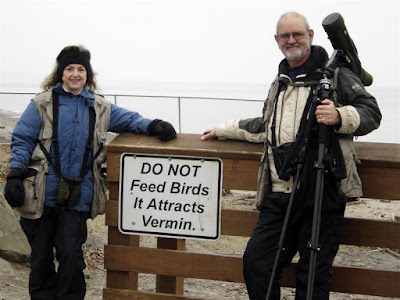 Many of my friends will have fond memories of Hugh Rose, and scores of birders met Hugh (and his wife Judy) at birding events, somewhere in the field, or during his time working as manager of the Black Swamp Bird Observatory's store at their Magee Marsh headquarters. Hugh was a gentleman through and through, and will be missed greatly. My condolences to Judy.

Following is an obituary written by one of Hugh's many friends, outdoorsman and newspaperman Steve Pollick. The photo is mine, from some Hu-Dee adventure along Lake Erie :-)

Mr. Rose was born Feb. 22, 1947, on the Caribbean island of Barbados, where his father was a member of the British diplomatic corps. He later moved with his parents to Canada, where, at age 18 he joined the Royal Canadian Regiment of the Canadian Army, serving six years honorably and with distinction. He attained the non-commissioned officer rank of staff sergeant, and was in charge of a heavy weapons squad. He greatly enjoyed military ceremony, including marching in full-dress uniform with classic “bearskin” hat.

“We were absolutely inseparable,” said his wife, Judy Kolo Rose, who survives. “Everyone called us ‘Hu-Dy’ ”.

Avid birders, the couple traveled widely in their birding pursuits, celebrating their 30th wedding anniversary on a wild trek to Barrow, Alaska, at the northwest tip of North America.

After military service, Mr. Rose entered retail sales and in a short time became associated with the jewelry business, which became his lifelong career. He followed his career, then with Barry’s Jewelers, to the United States, moving to California in the late 1970s. He eventually associated with Sterling Jewelers, parent company of such subsidiaries as Zales, Kay, and Jared. In time he attained the position of a corporate vice president, in which he was engaged in establishing new stores across the country. He retired in 2014.

Mr. Rose proudly became an American citizen in the 1980s, and reveled in flying the American flag at his home. “This one is The Boss,” he would say at flag-raising.

He met his spouse in California, while still with Barry’s Jewelers. They were married on June 10, 1989.

They moved with his Sterling career to Augusta, Georgia, and later to the Cleveland, Ohio, area, from where he retired. The couple moved shortly thereafter to the Oak Harbor area, in part to take advantage of the western Lake Erie region’s renowned birding opportunities.

Mr. Rose for a period served as manager of the gift shop at the well-known Black Swamp Bird Observatory, which has headquarters at Magee Marsh State Wildlife Area near Oak Harbor, near their
home.

The couple in earlier years were avid ocean sailors and scuba divers, and also enjoyed camping and backpacking. They were active ham radio operators and amateur meteorologists. Even now their home
weather station uploads data to the National Oceanic and Atmospheric Administration’s forecasters every 10 minutes.

When posted at one point in Salt Lake City, Utah, Mr. Rose also enjoyed backcountry mule deer hunting with friends, often recalling how it was his camp job to keep the hunting knives sharp.

In 2017, the couple moved back to California, to Rancho Palos Verdes, to care for Mrs. Rose’s parents. But they returned to Ohio semi-annually to visit friends and enjoy the birding.

A memorial farewell service will be set later.
at January 15, 2021