Gray squirrel and its unusual drey a source of enjoyment 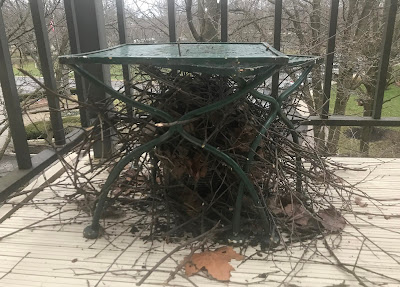 Gray squirrel and its unusual drey a source of enjoyment

Columbus Dispatch
January 17, 2021
NATURE
Jim McCormac
If we had a keen vision of all that is ordinary in human life, it would be like hearing the grass grow or the squirrel's heart beat, and we should die of that roar which is the other side of silence.

The eastern gray squirrel is one of our most common mammals, and their conspicuousness makes them obvious to about everyone.

Although backyard feeders of birds might wage war against wily seed-plundering squirrels, even they will have to concede that a certain level of admiration is warranted. The nonstop hijinks, arboreal acrobatics and problem-solving abilities put squirrels in their own league.

Come winter, plunging temperatures create a challenge for squirrels. True to form, they’ve come up with a solution.

Although gray squirrels use tree cavities as den sites, leafy nests known as dreys also are constructed. A drey is about the size of a basketball and is virtually always placed high in the limbs of trees. Dreys are conspicuous after the autumnal leaf drop.

Squirrels rely heavily on their dreys in winter to stave off freezing temperatures, especially when the mercury plunges at night. Sometimes two or more squirrels share the same drey, and their collective body heat might warm the nest interior to temperatures far beyond that of the outside. Research has shown that the innards of an occupied drey can be an astonishing 60 to 85 degrees warmer than the ambient temperature.

On Dec. 28 of last year, I was visiting my mother, Martha, at her third-floor apartment at Dublin Retirement Village. Squirrels are plentiful there, and Mom loved watching them race about the trees outside her windows.

To my astonishment, a squirrel was constructing a drey under a table on her small balcony. It was a most atypical nest site, and we watched construction progress with interest.

The squirrel began by snipping scores of small branches from adjacent trees, and dexterously wove them into a latticework between the table legs. Once the superstructure was sound, it began harvesting dead leaves. Within a day or so, it had thoroughly shingled the nest with leaves, creating a nearly watertight home.

Mom had been in declining health for some time and at this point depended upon a wheelchair for mobility. As the squirrel drey was three feet from the sliding-glass door, my brother Mike or I could wheel her into position for a ringside seat to its activities.

That squirrel was a source of entertainment for her, between its fevered nest-building and occasional wild chases with other squirrels that dared to intrude on its balcony.

As it turned out, this odd deck-dwelling squirrel was the last wild animal my nature-loving mother would get to watch. She drew her last breath at 3 a.m. on Jan. 4, three days after her 92nd birthday. My brother, his wife Patrice, daughter Megan, and I were at her side.

Shortly after mom’s passing, we retreated to the family room to decompress, and Megan said, “There’s that squirrel!” The bushy-tailed beast had emerged from the nest, and was sitting quietly on the corner of the balcony.

Gray squirrels are strictly diurnal, and that’s the only time that I’ve seen one out in the middle of the night. It was as if it was there to send us a message.

Maybe the squirrel was my mom’s spirit animal. It certainly brought her joy in her last days.

Thinking of you with caring thoughts and deepest condolences after reading of your mother's passing.

It was fun to read of her interest in the gray squirrel drey being built on her porch and so exciting that she had such a view
as it worked hard to get it's winter home ready! That's a very special occurance and even more special to read about the squirrel sitting outside after her passing. All things happen for a reason.

Thank you for sharing this very meaningful story with all of us!

Dear Jim,
I knew your parents many years ago, when my children were young. They were always gracious and kind and we spent many hours swimming at their pool. One of my favorite memories of your mom was when she showed me her wildlife area where she happily gardened and then “when I get hot, I jump into the pool!” I think of her often. Your story brought a tear to my eye as I thought of her enjoying that squirrel and its nest. I’m glad you could be with her at the end.
Julie Tufano

Of Squirrels and Presbyterians

Compared to squirrels
I don't think there's anything
that great about being a human.

I'm unaware of any homeless squirrels.
The building materials for their nests -
their homes-doesn't cost them on red cent,
they pay no mortgage, they pay no rent.

Their life's a smorgasbord with no ccashier.
I see them scamper about, their mouths
full of acorns. Some they bury,neatly
patting the earth back over their stash,
alternating with their front paws as if
smoothing a bed sheet. Certain flowers
consumed as salad, all sorts of seeds, hors d'oeuvres of grubs and selected bugs.

Scampering about gathering acorns
they break for a rollicking game of tag,
whenever the notion strikes, chasing a buddy around and around and up and down a tree, and then they'll perch on a limb and
watch me pass by. I wonder what they're thinking. Do they pity me? Comparatively
I think they should.

They don't need credit ratings, or cars, or careers, or long underwear. Just themselves and a tree is all they ever need. They don't fret about sin, they appear unconcerned about salvation. "Saved
from what?" they might ask.

I envy their lives. They suffer under no pandemic, they're unconstrained by 'social
distancing.' Politics - "what's that?"

I guess they listened and didn't eat the
forbidden fruit of knowledge of good and evil. I guess, in the beginning, they obeyed. They're all so happy now.

How I wish I could join them.
Should I end up in heaven,
if there're no squirrels up there,
I'd rather be elsewhere.

I much prefer their company
to Presbyterians.

LOVED THIS ARTICLE AND SORRY FOR YOUR LOSS.

IT IS NEAT THAT SHE WAS ABLE TO ENJOY SUCH A SITE AND SO CLOSE UP. IT IS INTERESTING HOW GOD CAN GIVE ENJOYMENT WHEN LEAST EXPECTED.