A bizarre "unisexual" salamander scrambles over some old elm bark in its single-minded drive to reach its ancestral breeding pool. This salamander is a blend of any of a few of several species, or maybe all: blue-spotted, Jefferson, smallmouth, and tiger. I have written more about the unisexuals in THIS POST from a number of years ago. I'm not sure they - the experts - know much more about them now then they did back then.

Last Saturday night was the first potentially good run for salamanders in my neck of the woods. It was about 50 F, and mild showers dampened the ground. That's when the mole salamanders in the genus Ambystoma emerge from subterranean pairs and march overland to their breeding pools. For whatever reason, not many were on the move in the west-central Ohio locale where I hunted. Maybe it wasn't wet enough. Only two of the aforementioned unisexuals were found. But, a major Holy Grail and the species that I was most interested in finding did reveal itself. 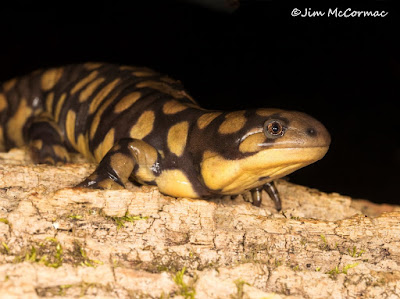 Yes! A whopper of a tiger salamander! I was just about to throw in the towel after lots of country lane cruising when this bruiser appeared on the road. It was about 9 inches long - they can get nearly a foot in length - and smack in the middle of the wet pavement. After a brief photo session, the animal was placed in wet grass well off the road, on the side that he was headed for. Good thing, too, as several cars whipped along while I was working with him, and the slow-moving amphibian surely would have been pancaked. Road mortality in salamanders is a significant threat in some areas.

Tiger salamanders are among our rarer amphibians, and I'd dare say most people haven't seen one. Big ones like this are a sight to behold, and finding one - better yet, many - makes the late wet nights well worth venturing out in.

I'd say the big salamander runs are still in the future, and I'll do my best to be out there for them. Expect some more salamander imagery before long.

Wow, what a huge salamander! I had no idea they got that big in Ohio but fear that in near by Virginia habitat loss etc means we don't have them anymore. Need to look more closely.

Very nice photo. Our seasonal pools are still frozen so it will be a while until they start moving.